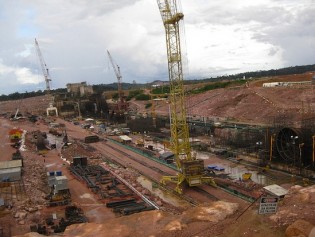 By Cléo Fatoorehchi
Numerous non-governmental organisations used the World Water Forum (WWF) held in Marseille last week as an opportunity to remind the international community about the serious global impacts of large dams all over the world.

By Cléo Fatoorehchi
Back in 2001, Gérard Mestrallet, CEO of the transnational water giant GDF- Suez, highlighted his company’s "commitment to fight for better access" to safe water and sanitation throughout the world, in order to put an end to all deadly water-borne diseases, from children’s diarrhoea to parasitic diseases to dysentery.

By Cléo Fatoorehchi
Months of protest across the European Union, sparked by ‘indignant’ youth demanding an end to the brand of free market capitalism that has blighted the continent with an unemployment epidemic, finally bore fruit on Jan. 30 when Jose Manuel Barroso, president of the European Commission, proposed an ambitious jobs scheme.

By Cléo Fatoorehchi
Last Friday Benoit Miribel, President of Action Against Hunger, delivered a strong indictment of the outcome of the Group of 20 (G20) summit in the south of France: "The G20 meeting in Cannes has been a missed opportunity."

By Cléo Fatoorehchi
Anti-globalisation and anti-capitalist groups are gathering ahead of the G20 meeting in Cannes in the south of France next week.

After Torture, Homelessness Is Lucky

By Cléo Fatoorehchi
When Saoul decided to take the risk of leaving Chechnya for France, he could not imagine how much trouble protection could mean once he got here.

ENVIRONMENT DAY: Better to Plant a Tree Than Curse the Desert

By Cléo Fatoorehchi
With deforestation claiming 5.2 million hectares annually and governments seemingly incapable of agreeing on a new pact to curb climate-altering carbon emissions, it would be easy to write off the situation as hopeless.

Q&A: “Clergy Sexual Abuse of Women Is a Violent Abuse of Power”

By Cléo Fatoorehchi
Ninety to 95 percent of victims of clergy sexual exploitation are women, according to recent estimates by the Columbia Theological Seminary's Rev. Pamela Cooper White, and yet very few studies have been conducted on this issue.

By Cléo Fatoorehchi
Groups peddling the widely discredited notion that gay people can be "cured" of their sexual orientation are encountering staunch resistance to their message, even as converts insist that they are leading happier lives.

By Cléo Fatoorehchi
Migrant domestic workers often toil under difficult and abusive conditions out of sight of the world's eyes. "Individual migrant domestic worker have virtually no possibility to negotiate for better working conditions before moving to the country of employment," Martin Oelz, International Labour Organization's legal specialist in the Conditions of Work and Employment Programme told IPS.

By Cléo Fatoorehchi
When Malika, 21, fled her parents' house in the U.S. state of Virginia three years ago to escape a forced marriage in Iran, she did not expect to end up homeless and living in shelters.

Time to Drag Sextortion into the Light

By Cléo Fatoorehchi
In their 2010 book "Half the Sky", Pulitzer Prize-winners Nicholas Kristof and Sheryl WuDunn write about a disturbing but not uncommon problem in Southern Africa - male teachers who trade good grades for sex with students.

Q&A: Putting the Force of Law Behind Women’s Rights

By Cléo Fatoorehchi
The two-week Commission on the Status of Women at United Nations headquarters draws together a wide array of civil society leaders as well as policy-makers and U.N. development experts to compare notes on the many facets of women's empowerment.

Q&A: ‘Responding As We Would To A Friend In Crisis’

By Cléo Fatoorehchi
Working with grassroots organisations is the only viable way to genuinely help people, according Yifat Susskind, the newly appointed Executive Director of the New York-based women's organisation MADRE.

By Cléo Fatoorehchi
This past September, world leaders meeting at the United Nations vowed to spend $40 billion over the next five years to save the lives of more than 16 million women and children dying of deadly diseases or lack of medical care, particularly during and after pregnancy.

Q&A: “Child Marriage Is a Form of Violence Against Women”

By Cléo Fatoorehchi
At the start of this month, the U.S. Senate unanimously adopted the 'International Protecting Girls by Preventing Child Marriage Act'. Women's rights groups are now urging the Congress's lower chamber to pass it before adjourning at the end of the year.

By Cléo Fatoorehchi
In countries around the world, small farmers are trapped in a vicious circle - hard-pressed governments don't invest enough money in local agriculture, and local producers find themselves driven off their lands and into urban slums, where they sink even deeper into poverty.

Q&A: “More Women Peacekeepers Is Not the Solution”

By Cléo Fatoorehchi
For two decades, women around the world have marked "Sixteen Days of Activism Against Gender Violence", which fall between the International Day for the Elimination of Violence Against Women on Nov. 25 and International Human Rights Day on Dec. 10.
ADVERTISEMENT ADVERTISEMENT