AIX-EN-PROVENCE, Feb 6 2012 (IPS) - Months of protest across the European Union, sparked by ‘indignant’ youth demanding an end to the brand of free market capitalism that has blighted the continent with an unemployment epidemic, finally bore fruit on Jan. 30 when Jose Manuel Barroso, president of the European Commission, proposed an ambitious jobs scheme. 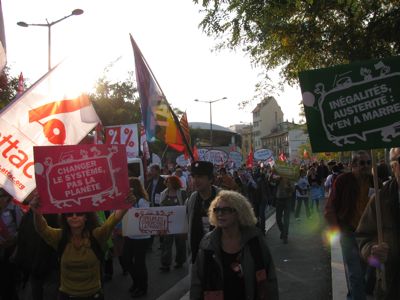 Protesters at an anti-G20 rally in Nice, France, in November 2011 demanded an end to Europe's austerity programme. Credit: Cléo Fatoorehchi/IPS

“We cannot accept that almost a quarter of Europe’s young people are unemployed,” he stressed during the last informal EU summit, referring to Eurostat’s Dec. 2011 proclamation that 22 percent of the youth labour force – roughly five and a half million young people in the region – are without work.

The details of the estimates are alarming: youth unemployment stands at 48.7 percent in Spain, 47.2 percent in Greece and 35.6 percent in Slovakia.

Barroso sent a letter to the eight member states with the highest levels of youth unemployment – Spain, Greece, Slovakia, Lithuania, Italy, Portugal, Latvia and Ireland – requesting their special cooperation with the Commission’s proposal.

“I will be proposing the creation of joint ‘action teams’ comprised of the Commission, member states and national social partners, to come up with targeted plans by April to help tackle youth unemployment. I also want member states to commit to a ‘Youth on the Move’ pact to ensure that all our young people are either in a job, in education or in training within four months of leaving school,” he said at the EU summit.

Though many consider the proposed solutions inadequate compared to the magnitude of the problem, ‘los indignados’ nevertheless commended the move as a long-overdue acknowledgment of the crisis.

“They (the decision-makers) understood they cannot continue to overlook this burning issue of youth unemployment,” Kim Le Quang, a young Belgian “indignado,” and one of the country’s coordinators, told IPS.

He explained to IPS that the movement is motivated by the change in policies and actually sees it as a sign of hope.

Since the Anti-G20 Summit in Nice last November, the indignados met regularly to discuss and devise new strategies for mobilisations against the austerity plans in Europe that gutted – and continue to slash – public spending.

Many hope that Barroso’s announcement is only the beginning of greater change.

“As soon as March arrives, and with it spring, we will go into the parks again to put into place (people’s) assemblies,” Kim said, adding that numerous actions will take place throughout May in commemoration of the one-year anniversary of the 15-M movement in Madrid.

Meanwhile, plans for an international activist conference, scheduled for February at the European Central Bank headquarters in Frankfurt, are well underway. The conference will double up as a platform for protest against “austerity measures dictated by the profiteers of the financial and economic crisis,” according to a Jan. 22 press release.

Though these preparatory meetings still gather at least a hundred of activists from all over Europe, Kim acknowledged that the movement’s lack of organisation might hinder its growth.

He recalled a mobilisation in Brussels becoming too technical and suffering from faulty translation, thus driving most of the attendees away early, though he hastened to add that the horizontal mode of operation was key to the movement’s success.

“There is the will to make this the most horizontal and the most democratic movement possible; and democracy takes time,” he said.

He justified these organisational problems as a result of careful attempts to guard against co-optation by a union or political party. The protesters believe that change will come from the people themselves and have refused to let the occasional lack of clarity impede their momentum.

“The movement has been built on a long-term basis,” a Parisian ‘indignado’ named Gary, told IPS. “We are waiting for results to come. For now, we are focused on some core issues,” such as expanding the mobilisation and fight against economic austerity in Europe.

Gary, though not one of the most active indignados, has not abandoned the movement.

“For the moment, this is the only alternative we have,” he said.

Another French activist, Zum, insisted: “to protest, to demonstrate to political leaders that society does not agree with them …is the only way to change the world.”

Both are convinced this is the main reason why the movement could go on for years, until governments take the necessary measures to dress deep social wounds.

Kim also believes that the movement’s success is derived partially from its global scope.

Still going strong in over 1000 cities around the world from the Occupiers to the Arab Spring activists, the persistence and successes of each movement seem to fuel the others.

The next issue the indignados plan to fight is the privatisation of water, at the next World Water Forum in Marseille from March 12-17.

For two years, organisers have been planning an Alternative World Water Forum, which will take place during the same week as the official meeting, just a few kilometres away. The people’s convergence plans to draw together numerous associations, experts and citizens to address the critical water issues that, Kim concluded, governments and international organisations have so far failed to solve.