Stories written by Marwaan Macan-Markar
Marwaan Macan-Markar is a Sri Lankan journalist who covered the South Asian nation's ethnic conflict for local newspapers before joining IPS in 1999. He was first posted as a correspondent at the agency's world desk in Mexico City and has since been based in Bangkok, covering Southeast Asia. He has reported from over 15 countries, writing from the frontlines of insurgencies, political upheavals, human rights violations, peace talks, natural disasters, climate change, economic development, new diseases such as bird flu and emerging trends in Islam, among other current issues. 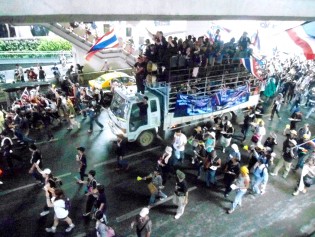 By Marwaan Macan-Markar
Thailand’s flood-management blueprint  received a jolt when the dykes in Sukhothai were breached by the rain-swollen Yom river last week, submerging large stretches of the former royal capital.

By Marwaan Macan-Markar
In a country where talk of a ceasefire brings representatives from 11 different armed ethnic groups to the table, Myanmar’s chief peace negotiator, Railway Minister Aung Min, is experimenting with an unusual solution to decades of separatist struggles.

By Marwaan Macan-Markar
The gentle hills on the edge of this remote town are lush with tropical fruit trees that yield fine wines  for the Broadchem Corporation and also give the agro company a green label.

By Marwaan Macan-Markar
The just-ended United Nations sustainable development summit in Rio de Janeiro has exposed the discomfort that many developing Asian countries have over buzz words like ‘green economy’ and ‘green growth’ in development diplomacy.

By Marwaan Macan-Markar
Reports of sectarian violence in western Myanmar have exposed the plight of 800,000 Muslim Rohingya, a persecuted minority that a regional human rights body described in 2006 as facing a "slow-burning genocide".

By Marwaan Macan-Markar
On a humid islet covered with mangroves, Lucena Duman and her neighbours have found a route out of poverty. They work as conservationists and tour guides in this isolated corner of the Philippines.
Next Page »
ADVERTISEMENT ADVERTISEMENT