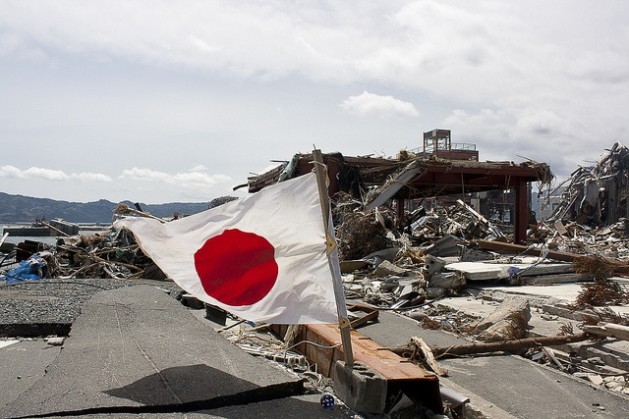 A Japanese flag standing amidst the rubble of the March 2011 tsunami. Credit: Daniel Pierce/CC-BY-2.0

MINAMISANRIKU, Japan, Mar 19 2013 (IPS) - As a survivor of Japan’s deadliest tsunami in living memory, Shun Ito dedicates his mornings to evoking stories of heroism that helped to save lives in this port town that was decimated on that fateful March afternoon two years ago.

Two names – Miki Endo and Takeshi Miura – frame the narrative that 37-year-old Ito shares with visitors as he guides them through this once quiet fishing resort, which still bears the scars of devastation left by the powerful waves on Mar. 11, 2011.

Among the few, gutted buildings still standing across empty stretches are the skeletal remains of the three-storey disaster-preparedness centre, where Endo and Miura served as radio operators.

They worked on the second floor and sent out messages through the town’s loudspeakers for people to get to higher ground as the tsunami approached, recalls Ito, who works as a receptionist at a hotel on the edge of this town.

“They remained at their job, giving warnings, even when it was known that the waves were higher than the building they were in.”

“They gave their lives to save others in this town,” adds Ito, standing in front of an impromptu memorial, complete with fresh flowers, which has come up near a blown-out wall of the centre. “We have to remember their sacrifice.”

Minamisanriku lost 1,206 of its 17,000 residents in March 2011, when 16-metre-high waves crashed over the town’s existing tsunami barriers barely 30 minutes after the powerful 9.0-magnitude earthquake ruptured the seabed some 130 kilometres from Japan’s Pacific coastline.

The death toll could have been higher, thousands more, had it not been for the work ethic of Endo, Miura and other members of Japan’s well-drilled disaster response management programme, spread across the 12 prefectures along the coast, who sounded the alarm to save lives.

And as Japan remembered the 15,880 people who were killed and the 2,694 people still missing after the twin terrors of the earthquake and tsunami, the role of the first responders, so pivotal in disaster preparedness efforts, was celebrated.

The ones who died or went missing during their call of duty, like Endo and Miura, include 254 firefighters and volunteer fire corps, 30 police officers and three members of the country’s self defence force, according to official records.

“People tend to forget, that is why such storytelling is important,” affirms Fumihiko Imamura, a senior academic at the International Research Institute of Disaster Science at Tohoku University. “These soft measures help to plan rebuilding and to protect people from the next tsunami.”

Such stories are being added to the graphic video footage of the raging waves crashing through towns as they surged many kilometres inland.

“The video material and other records in the media offer a more comprehensive picture to remember what happened,” Imamura said in an exclusive interview with IPS. “So when communities in the Tohoku region design buildings and plan escape routes, (information about) the height of the waves and how far inland they came will shape their decisions.”

In fact, the practice of stitching together a tapestry of memories and storytelling by members of the devastated communities taps into a Japanese tradition of “handing down memories” that goes back centuries.

The coastal region of this earthquake-prone and tsunami-hit country bears out these narratives in the form of carved warnings on stone tablets.

The memorial stones and rocks, some nearly three metres tall, have clear messages, such as: “If an earthquake comes, beware of tsunamis”, or another, which says, “Do not build your homes below this point”.

Hundreds of these warnings from the past, some 600 years old, are viewed in this corner of Japan as a glimpse into a world that placed a premium on knowledge sharing in order to survive regular battering from the sea.

But some residents honour the warnings of old as proof that previous victims of deadly tsunamis did not die in vain and that their wisdom ensures successive generations live in safer areas.

This culture of keeping collective memory alive has taken other forms further inland, such as in the southern city of Kobe, which was hit by a devastating earthquake in January 1995 that killed 6,434 people.

There, an earthquake museum has emerged as the centerpiece of efforts to keep alive the memory of the temblor that struck at dawn.

The 500,000 visitors who walk through its halls every year are not only offered visual presentations of what happened, but they also get to hear real accounts from 40 survivors who are part of the museum’s 160 volunteer staff.

“This is a very effective way for the visitors to feel what happened,” admits Masahiko Murata, director of the Kobe-based Disaster Reduction and Human Renovation Institute. “It is direct, human to human.”

Lessons from past disasters have also begun filling the pages of textbooks being distributed throughout Japan’s school system, adding a new layer to the country’s laudable efforts to reduce the impact of disasters.

“Disaster management manuals for schools are important to prepare future generations,” Murata told IPS. “We need to always keep transferring lessons to the next generations who have not experienced disasters and need to know what to do when caught in one.”

For Ito, one of those lessons is obvious. Minamisanriku’s new disaster preparedness centre should be a taller building and in a safer location to protect future radio operators. “We should do that for the sake of the two radio operators who died in 2011,” he says. “Mr. Miura was my friend. We coached the sports teams at the local school together.”