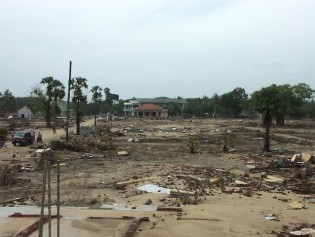 By Baher Kamal
While negotiators from all over the world have been discussing, since 31 October 2021 in Glasgow, every single word, coma and dot in order to reach a final text that is expected to apparently keep everyone happy but really not everybody satisfied, 50% of world’s population will live in coastal areas, exposed to floods, storms and tsunamis by the year 2030.

By Amantha Perera
Soon after the deadly tsunami struck Kesennuma city in the Miyagi Prefecture in Northern Japan on Mar. 11, 2011, 59-year-old Naoko Utsumi found herself on the rooftop of a community centre with only one line of communication to the outside world – the email option on her mobile phone.