SANTIAGO, Mar 1 2013 (IPS) - The reconstruction of the fishing village of Boyeruca, destroyed by the tsunami that swept over central-south Chile on Feb. 27, 2010, was meant to serve as a model of ecological and sustainable reconstruction.

But progress has been hindered by bureaucracy and disorganisation, and three years later, a vulnerable community continues waiting to rebuild their lives.

Boyeruca is a village in the “comuna” (county) of Vichuquén, 293 kilometres south of Santiago on Chile’s Pacific Ocean coast. Its 300 residents have always earned their livelihoods from the sea.

The 8.8 magnitude earthquake and subsequent tsunami, which caused severe damages and losses for millions of people along a 600-kilometre strip of the Chilean coast, destroyed 80 percent of the homes in Boyeruca.

According to eye-witness accounts, the sea “rose up three times.” The first tsunami wave resulted in only minor damages, but the second destroyed practically everything in its path. 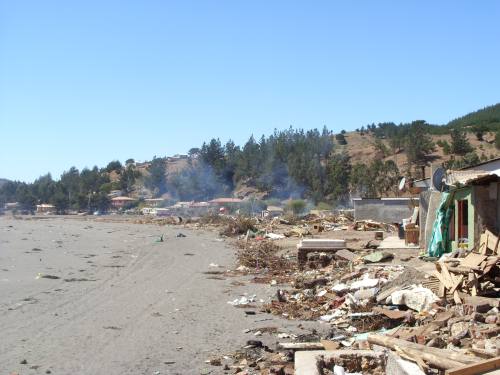 The fishing village of Boyeruca after the tsunami. Credit: Courtesy of IEP

To deal with the damages, an alliance of civil society organisations, private companies, environmental organisations and religious groups, coordinated by the Institute of Political Ecology (IEP), joined forces in a campaign for the sustainable reconstruction of the village.

“After our first visit to Boyeruca, we observed such a lack of everything that we decided to launch a campaign to contribute to reconstruction,” IEP communications coordinator Claudia Lisboa told Tierramérica*.

The joint initiative was aimed at the creation of an “eco-village” powered by renewable energy sources to promote local productive development.

Barrick Gold Corporation, a Canadian mining company, took charge of rebuilding the local school, which was relocated to the hills of Boyeruca to protect it in the event of another earthquake and tsunami in the future.

For its part, the collective redesigned the school library with an environmental theme, through donations of books and publications on environmental issues and the installation of pine wood furniture.

“With the help of a group of students from the University of Amsterdam in the Netherlands, we rebuilt an ‘eco-classroom’, and a group of Chileans and other Latin Americans in Nuremburg, Germany helped us restock the library. We also conducted a study for the creation of an eco-friendly school garden, which is still pending,” said Lisboa.

Another group, led by psychologist Carmen Colomer, has provided integral mental health care and counselling for children and older adults.

“We have held workshops at the school, in the form of ‘story time’, and have provided support for the organisation of the library, the design of small-scale production projects, and the creation of a community fund, based on the experience of the ‘banks for the poor’,” said Colomer, referring to the Grameen Bank microcredit scheme founded in Bangladesh.

Hortensia Guerrero, a member of the Libertad fisherpeople’s union of Boyeruca, told Tierramérica that the non-governmental organisations provided “real” assistance that was extremely helpful to the community at the time.

But due to the sluggish bureaucracy of municipal and national authorities, “today people are living worse than before,” she said.

In 2010, local families were moved to higher ground, far from the coastline where their homes had been demolished. But they have returned to this “danger zone” where they now live in precarious housing, haunted by the ghosts of the peaceful life they once led.

In early 2012, the authorities promised that they would build decent housing on high ground, but this has yet to happen, reported Guerrero. “People are living without drinking water and without electricity.”

Before the tsunami, the village’s main attraction was an estuarine lagoon where Pacific oysters (Crassostrea gigas) were raised.

“The oyster nursery was what attracted tourists to Boyeruca. But the tsunami washed sand into the lagoon, so that where the water used to be four metres deep, it’s now only half a metre or 20 centimetres deep,” said Guerrero.

The lagoon was also rich in bird life, including black-necked swans, red-gartered coots and various species of wild duck, which are no longer found here.

Local residents formerly used the salt flats of Boyeruca to process table salt as well. But this source of livelihood was also lost after the tsunami.

“There used to be a precious wetland, with a stream where we used to get water. But an unscrupulous individual went in with heavy machinery and diverted the stream, destroying the wetland, which used to stretch almost a kilometre,” said Guerrero.

At press time the Chilean authorities had still not released official figures on housing reconstruction three years after the earthquake. But government spokespeople have reported that 85 percent of overall reconstruction has been completed, and that 75 percent of the new homes needed have either been delivered or are currently under construction.

President Sebastián Piñera pledged that reconstruction would be complete by the end of his term, in March 2014. This would imply the repair of 110,000 homes and the construction of 112,000 new homes, according to the Ministry of Housing.

For Tusy Urra, coordinator of the National Movement for Just Reconstruction, the real situation does not match up with official figures.

“Many of the victims lost everything but have not even been able to submit the documentation to apply for a subsidy,” she stated.

In addition, “the process has been very slow, and many families continue to suffer the indignity of living in ‘mediaguas’ (prefabricated wood shelters without bathrooms) or with relatives or friends,” Urra told Tierramérica. “There is no plan with policies aimed at sustainability.”

Reconstruction has been targeted to meeting “immediate” needs, and because of this, “the government has missed out on a great opportunity,” she added.

“The ideal approach would have been housing construction policies adapted to the new times and the needs of neighbourhoods, preserving their history, their heritage, incorporating new technologies and sustainability. Unfortunately, that hasn’t happened,” she concluded.

*This article was originally published by the Latin American network of newspapers Tierramérica.