ILOCA, Chile, Feb 29 2012 (IPS) - Two years after the earthquake and tsunami in south-central Chile, the worst natural disaster to hit the country in half a century, thousands of families who saw their homes destroyed are still waiting for a solution.

The earthquake measured 8.8 degrees on the Richter scale and lasted almost three full minutes, and was followed by a devastating tsunami. At least 520 people died and close to a million were affected, according to official figures.

Two years later, this house in the coastal town of Iloca still bears witness to the devastating force of the tsunami. Credit: Marianela Jarroud/IPS

In the early morning hours of Feb. 27, 2010, Rosa Núñez, 75, found herself unable to sleep. Nuñéz lives in Iloca, a small tourist town on the Pacific Ocean coast, 300 km south of Santiago. For many years she ran a little restaurant in a house that was washed away by the sea.

Thanks to her insomnia, Nuñez was awake when the earthquake began and ran out of the house, enduring the tremor outdoors. Her home was roughly 100 metres from the coast, and 30 metres from a tree-covered hill where she took refuge along with her oldest son’s family. 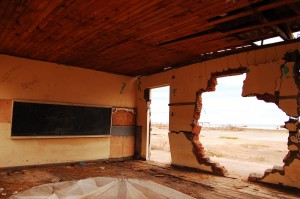 A single classroom in the primary school in Iloca survived the worst natural disaster in Chile in 50 years. Credit: Marianela Jarroud/IPS

Once she was safely up on high ground, she turned her back on the ocean so she would not have to witness the destruction. “I will never forget the sound of the sea destroying everything, washing away everything we had built with so much hard work,” she recalls today.

Two hours later, when she returned with her son, she saw that “the sea took everything away… there were no walls, the sea had swallowed up everything,” Núñez told Tierramérica.

Today she lives in a small, solidly built house that she already owned, across from the house she lost, and that she was able to repair with assistance. Her oldest son lives next door, in a small home he constructed from half of a mediagua (a prefabricated wooden house without a bathroom, meant to serve as temporary housing) that someone donated.

Her youngest son, a fisherman, lives in a wooden cabin with a bathroom in a small housing complex donated by a foreigner. Behind it he is building a more solid, permanent home. Now that her restaurant is gone, Núñez depends on the financial support of her children.

The landscape around Iloca, in the central Chilean region of Maule, has yet to recover its tranquil beauty. The coastline is dotted with ruins. What were once luxurious summer vacation homes still look out over the sea, but are now irreparably damaged.

Just a few metres away, fishermen and rural workers live in camps made up of mediaguas.

According to official figures, 76,000 homes have been repaired or rebuilt in the six regions affected – Bío-Bío, La Araucanía, Maule, O’Higgins, Santiago and Valparaíso – while work is currently underway on another 140,000.

But these figures are disputed by the victims of the disaster, who complain of the slow pace of reconstruction.

Lorena Arce, spokesperson for the victims in the seaside tourist town of Dichato, in the southern region of Bío-Bío, maintains that only 10 percent of the homes destroyed there have been rebuilt, and these belong to low-income families living in camps or temporary settlements the government refers to as “villages”.

The other 90 percent of the families left homeless are middle-class, and many of them are not considered eligible for the government reconstruction program.

Senator Ximena Rincón, of the opposition Christian Democratic Party, told Tierramérica that “the government has fixed the numbers to be able to measure greater progress by mixing reconstruction subsidies with ordinary subsidies.” This results in a lack of transparency that makes it impossible to determine the real progress made, she stressed.

President Sebastián Piñera pledged that his government would repair 110,000 homes and build 112,000 new homes by the end of his term in March 2014. This promise will not be kept, predicts Rincón, a senator for the region of Maule.

“There is going to be a great deal of frustration among the citizens over these broken promises,” she warned.

While touring the six regions affected on Feb. 21-27, Piñera reiterated his pledge that “no family will spend more than two winters living in villages that were created as temporary emergency solutions.” However, he admitted that it will not be possible to achieve this goal by the time the next Southern hemisphere winter begins.

In the meantime, Chilean television stations are broadcasting a government publicity campaign that cost 805,000 dollars about the progress made in reconstruction.

The area affected encompasses a strip that stretches 600 km in length.

Nuñéz and most of the other residents of Iloca and the surrounding area say that they have not seen any government contribution to local reconstruction efforts. They have done what they can to get back on their feet by dipping into their own savings and through private donations of mediaguas and building supplies for the neediest. 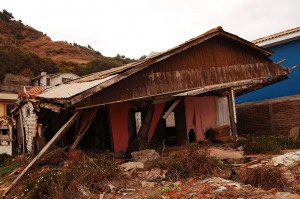 The waves damaged homes in the foothills more than 100 metres from the coast, such as this house in La Pesca, 5 km south of Iloca. Credit: Marianela Jarroud/IPS

Specialists believe that the problem lies in the model for reconstruction, based on the promotion of housing construction through the allocation of subsidies to construction companies.

If the companies deem that the government subsidies fall below the price they would normally charge for the housing constructed, they are simply not interested in such an unprofitable undertaking, and there is nothing the government can do about it.

In addition to the delays, says Lorena Arce, the companies are building homes of lesser quality to compensate for the perceived loss of profitability.

Chile has construction standards to ensure that new buildings are earthquake-proof, but not to ensure that they can withstand a tsunami. This means that the location of new buildings and their proximity to the coast are crucial considerations. Arce reports that properties along the coastline are being expropriated, but, at the same time, large tourism resort-style buildings are being constructed in these same areas.

But she has not given up hope.

“We hope that the government will work conscientiously, that it will recognise that a great deal more construction is needed and that it will provide more resources, because they are needed: reconstruction cannot be done with cardboard. We hope they will show greater will, and adopt state policies that will continue over into the new government that will take office in 2014,” she told Tierramérica.

There are no official figures on damaged or destroyed schools, but many have been replaced with prefabricated modular classrooms, such as those now being used in Iloca, thanks to private donations.

Secondary school students, who in 2011 played a key role in the biggest social protest movement seen in Chile in the 20 years since the return of democracy, are planning demonstrations to protest the slow pace of the reconstruction of schools, while civil society organisations are planning a national public survey on the progress of reconstruction.