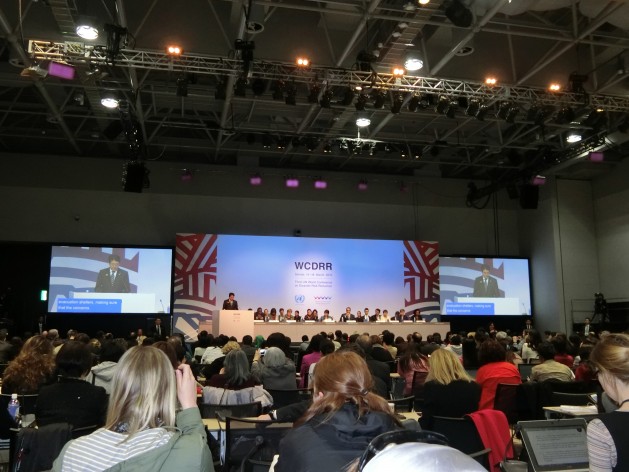 View of the Third World Conference for Disaster Risk Reduction (WCDRR) in Sendau, Japan. Vanuatu’s President Baldwin Lonsdale told delegates he was attending because the Pacific island, hit by Cyclone Pam in early March, “wants to see a strong new framework on disaster risk reduction which will support us in tackling the drivers of disaster risk such as climate change". Credit: Katsuhiro Asagiri/IPS

SENDAI, Japan , Mar 16 2015 (IPS) - Cyclone Pam has not only caused unprecedented damages to the Pacific island of Vanuatu but also lent urgency to U.N. Secretary-General Ban Ki-moon’s plea that disaster risk reduction is in “everybody’s interest”.

“Sustainability starts in Sendai,” Ban declared at the opening of the Third World Conference for Disaster Risk Reduction (WCDRR), the largest-ever high-level meeting on the theme, which kicked off on Mar. 14 in Sendai, the centre of Japan’s Tohoku region, which bore the brunt of the 2011 earthquake and tsunami that led to the Fukushima nuclear power plant disaster.

The conference is expected to conclude with the adoption on Mar. 18, when WCDRR is scheduled to close, of a new agreement on disaster risk reduction, which will provide guidance on how to reduce mortality and economic losses from disasters.

“This is the first stop on our journey to a new future to put our people of the world and this world onto a sustainable path,” Ban told government leaders and civil society representatives from around the world.

Experts consider climate change as the cause for the increasingly unpredictable pattern of cyclonic activity affecting Vanuatu in recent years.

“I speak to you today with a heart that is so heavy,” said Vanuatu’s President Baldwin Lonsdale addressing the opening session, visibly fighting back his tears. “I stand to ask you to give a lending hand in responding to this calamity that has struck us.”

This is indeed a major calamity for the Pacific island nation. Every year it loses six percent of its gross domestic product (GDP) to disasters. “This cyclone is a huge setback for the country’s development. It will have severe impacts for all sectors of economic activity including tourism, agriculture and manufacturing,” said Lonsdale.

“The country is already threatened by coastal erosion and rising sea levels, in addition to five active volcanos and earthquakes. This is why I am attending this conference and why Vanuatu wants to see a strong new framework on disaster risk reduction which will support us in tackling the drivers of disaster risk such as climate change.”

The International Federation of Red Cross and Red Crescent Societies (IFRC) launched an initiative on Mar. 15 to scale up community and civic action on resilience, the so-called ‘One Billion Coalition for Resilience’.

The IFRC has committed itself to mobilising its network of 189 national Red Cross and Red Crescent Societies and 17 million volunteers around the world to increase different services that link disaster preparedness, emergency response and longer term recovery needs of local communities.

“We need to scale up our collective efforts to make sure that hazards don’t become disasters, and we will only be able to achieve this by building alliances at every level,” she said. ”Only in partnership can we contribute to transforming the lives of the most vulnerable people and support their efforts in building stronger communities.”

Apparently realising the need of the hour, top insurers from around the world have called on governments to step up global efforts to build resilience against natural disasters, highlighting that average economic losses from disasters in the last decade have amounted to around 190 billion dollars annually, while average insured losses were at about 60 billion dollars.

A ‘United for Disaster Resilience Statement’ was released Mar. 14 by top insurance companies, members of the UNEP Finance Initiatives’ Principles for Sustainable Insurance (PSI), the largest collaborative initiative between the United Nations and the insurance industry. PSI is backed by insurers representing about 15 percent of the world’s premium volume and nine trillion dollars in assets under its management.

The statement urges governments to adopt the U.N. Post-2015 Framework on Disaster Risk Reduction, emphasising that the insurance industry is well placed to understand the economic and social impact of disasters given that its core business is to understand, manage and carry risk.

Lauding the initiative, Achim Steiner, U.N. Under-Secretary-General and Executive Director of the U.N. Environment Programme (UNEP), said: “The vision and initiative demonstrated by the insurance industry – from the launch of the landmark Principles for Sustainable Insurance at the Rio+20 conference to the strong, united commitments made here in Sendai – provide inspiration and a way forward.”

The voluntary commitments will follow the global framework afforded by the four Principles for Sustainable Insurance, and will show concrete actions that build disaster resilience, and promote economic, social and environmental sustainability.

These commitments will be aggregated and promoted en route to a major UNEP and insurance industry event in May this year, which will be hosted by the global reinsurer, Swiss Re.

The commitments will also be promoted by the PSI at the Global Insurance Forum of the International Insurance Society in New York in June. The forum will include a dedicated day at the U.N. headquarters for insurance industry leaders and U.N. officials to address sustainable development challenges and opportunities, from climate change and disaster risk, to financial inclusion and ageing populations.