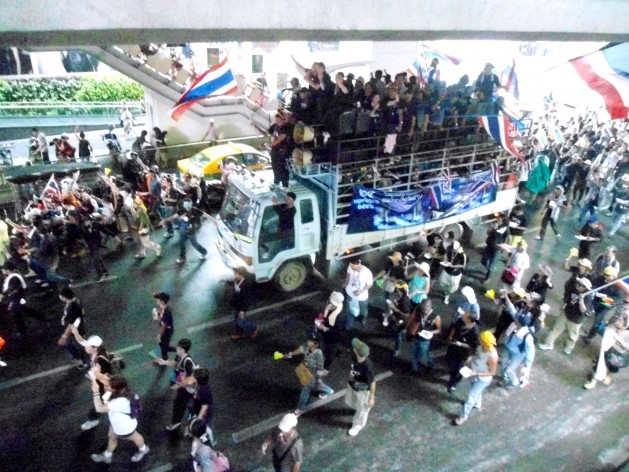 Political protests in Thailand have led to gender attacks on the Prime Minister. Credit: Kalinga Seneviratne/IPS.

BANGKOK, Jan 28 2014 (IPS) - Supaa Prordeengam, a 48-year-old businesswoman, came to take part in the anti-government rallies that have been continuing in the Thai capital for nearly three months now. But disturbed by the sexist speeches emanating from the protest platforms, she said, “We need to be critical, not invade women’s rights.”

The favourite target of the vitriol spewed by the opposition-led agitation is Yingluck Shinawatra, the country’s first woman prime minister. The 46-year-old leader of the governing Pheu Thai Party has been called all sorts of abusive names by the opposition that has occupied five busy intersections here.

“Sexism has been prevalent in Thailand for a long time, but it has lately become a part of political tactics."

It is such words that prompted reflection by Supaa, who is from Samut Sakhon, a province that borders the Thai capital. She was here to join tens of thousands of protestors on the streets and on Blue Sky, the television station that amplifies the views of the opposition Democrat Party.

“They are very emotional, the speeches,” she told IPS. “But it is not right to talk about sexual stuff.”

Many like her have been witness to how the original rallying cry – against government corruption, abuse of parliamentary majority and disrespect of the country’s revered monarch – has morphed into demagogy.

Those making the speeches are from Thailand’s educated class that is being tapped by Suthep Thaugsubana, former Democrat Party deputy chief and leader of the street agitators. The political veteran of over 30 years is eyeing them for his pool of “good people” to serve in his non-elected “People’s Councils” that, he believes, should govern the country for at least a year.

The open comments at the Bangkok rallies, and the rapturous applause they receive, have prompted some soul-searching in the Southeast Asian kingdom about the spectre of ugly sexism in the male-dominated political landscape.

It has taken a while, but Thailand’s mainstream women’s rights groups have finally broken their silence.

“When a network of women’s rights groups issued a statement denouncing a medical doctor for his ugly sexist attacks on caretaker Prime Minister Yingluck Shinawatra, I admit I felt quite relieved,” wrote Sanitsuda Ekachai, a columnist on social justice issues with the English language Bangkok Post. Going by her weekly commentaries, she is certainly no fan of the Yingluck administration.

“For a long time I’ve been wondering why women’s rights groups have remained silent about the slew of degrading, sexist tirades made against Ms. Yingluck by various detractors.”

Among the few groups that have raised the red flag are the Coalition of Democracy and Sexual Diversity Rights. It has berated the “use of sexist, misogynist and denigrating language” as a political weapon. “The continuation of this rhetoric of violence, discrimination and hate cannot be permitted,” it said in a statement.

Yingluck’s rise as the country’s first woman leader has served as a reality check for Thailand’s feminist and women’s rights advocates. The latter gave her a cold shoulder when she led the Phue Thai Party to a thumping win at the July 2011 general elections to become, at 44, the youngest prime minister in 60 years.

Her position, they argued, was not the result of her own doing but the machinations of her elder brother, Thaksin Shinawatra, the twice-elected former prime minister who was deposed in a military coup in September 2006. Statements by Thaksin, who lives in self-imposed exile to avoid a two-year jail term for corruption, did not help.

When he plucked Yingluck out of her career as a businesswoman and nominated her to head the Phue Thai weeks before the poll, he publicly declared that the younger Shinawatra was his “clone”.

The typical display of Thaksin’s arrogance was grabbed by the largely Bangkok-based women’s groups known for being closer to the Democrats, who have not won a parliamentary majority in 20 years.

“How can we be proud? The whole world knows it’s about Thaksin,” commented a leading figure at the Gender and Development Research Institute in a newspaper report, under the headline, “Thailand’s first female PM no victory for feminism”.

“It is worth noting that while many leading Thai feminists are lukewarm at best or dismissive at worst at Yingluck’s sudden rise to power, men seem more willing to withhold judgement at this early stage,” Kaewmala, a prolific Thai blogger who comments on social issues, wrote at the time. “As most observers are tentative of the kind of leadership Ms. Yingluck will offer, her current support comes more often from men.”

By August last year, when Yingluck marked her second anniversary as premier, she was receiving kudos for a non-confrontational and consultative style of leadership that had managed to usher a sense of normalcy on Bangkok’s streets. Comparisons were made between her elected administration and the two-and-a-half-year administration that preceded her – a coalition government led by the Democrats that came to power through a backroom deal hatched by the powerful military.

The Democrat administration was tainted by the bloody showdown on Bangkok’s streets in May 2010 during a clash between pro-Thaksin protesters and the military. It left 91 people dead, at least 80 of them civilians, and more than 2,000 injured.

Yingluck’s beleaguered administration has avoided a hawkish response, enabling the would-be revolutionaries rallying to topple her government to lay siege on many government buildings. Confrontations with the riot police, clashes between the agitators and pro-Thaksin sympathisers, sporadic shootings and grenades lobbed at rally sites have resulted in nine deaths, with over 550 injured since November.

But what is really different since the 2010 showdown on Bangkok’s streets is the “sexist war” – perhaps reflecting the growing frustration of the agitators and a new low in Thailand’s political turmoil that has steadily divided the country since the 2006 coup.

Pavin Chachavalpongpun, a Thai academic at the Southeast Asian Centre at Kyoto University in Japan told IPS, “Sexism has been prevalent in Thailand for a long time, but it has lately become a part of political tactics. It has intensified since Yingluck become prime minister. I have never seen anything like this, on this scale.”