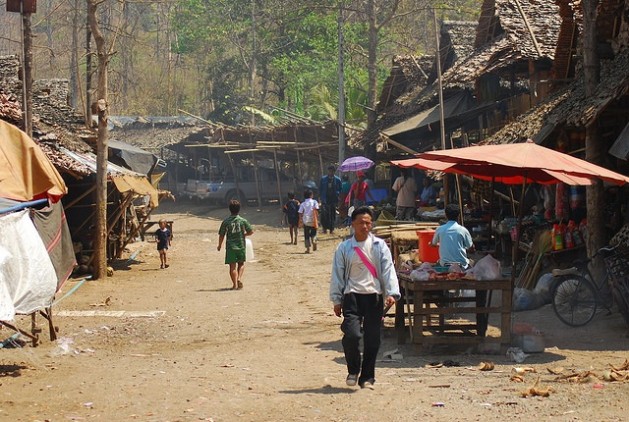 A refugee camp in Mae Sot, a town on the Thai-Burma border where peace talks are being held. Credit: Mikhail Esteves/CC-BY-2.0

MAE SOT, Thailand, Aug 3 2012 (IPS) - In a country where talk of a ceasefire brings representatives from 11 different armed ethnic groups to the table, Myanmar’s chief peace negotiator, Railway Minister Aung Min, is experimenting with an unusual solution to decades of separatist struggles.

Since launching his ceasefire initiative in September last year, the minister has traveled around Myanmar (also known as Burma) and neighbouring countries without so much as a nod to the possible role of foreign observers or international peace facilitators.

“It is unlikely that the government wants third parties at this stage of ceasefire talks and we are okay with this arrangement for now,” Zipporah Sein, the 57-year-old general secretary and first female leader of the separatist Karen National Union (KNU), told IPS during an interview in the group’s office on the edge of town.

“This is part of the trust-building stage that will lead to political and peace talks.”

A formal round of talks that was held in Myanmar last April only allowed three foreigners, including a British and United States diplomat, to witness the negotiations as observers, Sein revealed.

Mae Sot, a town along the Thai-Myanmar border that Aung Min has visited three times in the past year, is a microcosm of the specific challenges of peace negotiations in Myanmar between not just two but multiple ethnic groups, each with their own specific concerns.

For the past two decades this town has been home to the country’s majority Burman community as well as a haven for refugees, mostly from the Karen State, fleeing ethnic violence and persecution.

The ‘Myanmar style’ of peacemaking – one that rejects foreign intervention – is a departure from the customary path similar talks have followed in other Asian countries, where foreign governments or international organisations were recognised as neutral third-parties, tasked with liaising between governments and armed combatants who have been locked in decades-long conflicts.

For instance, Malaysia is currently serving as a facilitator in ongoing peace talks between the Philippines government and the separatist Moro Islamic Liberation Front.

Negotiators led by former Finnish President Martti Ahtisaari helped establish the August 2005 peace agreement between the Indonesian government and the separatist Islamic Free Aceh Movement. And Norway enjoyed a prominent role as the official go-between during the failed peace talks between the Sri Lankan government and the now-defeated Tamil Tiger rebels over a decade ago.

But Aung Min’s challenge is undoubtedly more complex than most other conflicts, and his divergent approach appears to be reaping some rewards.

Between September 2011 and April 2012, his talks have secured ceasefire agreements with 11 armed ethnic groups. Among these accomplishments was the January breakthrough with the KNU, which has been involved in Asia’s longest-running separatist struggle, spanning 60 years.

Still, Sein did not rule out a shift to accommodate an official, independent peace facilitator as the current talks move towards thornier issues, such as the future of the armed Karen forces and greater autonomy in the Karen State.

“We may need a neutral third party when it comes to discussing the political and development issues in the Karen State,” Sein told IPS. “We are for a federal system with greater rights for ethnic groups, so they can live and participate in a meaningful way.”

Win Min, a Myanmar national security expert, does not believe Aung Min’s is a strategy ironed out by insiders from President Thein Sein’s reformist administration, such as the former major general who specialised as an intelligence operative; rather, he is of the opinion that the new approach stems from Aung Min’s relative inexperience and the fact that he was thrust into a role for which he had no training.

As a result, the latter is operating through a model that reflects “a hint of Burmese pride,” Win Min told IPS.

“Aung Min was stepping into uncharted waters when he was given the role of peace negotiator,” he said. “He had to find his way with each of the ceasefire talks. It was unscripted, with no foreign third party to give directions.”

And the further he went down this road “the more confidence he gained”, according to Win Min. “His modest and friendly personality, and a willingness to listen and accommodate different views, also (lubricated) the process.”

Win Min pointed to a streak of honour that still prevails in the Southeast Asian nation gradually emerging from 50 years of military dictatorships.

“Burmese have that sense of pride that we do not want to be subject to international pressure; to say we can do things ourselves,” said the Harvard-trained academic.

Myanmar Egress, a prominent local NGO, bolstered this attitude when it stepped in to help establish contact between the government and its adversaries from the ethnic minorities.

The move also enabled the Thein Sein administration to turn down offers made by many respected international personalities and organisations to shoulder the role of neutral peace facilitators, including former Finnish President Ahtisaari and The Elders, an independent group of global leaders led by South African Archbishop Desmond Tutu.

This streak of national pride does not, however, extend to the economic realm. Myanmar has accepted economic support to strengthen its fledgling peace process from the Peace Donor Support Group (PDSG), led by Norway and supported by Australia, the European Union, Britain and the World Bank, all of which have pledged to pour millions of dollars into relief and rehabilitation work in areas where the guns have fallen silent following the ceasefire talks.

That the ceasefire agreements have held so far reflects a shift in thinking from previous regimes’ attempts to end conflicts with ethnic separatists.

“The position the government is taking in relation to the ethnic groups is one of equality,” Paul Keenan, research coordinator at the Burma Centre for Ethnic Studies, based in the northern Thai town of Chiang Mai, told IPS.

“Previously, the government dictated terms to the armed groups and they had to give up their weapons before talks, because security was the priority, not peace and equality,” he added. “But the atmosphere is completely different now. And Aung Min wants to talk to everyone, which is new.”