BANGKOK, May 28 2013 (IPS) - It was another Monday afternoon in the remote Thai village of Baan Dong when an incoming text message lit up the black, dust-covered Nokia phone belonging to Eiem Sompeng. 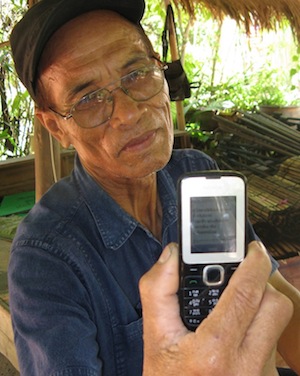 The brief, 18-word message alerted the 68-year-old farmer to unexpected showers across parts of Yasorthorn, one of the poorest provinces in Thailand’s northeastern rice bowl, including his own village of 190 families.

Accustomed by now to these weekly alerts, part of a scheme initiated by the Community Weather Forecast Centre (CWFC) to help farmers cope with climate change, Eiem says the messages “have helped us farmers prepare our fields”, echoing the sentiments of roughly 10,000 other farmers benefiting from this new flow of information.

With the annual monsoon rains expected in June, farmers in this community that grows Thailand’s famous jasmine rice are becoming increasingly dependent on their mobile phones for regular and precise weather updates, which they use when preparing the fields for another harvest of the long, fragrant white grain.

Until now, a joint effort by Thailand’s meteorological department and a private mobile phone operator had served to supply weather forecasts to vulnerable farmers. These daily updates had provided broad estimates, such as rainfall percentages for an entire province.

But farmers like Eiem found little use for such information, since it was “too general, when we need specific details.”

“In some provinces like Yasothorn there were no forecasts at all and the farmers had to rely on the forecasts for nearby provinces like Ubon Ratchathani,” Kasina Limsamamphun, programme coordinator for the British-based charity Oxfam, told IPS.

Little wonder, then, that the CWFC has earned thousands of farmers’ praise and gratitude for connecting agrarian communities to a network fed by the Bangkok-based Geo-Informatics and Space Technology Development Agency that uses satellite-supplied information to make very specific predictions.

After two years of trials CWFC has succeeded in providing forecasts particular to small geographic areas, which have helped to reduce losses and damages caused by extreme weather on the farms.

Just last year, for instance, over 1,600 jasmine rice farmers in one part of Yasothorn reported that rice yields dropped by 15 percent from the previous year due to a lengthy dry spell.

“Micro-level weather information is what farmers prefer at a time of erratic rain and drought conditions,” says Suwanasart Konbua, head of the Climate Change Knowledge Management Centre, an affiliate of the CWFC. “Many of the farmers are still struggling to cope with the way the weather keeps changing, destroying crops and harvests.”

The nod towards technology also stems from the fact that unpredictable weather patterns have rendered traditional forecasts unreliable.

One such example is the annual fireworks festival, ‘Bang Fai’, where rockets are fired into the sky at rural fairs throughout the month May, signaling the end of the dry season. According to custom, the rockets are meant to appease the local gods, whose blessings will precipitate heavy monsoon showers.

But farmers can no longer depend on the magic of deities. Severe droughts and unusual storms have come to characterise this region known locally as the ‘Crying Plain’, where unique soil conditions in eight provinces are responsible for producing 80 percent of Thailand’s world famous staple, demand for which is matched only by India’s basmati.

The first hints of the fluctuations that would come to plague jasmine rice farmers in Yasothorn emerged eight years ago, according to Oxfam’s Kasina.

“It became a serious issue five years ago, when they (farmers) perceived a rice yield reduction of 30 to 50 percent.”

According to the Earth Net Foundation, a local grassroots campaigner, some years have seen prolonged dry spells during the early months of the growing season – usually beginning in June – and then heavy rainfall at harvest time, resulting in broken grains.

Thus farmers like Eiem, who earn about 300 dollars a month at the best of times, are entirely dependent on the monsoon rains in order to plough their fields and earn money from a crop that has made Thailand one of the world’s leading rice exporters.

Experts attribute the drop to a rice-pledging scheme introduced by the government of Prime Minister Yingluck Shinawatra, which made a promise during the 2011 general elections to buy the grain from farmers at 665 dollars per tonne, roughly 40 percent above the market rate.

But the unprecedented windfall for the rural economy will not go far if the government fails to heed warnings by the Food and Agriculture Organisation (FAO): according to a 2012 report by the United Nation’s food agency, rice farmers in Thailand’s northeast should brace for more weather extremes, given that they fall within the Southeast Asian terrain forecast to be seriously affected by the adverse impacts of climate change.

“It is estimated that 50 percent of the world’s rice production is affected to a greater or lesser extent by drought,” the report added.