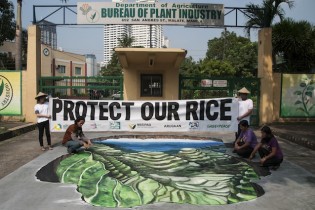 Fighting Drought, One Pond at a Time

By Naimul Haq
Bangladesh, a country of 150 million people who depend on rice as their main staple, is gearing up for drought. Already huge areas of the rice-producing regions are on a knife's edge, as elusive rains and hotter temperatures team up on thirsty paddy fields and threaten to disrupt food supply.