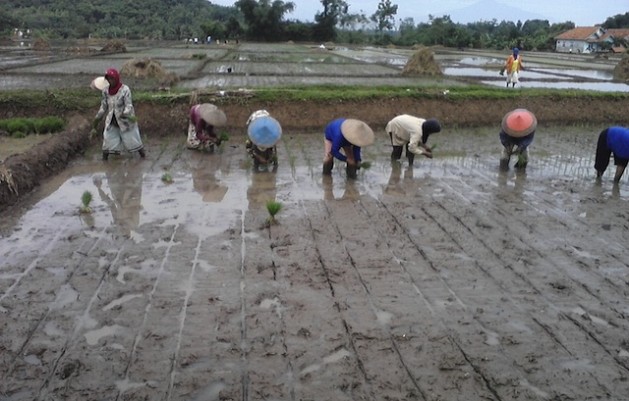 JAKARTA, Mar 29 2013 (IPS) - Last October, at the beginning of Indonesia’s rainy season, a 37-year-old farmer named Herinurdin took a leap of faith. Instead of planting corn in his entire 1.3-hectare rainfed farm in the Sukabumi town of West Java, as his family had done for generations, he sowed 1,600 square metres worth of rice instead.

In November he ploughed another 700 square metres and by December he had seeded the remainder of his land in this densely populated province, some 120 kilometres south of the capital Jakarta.

“The rice (planted in December) is now flowering,” Herinurdin told IPS. “I harvested 750 kilogrammes of unhusked rice from that 1,600 square metres.”

Until last year, he had always used the farm for corn or peanut “because I did not know that rice could grow in the rainfed field”.

Herinurdin is one of the earliest beneficiaries of a government programme launched last year aimed at easing the impacts of climate change on the roughly 41.2 million farmers spread across this archipelago.

The calendar indicated that Java Island and the western Lampung province, as well as South Sulawesi in central Indonesia are prone to pest attacks in the first dry planting season that runs from March to May 2013, while regions like Sumatra and North and South Sulawesi are at risk of floods.

Western Sumatra, the north coast of Java, and East Nusa Tenggara, on the other hand, are likely to experience prolonged drought.

Agriculture plays an important role in Indonesia’s economy, with around 18 million farmer households and five million peasants dependent on the sector for livelihood, according to the state Central Statistics Agency (BPS).

“The planting calendar is designed to deal with adverse impacts of climate change, particularly changes in rain patterns that directly affect the planting season,” Eleonora Runtunuwu, a researcher with IAARD, told IPS.

It also contains information about suitable planting weeks for each of Indonesia’s 6,501 districts in 33 provinces; crops and seed varieties appropriate for certain planting seasons; fertilisers required for recommended crops; and potential scourges such as pest attacks.

In drawing up the calendar, the IAARD, which falls under the Ministry of Agriculture, takes into account weather forecasts issued by Indonesia’s Meteorology, Climatology, and Geophysics Agency (BKMG), the agriculture ministry’s Automatic Weather Station, and the Predictive Ocean Atmosphere Model of Australia.

The agency divides the year into three planting periods: the rainy season that runs from October to February; the first dry season from March to May; and finally, the second dry season from June to September. The calendars are issued in August, February, and May respectively.

Besides publishing the calendar online, the ministry has dispatched tens of thousands of field experts to advise farmers on what crops to plant, how to take care of them and when to fertilise.

But results have so far been patchy, and the iniative has illicted harsh reviews across the country.

Nandang Sunandar, head of the West Java Agricultural Research and Development Agency (BPTP), praised the planting calendar but lamented the fact that the government cannot force farmers to follow the guidelines.

“The calendar only gives recommendations to farmers on crops, seeds, and fertiliser. Farmers have the final say; they may or may not follow (our) advice,” Nandang told IPS from Bandung, the provincial capital of West Java.

Others, like Tejo Wahyu Jatmiko, coordinator of the Alliance for Prosperous Villages, charge that the calendar has not been communicated adequately to farmers.

“The more detailed the weather information is, the better for farmers and the calendar is doing just that – however, farmers have little knowledge about the calendar, forcing them to stick to traditional schedules that result in crop failures due to prolonged drought or excessive rains,” he said.

The Jury Is Still Out

IAARD’s Runtunuwu believes it is too early to declare the system a failure.

“The calendar was only launched officially last year and has covered just four planting seasons, so it is normal (to experience hold-ups) here and there,” she told IPS at her office in Bogor, 40 kilometres south of Jakarta.

“We received feedback from users in the regions that we have to improve the accuracy of some information, including fertiliser recommendation, the start of the planting period, and seed variety.

“The ministry of agriculture has established task forces in 33 provinces to help improve the accuracy of information in the calendar and simultaneously monitor, verify, and do field validation throughout the country,” Runtunuwu added.

Experts say the stakes involved in the initiative are very high. National Food Security Council Secretary Achmad Suryana was quoted in November 2012 as saying that at least 36 million people are vulnerable to a food crisis. In January BPS reported in September 2012 that the number of poor people – those living on less than 26 dollars a month -- stood at 28.59 million people, or 11.8 percent of the country’s population.

Forty-one-year-old Yaiz Hery Astono, a farmer from the Yogyakarta province, says the planting calendar fails to take into account the behaviour of the entire ecosystem.

“Most farmers here are following our traditional planting calendar, which we believe to be more reliable for our area,” said Astono. Known locally as ‘pranta mangsa’ this calendar takes its cues from animal behaviours, plants, the sun’s position, and ancient wisdom on astronomy.

“Our calendar takes into account not only the beginning or end of the rainy season and rain intensity, but also cycles of pest and rat attacks based on our experiences,” he told IPS, adding that some farmers who follow the government’s calendar have often experienced crop failures due to unanticipated pest attacks.

Experts who believe farmers themselves should have been consulted in the development of the calendar say that traditional wisdom is being lost.

“Farmers should be involved in designing food-related programmes because they have knowledge of the local environment,” Said Abdullah, manager of the People’s Coalition Network for Food Security, told IPS.

Another hurdle to full implementation of the planting calendar is a shortage of seed.

“Often farmers simply cannot find seeds recommended by the calendar, prompting them to use any seed available in the market and completely ignoring our advice,” Nandang said.

According to Abdullah, few farmers can afford to buy the subsidised fertiliser and seeds recommended by the calendar. “In the end, they borrow money from loan sharks,” he said, which pushes prices even higher.

Though the government has assigned state-owned enterprises to distribute seeds and fertiliser throughout the country, the combination of poor coordination and extreme weather results in late deliveries, causing farmers to miss crucial planting dates.

“All seeds and fertilisers are imported from Java. When the sea is too rough for cargo ships to sail, we have no access to recommended seeds, (leaving) us with no choice but to use any low-quality seeds available,” said Adrianus Asia Sidot, a farmer from the Landak regency, a major rice-producing area in West Kalimantan.

Nandang also said that a dearth of field officials to explain the planting calendar and assist farmers in the lead-up to the harvesting period also slows down effective implentation.