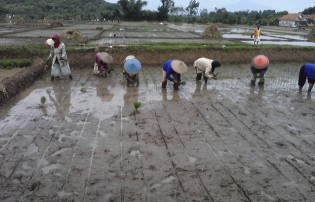 By Kanis Dursin
In West Jakarta, Indonesia, teachers at the private Santo Kristoforus High School are so environmentally conscious they make other schools seem a little bit green when it comes to environmental education.

By Kanis Dursin
The South Asian nation of Indonesia is the world’s fifth-largest emitter of greenhouses gases (GHG) and is ranked as the world’s second-largest plastic polluter of oceans, just behind China. So when the country committed in the Paris Agreement to limit the rise in average global temperatures to below 2°C by unconditionally reducing its emissions by 29 percent with using its own finances and by 41 percent with international funding, many felt the goals too ambitious.

By Kanis Dursin
At the age of 82, former Indonesian political detainee Mudjayin wonders if he will ever see justice served.

By Kanis Dursin
Misradi, a 58-year-old farmer from the Jelok neighborhood in Pacitan, East Java, some 524 kilometres east of Jakarta, has found a way to reduce his monthly expenses by 30 percent: instead of buying produce from the local market, he and his family now harvest most of their vegetables from their own yard.

Indonesia Galvanises Youth Ahead of Rio+20

By Kanis Dursin
Clutching a plastic bag containing a tree sapling in his right hand and a slim notebook in his left, 11-year-old Rizki Fauzi is the picture of a young climate change expert.

By Kanis Dursin
Dreams of sending his children to quality schools have vanished for 40-year-old farmer Muslikin, as the father of three now struggles to repay the bank loan he took out to finance his jatropha plantation in 2006.

By Kanis Dursin
Amid increasing reports of physical abuses resulting in deaths in youth detention and correctional centres across the country, an Indonesian state commission has embarked on a national campaign to scrap detention and imprisonment of children altogether.
ADVERTISEMENT ADVERTISEMENT

Volunteerism in the Decade of Action