Despite having a law and various tasks forces to combat human trafficking, Indonesia is still grappling with the crime that likely sees tens of thousands of people turned into modern day slaves. 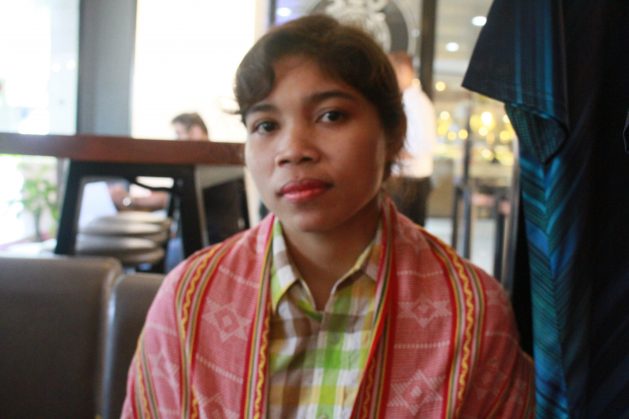 JAKARTA, Mar 4 2020 (IPS) - When her uncle offered her an opportunity to work in Jakarta almost a decade ago, the then 15-year-old Afra Burga Ambui immediately agreed and soon she was boarding a two-hour flight to the country’s capital and away from her village on Flores Island in East Nusa Tenggara, southern Indonesia.

Soon she will likely testify in a case of assault against the man who kept her as virtual prisoner for almost eight years. It was only last October, after he had beat her so severely that it resulted a head injury, that she was finally able to speak out and seek help.

“I want him to be given a very long jail sentence. He locked me up like a prisoner for over eight years, he has to experience what I have gone through,” Ambui told IPS.

Shortly after arriving in Jakarta in November 2010, Ambui was hired as a live-in maid by the businessman. He had agreed to pay her a monthly salary of $44, which was roughly half the city’s minimum wage at the time.

“My employer promised to increase my salary by $3.8 every six months but he never paid my salary. As a live-in maid, I also worked long hours without a day off,” Ambui told IPS before a court hearing in western Jakarta.

Seven months into her job, her employer began beating her with sharp objects, plastic pipes, and sometimes even broom handles.

A family in mourning

“I could not tell my condition to family members or friends because I was not allowed to have a cellular phone. Also I could not run away as the doors were always locked. Even when he asked me to buy something from the nearby grocery stores, he would watch me from the gate,” she said.

Meanwhile, at home on Flores Island, her family had already performed her funeral rites and were mourning her death. Her uncle, who had recruited her, had told them that he and the labour agency had lost touch with Ambui.

And her family had decided not to report her missing to the police because they “didn’t want to destroy family relations,” with the uncle who had recruited her, Ambui explained.

But even though Indonesia has the 2007 Eradication of the Criminal Act of Trafficking in Persons law, which imposes imprisonment of between three to 15 years and a fine between $8,440 and $42,216, Ambui’s former employer is only standing trail for assault under a domestic violence act that carries a sentence of up to 10 years.

When asked why he had not been charged under the anti-trafficking law, lawyers prosecuting the case told IPS it was the best they could do.

Santi Arief, a 27-year-old migrant domestic worker from West Sumatra, Indonesia, left for Malaysia in January 2019 with a contract, which, among other things, stated that she would receive a salary of $288 per month. She was also to receive overtime pay for work done outside of work hours and one day a week off. However, her employer wanted to pay her only $234, with no overtime or days off.

Upon her arrival in Malaysia, Arief said she was “locked up in a room, while my boss searched my belongings and confiscated all related documents [her work contract, work permit, visa and passport] and my cellular phone”.

“I insisted that he honour the signed contract but because of that he decided not to pay my salary altogether. I was also made to work long hours and without a day off,” she told IPS.

Towards the end of last year she escaped and sought protection at the Indonesian Embassy in Kuala Lumpur, but her employer had falsely reported her as an irregular migrant to immigration authorities and she was later arrested.

She was detained in prison for several months, living in “unbearable” conditions and also being verbally assaulted by the guards. Eventually someone forced her to sign some documents, which Arief now believes were papers to withdraw the complaint against her employer.

She was sent back to Indonesia soon after.

The government has no official record of human trafficking cases here. According to the national police, a total of 2,400 cases were investigated and brought to court over from 2013 to 2018.

“We believe those 2,400 cases are just the tip of the iceberg of trafficking in Indonesia,” Destri Handayani, Deputy Assistant for Women Right’s at the  Ministry of Women’s Empowerment and Child Protection, told IPS.

“Many victims don’t want to report to the police because it involves their own family members, close relatives, or in some cases well-connected public figures,” Handayani said.

In some cases, active or retired military/police officers are taught to own or have a connection with many of the so-called labour agencies here.

Endemic corruption and a human trafficking law that is not implemented

The 2018 Trafficking in Persons Report, by the United States Embassy in Jakarta praised efforts taken by Indonesia to stem human exploitation but noted the country “does not fully meet the minimum standard for the elimination of trafficking”. It paid attention to the fact that “endemic corruption among officials remained, which impeded anti-trafficking efforts and enabled many traffickers to operate with impunity”.

But not all law enforcement agencies are charging accused criminals with the human trafficking law. In late January, Jakarta police arrested six people for luring 10 teenage girls into prostitution. The girls were reportedly forced to serve at least 10 customers per night or face a fine if they refused, prompting the National Commission on Child Protection (KPAI) to call for harsher punishment for traffickers.

“Those children were recruited and sold both off and online by recruiters,” KPAI commissioner Ai Maryati Shalihah told IPS. “The perpetrators should be punished severely under the anti-trafficking law, not the child protection law, to deter anyone considering exploiting children.”

But Indonesia still remains a transit country, particularly for refugees and asylum seekers from the Middle East, Afghanistan, Pakistan and East Africa, who are looking to for a better life in Australia or other countries.

In 2017, Indonesia ratified the ASEAN Convention Against Trafficking in Person Especially Women and Children and enacted a national law designed to protect its workers overseas.

But, according to Handayani, high demand for Indonesian workers and the involvement of human trafficking syndicates have undermined the country’s efforts to combat the crime.

“Overseas demand for Indonesian workers remains high, while law enforcement has managed to prosecute small-time field recruiters only, while the funders and end-users remain free to operate,” Handayani said.

At least 4.5 million Indonesians are working in Asia and the Middle East and around 1.9 million of them are undocumented, making them vulnerable to trafficking. A majority of these workers are in domestic service, or work in factories, in the construction industry, on palm oil plantations in Malaysia, and aboard fishing vessels in the Indian and Pacific Oceans.

The Global Sustainability Network ( GSN ), which actively supports the U.N. Sustainable Development Goal 8 of decent work and economic growth, has focused much of its work on eliminating modern slavery.  It has been focusing efforts on creating a global movement of change and a list of recommendations aimed at employers, it states, among other things, that there should be; no withholding of passports and IDs, wages should be directly paid into employees’ bank accounts, their living conditions must be safe and they must be guaranteed freedom of movement.

Emi Sahertian, a church leader and activist in Kupang, the capital of East Nusa Tenggara province, said that while Jakarta’s anti-trafficking programmes were good, they did not address economic poverty as a root cause.

According to a World Bank report, around 9.4 percent of the country’s 264 million people still live below the poverty line in 2019.

“People risk their lives by entering a country illegally because they have no stable income at home. The government should direct its efforts towards creating new jobs,” Sahertian told IPS from Kupang.