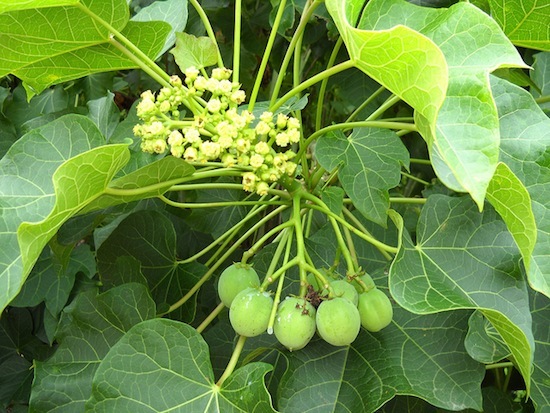 An estimated 400 million jatropha saplings and seedlings were planted across Indonesia in a biofuel drive between 2005-2008. Credit: Manipadma Jena/IPS

JAKARTA , Apr 16 2012 (IPS) - Dreams of sending his children to quality schools have vanished for 40-year-old farmer Muslikin, as the father of three now struggles to repay the bank loan he took out to finance his jatropha plantation in 2006.

“Much as I would like to send my children to quality schools, I still have debts to pay,” said Muslikin, a resident of Gundi village, Godong district, Grobogan regency in Central Java, an hour’s flight east of Indonesia’s capital Jakarta.

Back in 2006, when jatropha was being widely promoted by the agro-industry as one of the best options for future biodiesel production, Muslikin converted his two-hectare paddy field into a jatropha plantation and took out a bank loan worth about 3,000 dollars to buy saplings and fertiliser.

Less than two years later and before he was able to repay his debt in full, Muslikin cut down all of the trees and turned the land back into a paddy field.

“Jatropha was touted as a new road to economic prosperity, but it turned out to be a bust,” said Muslikin, adding that companies promised to buy jatropha fruits between 67-78 cents per kilogramme and to employ farmers with two or more hectares of jatropha plants.

Indonesia’s foray into biofuel production also attracted foreign biofuel producers. In 2007, D1 Oils signed an agreement with Lampung farmers, represented by the Association of Indonesian Jatropha Curcas Farmers, under which the British biofuel company would buy at market price all jatropha fruits from local farmers. D1 Oils also agreed to provide farmers with seedlings or saplings by paying, upon verification, 3 cents for every jatropha tree they planted.

However, the contract came to an abrupt end in 2009 when D1 Oils pulled out of Lampung. No reason was given on D1 Oils’s withdrawal, but according to Hadisunyoto, it was partly due to soaring prices of jatropha fruits.

He also said that only 10 million of 40 million jatropha trees farmers planted in the province had been verified and compensated for by D1 Oils as stipulated in the contract.

"It means for saplings or seedlings alone, Lampung farmers have suffered financial losses worth around one million dollars. That is a lot of money for farmers," he said. D1 Oils could not be reached for comment.


“None of these promises were fulfilled, with investors offering to pay between 11-17 cents only for a kilogramme of jatropha beans,” said Muslikin.

Depending on the type of seedling and soil, one hectare of jatropha can produce up to 3000 kilogrammes of jatropha beans annually so that, with a price of 67 cents per kilogramme, Muslikin would have earned 4,000 dollars annually, compared to the 2,778 dollars he earns per year cultivating rice.

Muslikin was one of tens of thousands, or perhaps hundreds of thousands, of farmers who heeded government appeals to plant jatropha curcas as Indonesia – an oil-producing country that has now become a net oil importer – sought to reduce dependence on fossil fuel, whose price has been rising steadily since 2005.

In 2006, President Susilo Bambang Yudhoyono set an ambitious target of increasing renewable energy use to account for 17 percent of total national consumption and reducing fossil fuel use from its current 55 percent to around 20 percent by 2025.

The President established the National Biofuel Development Team tasked with formulating the country’s biofuel development blueprint and drafting biofuel production programmes to be carried out by related government institutions.

These programmes sent farmers around the archipelago rushing to plant jatropha, a drought- and pest-resistant tree that produces seeds containing an average of 34.4 percent oil, one of the highest among biofuel crops.

“The number of farmers planting jatropha curcas is difficult to know, but we estimate that around 400 million jatropha saplings and seedlings were planted across the country from 2005-2008,” said Abbas Hadisunyoto, chairman of the Association of Indonesian Jatropha Curcas Farmers.

“In Lampung province alone (on Sumatera Island), farmers planted around 40 million jatropha saplings and seedlings among oil palm and rubber trees,” said Hadisunyoto, who once served as a member of the Lampung Provincial Legislative Council (DPRD).

Aside from Lampung, jatropha trees were widely planted in Central Java, West Java, East Java, West Nusa Tenggara, and East Nusa Tenggara provinces. Authorities say Indonesia has around 50 million hectares of “neglected” land that could be developed into jatropha plantations.

Sowing the seeds of crisis

Waterland’s operations, however, have come under the fire from activists with Friends of the Earth Netherlands, who allege that Waterland’s jatropha plantations on Java, particularly in Central Java, were exploiting local poor and uneducated farmers and compromising their food security.

“Jatropha cultivation on Java leads to the exploitation of farmers and comes at the cost of food production for the local population,” the non-governmental organisation said in a report entitled ‘Biokerosene: take-off in the wrong direction’ released in February.

Arief Zayin, co-author of the report, said the country’s biofuel campaign could trigger land and food crises as many farmers converted agricultural lands into jatropha plantations.

“Lands that were previously cultivated as agricultural lands are now planted with jatropha,” said Arief, who is also director of the Indonesian Forum for the Environment (Walhi) Central Java.

Waterland called the report misleading and claimed it was written to justify the Friends of the Earth Netherlands’ fight against biofuel, particularly bio-jet fuel.

“What Friends of the Earth does not meantion is that we are not operating on agricultural lands but on government forest designated as reforestration areas where agricultural farming is limited or strictly bound by rules,” a company spokesperson told IPS.

It also said that its plantations were located on hilly lands and thus the jatropha trees have effectively prevented “soil erosion” and reduced “the risks of landslides.”

The company said that they pay 14 cents per kilogramme of jatropha fruits, including the seeds, husks, and fruit cells. “We use those waste by-products to produce biofertiliser,” the company said.

Still, the jatropha rush proved to be short-lived. By late 2008, the biofuel campaign had lost its steam, with farmers cutting down their plants due to low selling prices of jatropha fruits.

“Between 80 to 85 percent of 400 million saplings and seedlings planted from 2005 to 2008 have been uprooted, not merely cut down,” said Hadisunyoto.

According to Al Hilal Hamdi, former chairman of the National Biofuel Development Team, the country’s jatropha-for-biofuel programme was practically non-existent.

“The programme has almost come to a complete halt, with activities limited to seed research and development, as well as small initiatives by some NGOs,” said Hamdi.

Hamdi said given the size of land that can be converted into jatropha plantation, the commodity promises huge potentials.

“However, the government has to help farmers with quality seedlings, price incentives, and production facilities,” he said, adding that it should also hire people who can teach farmers how to cultivate the plant properly.

Hadisunyoto said interest in Indonesia’s jatropha has returned, with some companies from Germany, Singapore, Malaysia, Japan, and South Korea making inquiries with his organisation.

“We are discussing some cooperations with companies from those countries and now I am going around telling farmers to cultivate jatropha again,” Hadisunyoto said.

But Muslikin swears he will not give jatropha a second chance. “Jatropha is history for me. I am not stupid as a donkey that can fall into the same trap,” he said.