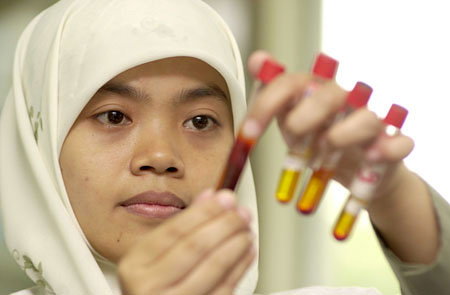 A lab technician at the Disease Investigation Centre near Yogyakarta, Indonesia checks for the avian flu virus in samples taken from poultry. Credit: FAO

JAKARTA, Indonesia, Jul 10 2017 (IPS) - Poultry farmer Bambang Sutrisno Setiawan had long heard about biosecurity but never gave serious thought to it, even when the highly pathogenic avian influenza H5N1 forced him to cull thousands of his layer chickens in 2003 and 2009.

Eighteen years into the business, however, Bambang, who is called Ilung by friends, is now converting his second farm into a three-zone biosecurity poultry with a strong conviction that it is the only way to save his business amid continued threats of bird flu and other animal diseases.

Indonesia detected its first bird flu case in 2003. Since then, the H5N1 virus has killed millions of poultry in 32 of the country’s 34 provinces.

“My second poultry biosecurity will soon operate, hopefully in July,” Ilung told IPS by phone from Semarang, Central Java, a one-hour flight east of the capital Jakarta, in mid-June.

The 44-year-old has two poultry farms, each accommodating around 30,000 layers, and one day-old chick site that can hold 10,000 chicks.

Ilung converted one of his farms into biosecurity poultry in November 2015 after attending seminars and trainings organized by local Livestock and Animal Health Services and Food and Agriculture Organization’s Emergency Center for Transboundary Animal Diseases (ECTAD).

Three-zone biosecurity is one of programs ECTAD Indonesia is promoting to contain the highly pathogenic avian influenza (HPAI) that continues to plague the country of 250 million people since its first detection in 2003.

The model divides a farm into three separate areas: a red zone for high disease risk external areas, yellow zone for medium risk service areas, and green zone for clean and highly secure access-restricted area where the chicken flock is located. Access from the red zone to the yellow zone requires showering and a complete change of clothing and footwear, while further inward access to the green zone requires a second change of footwear to maintain biosecurity standards.

According to Ilung, biosecurity keeps animal diseases out and cuts disinfectant and medicine costs by 30 percent and 40 percent, respectively.

“Production also rises to 60 kilograms per 1,000 layers now, compare to 50 kilograms previously, and more importantly, I have not had disease outbreaks since November 2015,” said Ilung.

In 2009, Ilung culled half of his layer chickens after bird flu struck his farms for the second time. Prior to that, the father of two was forced to prematurely sell 11,000 chickens to cut losses after 300 layers were found to have died of H5N1 in 2003. He has been in the poultry business since 1999.

Robby Susanto, a 62-year-old poultry farmer in Solo, Central Jaw said biosecurity has proven to bring a lot of benefits to poultry farmers like him.

“Our net profit has increased by between 11 percent and 35 percent since practicing biosecurity poultry,” he told IPS by phone from Solo, an 80-minute flight east of Jakarta.

Susanto started his poultry farming in 2010 after participating in ECTAD’s biosecurity pilot projects together with five other farmers.

“Biosecurity keeps avian influenza and other animal diseases out of his 100,000 layer chickens and help maintain production of five tons of eggs per day,” he said.

A study by ECTAD Indonesia shows that for every cent spent on three-zone biosecurity, poultry farmers gain as much as 12 cents in profit.

Ilung said he spent around 5,000 dollars for each biosecurity farm.

Indonesia has been listed as one of the global hotspots for human H5N1 avian influenza infections since 2005, prompting ECTAD to open an office in the country in 2006. 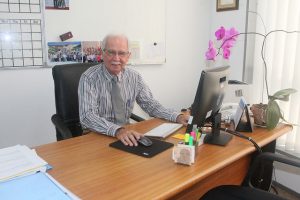 “Since 2005, Indonesia has been one of the global epicenters for human H5N1 avian influenza infections with more human cases and fatalities than any other country until 2014,” James McGrane, ECTAD Indonesia Team Leader, told IPS in an interview in Jakarta.

Indonesia detected its first bird flu case in 2003. Since then, the H5N1 virus has killed millions of poultry in 32 of the country’s 34 provinces, disrupting the livelihoods of large numbers of people dependent on poultry-keeping, according to ECTAD Indonesia.

Up until 2017, the World Health Organization has recorded 199 confirmed human cases of avian influenza in Indonesia, with 167 deaths. That figure is the highest in the world, with Egypt coming in second with 120 deaths out of 359 cases, and Vietnam third with 64 deaths of 127 cases.

Negligence on the part of poultry farmers – not wanting to follow proper security standards – has been cited as the main reason human deaths were high in Indonesia.

Aside from promoting biosecurity, ECTAD Indonesia helped the central and local governments develop and implement a community-based Participatory Disease Surveillance and Response (PDSR) system to contain HPAI in backyard poultry in 32 provinces.

By 2015, PDSR had 2,500 trained officers working in 350 districts in 30 provinces. The system, according to McGrane, was able to detect and attend to over 10,000 HPAI outbreaks over the years.

“In 2009, following an evaluation of the PDSR system, greater emphasis was placed on working with the commercial poultry sector, and a program was initiated to strengthen relations with and surveillance in the commercial industry,” said McGrane.

“We still have bird flu cases every year but their number has continued to decrease every year,” Fadjar told IPS on Tuesday, June 20, 2017.

Fadjar expressed optimism that bird flu cases would continue to fall now that Indonesia has adopted One Health approach in dealing with various human and animal diseases.

One Health recognizes that the health of humans, animals, and ecosystems are interrelated and thus any potential or existing health risk calls for collaborative efforts between health practitioners (including vets, doctors, public health officers, epidemiologists, ecologists, toxicologists) and related institutions to attain optimum health for people, animals, wildlife and the environment.

ECTAD Indonesia also helped the government establish the Influenza Virus Monitoring (IVM) Online platform to monitor circulating HPAI and other influenza viruses. According to McGrane, since its launch in 2014, the platform has seen increases, among other things, in the number of H5N1 isolates being uploaded to IVM Online, isolates that have been antigenically and genetically characterized, and improved knowledge on circulating AI viruses in Indonesia.

“Influenza virus monitoring and characterization is crucial for the development of local vaccines, effective against the circulating strains of HPAI in Indonesia,” said McGrane, adding: “The selected challenge strains are used to test the efficacy of new vaccines developed by local commercial vaccine companies.”

“ECTAD today continues to support the control of HPAI and other endemic zoonotic diseases such as rabies and anthrax, while also focusing on new or re-emerging global health threats which spill over into humans from animal populations, such as Ebola, MERS-CoV and Zika,” said McGrane.