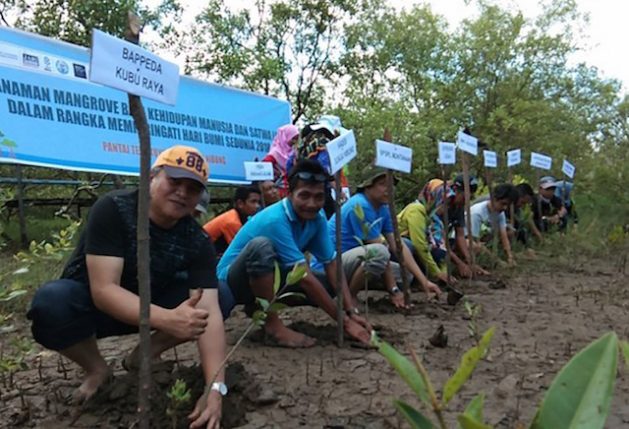 “I hauled over 12 kilograms of crabs on that day, which I sold to local traders,” Samsul told IPS during a phone interview from Sungai Nibung, a fishing village inside a protected mangrove forest in Kubu Raya regency, in the West Kalimantan province on Borneo Island. The island is a 90-minute flight north of the country’s capital Jakarta.

But that was some time ago.

Decades of overfishing and rampant use of fish bombs, poison, and trawls, combined with the rapid conversion of land into oil palm plantations in neighbouring villages, had severely depleted crab, shrimp and fish stocks in the area, resulting in dwindling catch and declining incomes for local residents.

To help make ends meet, Sungai Nibung residents would cut down mangrove trees to sell as firewood, often playing cat and mouse with law enforcers as the mangrove forests were protected areas.

But in 2017, the Ministry of Environment and Forestry in Jakarta set aside 3,058 hectares of mangrove forest for the community to manage under a village forest scheme. Village residents were allowed to cultivate the mangrove forest to improve their economic circumstances but were not allowed to cut down mangrove trees.

Since then many fisherfolk like Samsul not only continue to have an income, but some have even doubled theirs.

Muhammad Tahir, 47, another Sungai Nibung resident and a colleague of Samsul, also had a similar story.

“My income was uncertain before but now I get an average of $242 gross per month. With that income, I was able to send my second child to study at a university in [the provincial capital] Pontianak and my youngest to a junior high school. On top of that, we can also now save around $6 monthly,” the father of four told IPS. 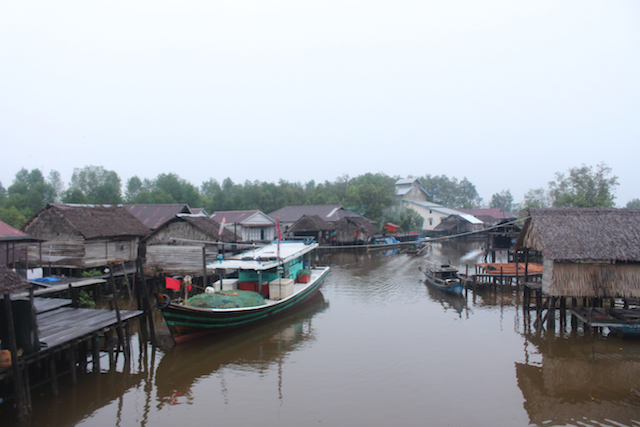 Dividing the mangroves for profit

Syarif Ibrahim has been the head of Sungai Nibung village since 2005. He told IPS that the village residents decided to divide the community forest, locally known as hutan desa, into zones for development, conservation, and sustainable agriculture.

“The development zone covers an area of some 1,800 hectares and is designated as fishing grounds, with 400 to 600 hectares of conservation area dedicated to mangrove research and education activities. The sustainable agriculture zone has some 600 hectares for dry-land paddy field and horticulture plants,” Ibrahim said.

“We also agreed that rivers and tributaries in the development zone are closed for fishing for three consecutive months at different times of the year to allow crabs, fish and shrimps to breed and replenish the stock,” Ibrahim said.

Riansyah, a Planet Indonesia Foundation activist who assisted villagers in the area with understanding sustainable fishery, said the first closures ran from August to October 2017, involving five rivers and tributaries.

“Since then, 11 of the village’s 21 rivers and tributaries have been closed and opened alternately for fishing at different times of the year. Each closure lasts for three months,” said Riansyah, adding that five rivers and tributaries were scheduled to be closed in the next round of closures from March 22 to June 22 this year.

During the closures, two fisherfolk are assigned daily to patrol the rivers and tributaries to ensure no one violates the agreement, Riansyah told IPS.

Entering its third year, the open-closed fishing system has proven to improve local people’s economic condition as reflected in both Samsul’s and Tahir’s experiences.

But more importantly, Sungai Nibung residents have learned to save the mangrove forests from destruction. In the conservation zone, for example, fishing is strictly prohibited except in designated areas. Local residents, including fishers, have also learned about the important role mangroves play for coastal ecosystems.

“Now fishers here know mangroves are very important for the sustainability of crab, shrimp and fish in the village and have agreed to stop using fish bombs, poison, and trawls,” Ibrahim told IPS.

According to the Food Sustainability Index, created by the Barilla Centre for Food and Nutrition and the Economist Intelligence Unit (EIU), Indonesia has a score of 61.1 out of 100 when it comes to sustainable agriculture, where 100 is “the highest sustainability and greatest progress towards meeting environmental, societal and economic Key Performance Indicators”. This is just below the average of 65 of other middle income countries.

Saving the mangroves for climate mitigation and sustainable food supply

But aside from the conservation and ensuring that fish stocks are allowed to replenish before fishing, residents have also participated in various mangrove campaigns, planting over 32 hectares of the village forest with mangrove trees since 2017, according to Riansyah.

West Kalimantan, with around 100,000 hectares of mangroves, is home to 75 percent of Indonesia’s mangrove species. Aside from Kubu Raya, mangrove forests are also found in other areas such as Ketapang, Kayong Utara, Mempawah, Sambas and in Singkawang municipality.

According to an international paper, mangroves capture four times more carbon than rainforests and store captured carbon in the soil beneath its trees. This ability to mitigate climate change is a key to a sustainable food system.

The FSI also notes that addressing deforestation is important for countries across the globe adding that, “climate change adaptation and mitigation strategies will be essential in creating a more sustainable food system since agricultural activities make a significant contribution to climate change, accounting for up to 30 percent of global greenhouse gas (GHG) emissions, according to some estimates.”

Asep Sugiharta, director of Essential Ecosystem Management at the ministry of environment and forestry, told IPS that Indonesia recorded 3.3 million hectares of mangrove forests in 2019, almost 23 percent of the world’s total mangrove forests. At least 252,071 hectares are found in Kalimantan, the Indonesian part of Borneo Island.

Environmental benefits aside, the open-closed fishing system has given new optimism to Samsul, particularly when it comes to the future of his two children.

“I was not able to finish my elementary education due to dire poverty. With the success of the open-closed system, I am optimistic my income will continue to grow and thus I can send my two children to higher education,” Samsul said. “More than that, I was told the system would ensure the sustainability of the coastal ecosystem for our great grandchildren.”

Meanwhile, village head Ibrahim breathed a sigh of relief that Sungai Nibung residents have bought into the idea of sustainable food production.

“The challenging part was changing people’s paradigms. The villagers were so used to fishing anywhere throughout the year in the mangrove forest, taking big and small crabs, shrimps, or fish. Now, they have started thinking about their sustainability.”