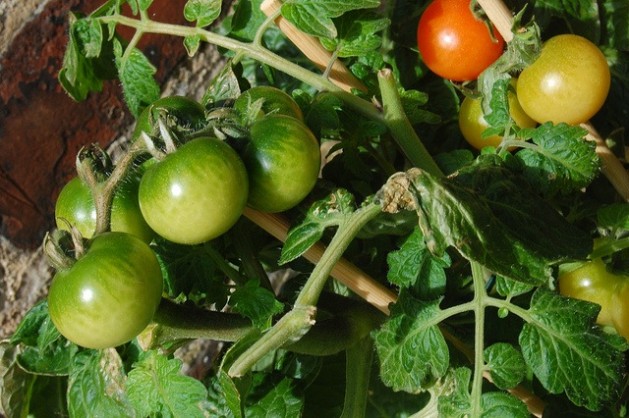 JAKARTA, May 31 2012 (IPS) - Misradi, a 58-year-old farmer from the Jelok neighborhood in Pacitan, East Java, some 524 kilometres east of Jakarta, has found a way to reduce his monthly expenses by 30 percent: instead of buying produce from the local market, he and his family now harvest most of their vegetables from their own yard.

Jelok, a neighbourhood of 126 families in Pacitan, the hometown of Indonesian President Susilo Bambang Yudhoyono, was chosen in February 2011 as the location for the pilot project of the Sustainable Food Home Area, a programme initiated by the Ministry of Agriculture aimed at mitigating impacts of climate change on the country’s food security.

Known here by its Indonesian acronym KRPL, the programme encourages all residents of participating neighbourhoods to plant medicinal herbs and alternative food crops to meet their own needs. Residents with 200-square-metre yards or larger are also encouraged to farm fish and poultry and rear animals, particularly goats.

Haryono says his agency has established 360 Sustainable Food Home Areas in regencies, or municipalities, throughout the country that serve as models for local governments to replicate.

“East Java, Central Java, West Sumatra, and Central Sulawesi provinces started replicating the programme in 2012. Other provinces are expected to follow suit in 2013,” Haryono told IPS, adding that the Ministry of Agriculture has allocated funds to establish 5,000 KRPLs in 2013 through the Food Security Agency.

Each KRPL involves between 20 to 100 families who decide what horticulture plants, herbs, or alternative food crops to cultivate based on local food resources. The government, on the other hand, provides the necessary seeds and assigns agriculture experts to advise participants on how best to cultivate their crops.

Haryono said his office also builds a village seed farm at each KRPL, in charge of determining appropriate seeds for a given area.

“Our office has made an agro-ecology map of each province and regency (municipality) and has identified local and introduction plants suitable for certain areas,” he said, adding that endangered local plants must be replanted.

Haryono warned, however, that the programme depends very much on the environmental awareness of local people and consistency on the part of local leaders, including heads of neighbourhoods, villages, districts, and regencies.

“Technically, problems encountered may include the absence of qualified advisors who guide farmers during the planting season, lack of suitable seeds or saplings, as well as extreme weather change that may affect the plants,” he said.

“The yields were plentiful, much more than we could consume on our own, so we sold the excess to vegetable vendors roaming around neighbouring villages,” the farmer said about his first harvest in May 2011.

Misradi, who lives with his wife, two children and grandchild, told IPS the programme enables him to save 16 dollars a month, almost 30 percent of his monthly income of 54 dollars.

“Other families are able to save as much as 32 dollars per month,” said Misradi, who coordinates the Jelok residents participating in the programme.

Indonesia is striving to adapt to adverse impacts of climate change. The world’s largest archipelagic country of over 13,000 islands, Indonesia is believed to be one of the most vulnerable countries to the catastrophes caused by global warming.

Already, the weather patterns are shifting, making it difficult for farmers to determine when to plant crops, while irregular drought and rainfall has caused crop failures, raising concerns about food security in the country of 242 million people.

“Climate change is putting pressure on the country’s agriculture sector as reflected in lower rice production,” said Nono Rusono, director of food and agriculture at the Ministry of National Development Planning.

The agriculture sector employs at least 43 million people and, together with forestry and fishery, contributed 13.2 percent of the country’s gross domestic product (GDP) in 2010.

Haryono, head of the Ministry of Agriculture’s Agency for Agricultural Research and Development, which is in charge of KRPL, said the programme hopes to ensure food security and food self-sufficiency for every family in the country, promote food diversification based on local resources, preserve local food resources, and enhance people’s prosperity.

“The programme is developed on the conviction that national food security builds on family food security,” Haryono said.

Encouraged by the success of pilot projects, Yudhoyono declared KRPL a national programme in February 2012 and appealed to provincial governments to make it a priority.

The government has also taken steps towards mitigation and adaption, including efforts to reduce greenhouse gas emission by 26 percent by 2020.

Witoro, chairman of the NGO People’s Coalition for Food Sovereignty, welcomed the KRPL programme but warned that its success depends on whether or not the government is willing to help market people’s products.

“When people produce the same products at the same time, there will certainly be excess and unless the government helps market the excess products the people could get disappointed and abandon the programme,” he cautioned.

Over all, according to Witoro, the current government has little, if any, political commitment to ensuring food security, let alone food sovereignty.

“The government has no clear long-term target or (vision) – no projected numbers of people and their food needs – on how to ensure food security,” he said.

“The Merauke Integrated Food and Energy Estate (MIFEE) and the Master Plan for Acceleration and Expansion Development both prioritise commodities in high demand and require huge investment – they reflect the government’s indifference to small-scale food producers,” Witoro said.

The Master Plan for Acceleration and Expansion Development, on the other hand, aims to make Indonesia one of the world’s 10 major economies by 2025 by, among other things, encouraging the private sector to play a major role in economic development, particularly in the area of infrastructure. The plan, which was launched in May 2011, also promises fiscal and non-fiscal incentives to the private sector.

According to the activist, the government’s overreliance on big corporations and imports shows a lack of political commitment to develop the country’s food security.