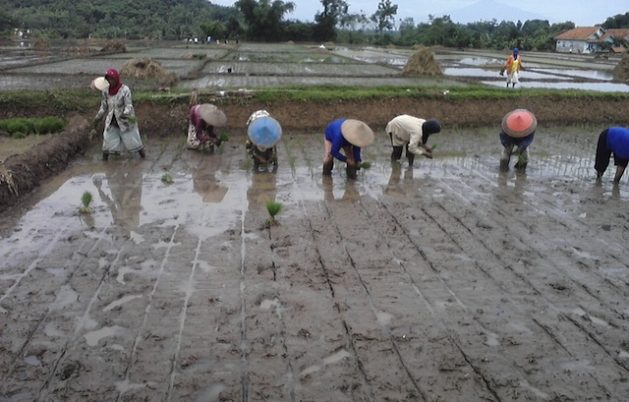 JAKARTA, Dec 10 2020 (IPS) - When his friends prodded him to use an agricultural app in July, rice farmer Mustafa reluctantly downloaded RiTx Bertani into his smart phone. Four months later, he feels happy to have given the technology a try.

“I started using the application in early September when I planted rice on 0.7 hectare of irrigated land,” the 41-year-old told IPS last month in a phone interview from Bondowoso regency in East Java, a one-hour flight east of the capital Jakarta.

“I cannot tell yet if it helps boost production or not, but I am very happy with the technology. It helped me detect and identify a rice disease in late September. We had always called rice diseases brown planthopper before and used the same medicines to control the disease. Thanks to the technology, we now know different rice diseases and can use appropriate insecticides to deal with them,” said the father of two.

Developed by start-up tech company PT Mitra Sejahtera Membangun Bangsa (MSMB), RiTx Bertani is designed to help farmers deal with climate change and other problems they may have through digital technology. RiTx comes from the words agriculture technology, while Bertani literally means farming.

Another farmer, Kurlufi, meanwhile, said he downloaded the application in 2018 but uninstalled it shortly after as he found it less helpful for his chilli crop. Earlier this year, he decided to reinstall it as the price of chilli suddenly dropped.

“The price of chilli has dropped sharply since the coronavirus hit the country in March. I looked for alternative crops when the application suggested that my field was suitable for cucumber,” the 42-year-old father of two told IPS from Banyuwangi regency, also in East Java.

The coronavirus pandemic, which has killed 18,366 people as of today (Dec.10) has forced people to work from home and plant vegetables at their backyards, driving down the price of food crops due to low demand.

Kurlufi owns 0.95 hectares of farm land. Since the COVID-19 pandemic hit the country, he has planted cucumber on 0.6 hectares of his field for two successive seasons, harvesting eight kilograms of cucumber seeds in the first season and 18 kilograms in the second. Each season last for almost three months.

“I find the technology very useful for people who have no prior or little experience in farming. In my case, it helps me decide what crops to plant and when to hire workers to do the pollination as it provides weather forecasts for the next six to seven days,” Kurlufi added.

Mustafa and Kurlufi are two of 11,000 farmers in eight provinces in Indonesia using RiTx Bertani, one of dozens of agricultural apps currently available as the government promotes Smart Farming 4.0 or digitised agriculture.

“Users have to submit detailed information about their fields, including the size, borders, latitude, and longitude for the sensors to locate. Once the sensors detect the fields, they immediately measure the soil’s moisture and air temperature and feeds those information to the internet,” Prastyo told IPS from Yogyakarta, a 50-minute flight east of Jakarta.

One sensor, which costs approximately $2,700, covers an area of 10 hectares of land.

Based on the soil’s current moisture, Prastyo said, agriculture experts at the company provide suggestions to farmers through the app on what crops suit their land best for the next planting season.

“Throughout the season, the sensors measure soil moisture and air humidity every 10 minutes and upload them into the internet. Users can read the feeds through the app under the sensor menu. Farmers need this kind of information to apply fertiliser or spray pesticides, if needed,” he continued.

The application, Prastyo said, also allows farmers to record all farming activity and save them under a record menu so they know exactly when next to apply fertiliser or spray pesticides or insecticides. Farmers can also ask for additional assistance through the online forum.

Activist Said Iqbal of non-governmental organisation People’s Coalition for Food Sovereignty welcomed the use of apps in farming but said he doubted that digitised agriculture would improve the welfare of farmers and help the country achieve food sovereignty in the immediate future.

“Digitising the agriculture sector is unavoidable now but the root of the matter is farmers find no incentive to boost production. Why? Because they control on-farm activities only, while upstream and downstream activities are controlled by big businesses. It has become a public knowledge that intermediaries or traders earn more than twice of farmers’ earnings,” he said.

He also said most farmers in Indonesia were small holders, with each owning an average of 0.2 hectares of irrigated land. “Because of that condition, many farmers choose to sell their productive land and work as cheap labour, further reducing irrigated fields, especially on Java Island,” Iqbal said.

Another activist, Tejo Wahyu Jatmiko of the Alliance for Prosperous Village, agreed with Iqbal, saying that Indonesia’s agriculture sector was facing two major issues – decreases in both the number of farmers and irrigated rice fields.

However, in terms of sustainable agriculture, Indonesia has a score of 61.1 out of 100,where 100 is the highest sustainability and greatest progress towards meeting environmental, societal and economic Key Performance Indicators. This is according to the Food Sustainability Index, developed by the Economist Intelligence Unit and the Barilla Centre for Food and Nutrition.

In a bid to increase farmers’ welfare, since 2017 President Joko “Jokowi” Widodo has promoted farmer corporation, where farmers are organised into business ventures, founded and financed by farmers themselves, with the aim of controlling both on-farm and off-farm activities in the agricultural sector.

Dr. Syahyuti, a researcher with the Indonesian Center of Socio-Economic and Agricultural Policy of the Ministry of Agriculture, said under the corporation concept, farmers are also involved in the provision of seeds, fertiliser, agricultural machines, and capital with on-farm activities, and buying, milling, and selling rice in off-farm activities.

Based on experiences in some sub-districts, Syahyuti said farmers corporations increased farmers’ income by 72 percent.

While the government is working to organise farmers into business groups, Mustafa is upbeat that digitised agriculture will help increase the number of farmers in Indonesia.

“I notice the number of people tilling land in the district has increased since [using] the RiTx Bertani [app]. Many of them are young and unexperienced. I get the impression that with the technology arming is no longer a dirty job, but a lifestyle that more and more people embrace,” Mustafa said.