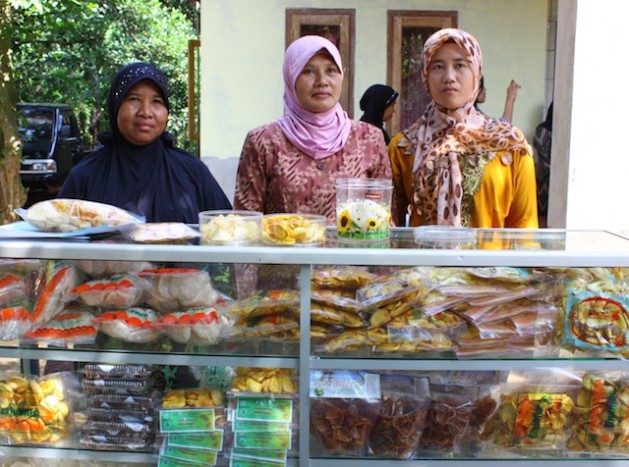 SUBANG, Indonesia, Jun 24 2013 (IPS) - When 45-year-old Kaswati joined an income-generating project in her village in Indonesia’s West Java province in 1999, all she hoped to do was supplement her family’s income at a time of erratic harvests.

But today, 14 years later, her fertiliser and jackfruit cracker businesses have far exceeded those modest plans: they have become the main sources of income for her family of four and are helping to offset the expenses of maintaining their half-hectare rice field.

Water scarcity over the past few years has forced the farming family to “draw water from faraway irrigation canals”, meaning they spend more on pumping water, and on labour, Kaswati told IPS in Pogon, a village in the Subang district of West Java province, a two-hour drive from the capital, Jakarta.

The shortage has also “limited planting opportunities to two each year instead of three, as suggested by the government,” the farmer said, adding that her compost and cracker businesses have “come to (my family’s) rescue.”

“I’ve got an outstanding order to supply 348 tonnes of compost fertiliser this year and since I cannot meet the demand all by myself, I have asked my friends to make compost and sell it to me.”

Kaswati is just one of the many women in Pogon to benefit from an income-generating project that was partially funded by the International Fund for Agricultural Development (IFAD) in order to help this Southeast Asian archipelago nation tackle the impacts of climate change on the agricultural sector.

Under the programme, which ran from 1999 to 2006, each woman was given a bank loan, worth about 40 dollars, as capital to start a business. The loan carried an interest rate of one percent and had to be repaid in 12-month installments.

When the programme ended in 2006, Kaswati and her fellow women villagers ventured into the compost business. Along the way, however, all but Kaswati abandoned the fertiliser trade. In 2008, Kaswati began a jackfruit cracker business, together with 24 other women in the village.

“The programme taught us how to start and manage a business in order to make a profit. We also learned about bookkeeping,” Kaswati recalled.

Due to its geographical situation, Indonesia is vulnerable to the impacts of climate change including increased droughts and floods, changes in planting patterns, and increased pests, all of which threaten the country’s food security, according to Hari Priyono, secretary-general of Indonesia’s ministry of agriculture.

“Indonesia has been focusing on increasing rice production from 54.1 million tonnes in 2004 to 69.05 million tonnes in 2012,” Priyono said in his keynote remarks at an early June media workshop on climate change, which was part of an IFAD series for journalists.

“Agricultural development faces increasingly serious challenges due to climate change as well as conversion of fertile agricultural land for industrial estates and settlements,” he continued.

Prolonged drought and an extended rainy season have struck Indonesia more frequently in recent years, leaving farmers in a quandary over when to start planting crops and causing worries about the country’s food security.

In early June, for example, climate experts here predicted that Indonesia would experience rain throughout 2013, even during the dry season that usually runs from May to September or early October.

Given the changes in climate patterns, the ministry of agriculture introduced in 2012 a ‘cropping calendar’ that advises farmers on the best planting periods, seed variety, fertilisers and pesticides. It has launched new rice varieties that can withstand prolonged drought or flooding, or high salinity due to seawater intrusion.

One expert, however, says these innovations may prove insufficient to deal with the impacts of climate change.

“The problem is we don’t have the technology yet that can predict the exact beginning of each dry or wet season or the severity of floods and drought,” said Zulkifli Zaini, International Rice Research Institute (IRRI) liaison scientist for Indonesia.

To make things worse, almost 100,000 hectares of fertile farmland on the island of Java are being converted into industrial estates and settlements every year.

According to IFAD, around 70 percent of Indonesia’s 245 million people live in rural areas, where agriculture is the main source of income. A least 16.6 percent of the country’s rural people are poor.

“Millions of small farmers, farm workers and fishers are materially and financially unable to tap into the opportunities offered by years of economic growth,” IFAD’s country manager for Indonesia, Ronald Hartman, said.

But Kaswati’s experience seems to show that diversifying means of income can help rural villagers continue to make a decent living from agriculture.

Kaswati’s businesses have only grown bigger. Early this year, she took out a bank loan worth 4,100 dollars to finance her compost business, which has given her financial freedom and power.

“I no longer ask my husband for money to buy food and other household needs, and more importantly my first daughter now studies at a university,” said Kaswati, who until early 1999 had worked as a farm labourer.

Another woman participant who declined to give her name told IPS that her jackfruit cracker business has allowed her to send her children to school.

“My first child finished elementary school only, my second only finished junior high school, while the third only senior high school – but the fourth is now studying at a local university,” she said.

“Now my husband involves me in decision-making, particularly when it comes to my children’s studies.”