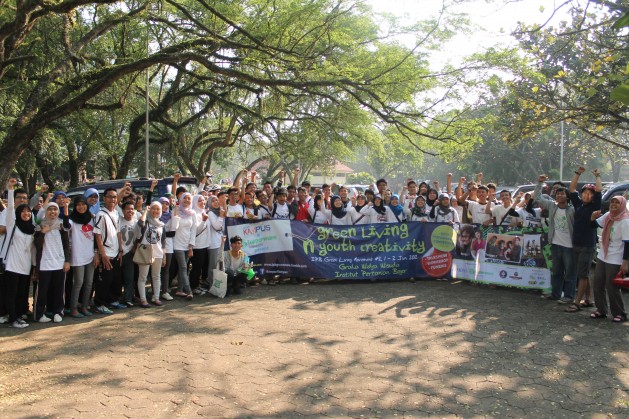 JAKARTA, Jun 17 (IPS) 2012 – Studies on carbon emissions conducted in the Bogor Agricultural University (BAU) in West Java confirm that the worst culprits are students with their trendy lifestyles.

“On average, each student dumps two plastic bags a day and there are more than 3,000 of them on our campus,” Popi Puspita Forestian, a student at BAU, tells IPS.

Besides plastic bags, there are also electronic devices such as CD-DVD players, play stations, TV sets, mobile phones, computers and other devices that college students consider essential to lead a contemporary lifestyle.

“Most students are aware of the costs of their lifestyles to the environment, but they won’t be seen dead out of fashion,” Popi added. “So we decided to work on how to make green activities trendy.”

Another study by the Jakarta-based Institute for Essential Service Reform (IESR) confirms Popi’s assessment that trendy lifestyles are the driving factor behind Indonesia’s incessantly rising carbon emissions – and  students are not always to blame.

IESR arrived its conclusions by setting up an online carbon calculator, www.iesr.or.id/carboncalculator/ that enables every individual to figure out his or her own carbon footprint with the data updated continuously.

“The middle class in the cities of Indonesia are major contributors to greenhouse gas (GhG) emissions – about 50 percent of it, mostly from their use of electronic devices,” said Henriette Imelda, an IESR researcher.

“The excessive use of electronic devices gives a boost to electricity consumption, which in turn increases carbon dioxide (CO2) emission,” the study said.

West Java, Indonesia’s most developed province, is now also the highest carbon emitter in Indonesia, releasing an estimated 12,500 grams of CO2 per capita per day. Banten, Central Java, Sumatra and Kalimantan are not far behind.

Surprisingly, overpopulated and poorly managed Jakarta, with its daily traffic jams, is not among the five major carbon emitting cities.

West Java is a centre for universities and schools where the use of paper for various purposes is massive and the carbon emissions aggravated by the use of electronic devices, lamp bulbs, television sets and electrical appliances such as hairdryers, the IESR study said.

The province is home to no less that 68 universities, 18 of them state-owned; 130 government high schools, thousands of private institutions and non-government organisations (NGOs).

Nearly 50 percent of West Java’s carbon emissions come from electronic devices, followed by incandescent electric bulbs. “This shows the West Java people’s excessive lamp use,” the study said while noting the need  for people to switch to more efficient lighting.

A rapid expansion of housing complexes in the province has raised demands on electricity with the National Power Corporation hard put to meet rising consumption.

“The Sundanese, West Java’s main population, are highly conscious of  looks and fashionable lifestyles. They follow global trends in fashion and buy up the latest consumer products,” Imelda told IPS.

Recently, IESR launched a campaign called ‘Low Carbon Women’, a feature of which is the deployment of a cadre of volunteers called ‘sobat esensial’ (essential friends), who spread information on climate change and ask for commitments to reduce individual carbon emissions.

“Women can do a lot in the global fight against climate change – and they  can start by calculating how much carbon they are producing,” Imelda said.

At BAU, Popi and about 50 of her fellow students routinely pick up plastic bags and litter lying around the campus to send across the message that plastic can harm the environment.

The team encourages the use of reusable cloth bags on campus green by distributing them free. “This year, we were able to give each student a trendy cloth bag,” Popi said.

Indonesia, which has committed itself to reducing its carbon emission by 26 percent by 2020, against a ‘business-as-usual’ scenario, is tapping every social group or community that can help achieve that target.

In 2005, the World Bank rated Indonesia as the third largest emitter of carbon, but that was mostly on account of runaway deforestation to extract timber and make way for plantations, particularly palm oil.

According to Greenpeace large volumes GhGs are also released by the destruction of Indonesia’s peatlands, believed to store about 35 billion tonnes of carbon and released by the plantation industry.

While Indonesia does not provide annual data on emissions, burning coal to produce electricity – mainly to meet demands from foreign investors in ‘dirty’ industries like steel, cement and power-  has boosted pollution levels and carbon release.

In September 2011, Indonesia announced an “action plan” to help ministries and local governments implement low carbon development activities, some of it visible in areas like Rajawati, a lush and green South Jakarta neighbourhood.

In Rajawati every household contributes to the planting of flowering plants and trees nurtured on organic, biodegradable waste.

“All the greenery you see here comes from the efficient conversion of household waste,” Ninik Nuryanto, head of Rajawati’s Women’s Association. “Each household takes care to segregate waste, with plastics going into one bin and biodegradable matter into another.

“In the beginning, fertiliser made from organic waste was just a way to help cultivate flowers in front yards. But, when production exceeded demand, we started selling it profitably,” Ninik told IPS.

“While other neighbourhoods are weighed down with mounting waste, we just can’t get enough of it,” Ninik said.

Money raised from the association’s sales goes into a fund for public services, such as paving roads, repairing sewage canals and the maintenance of a community park.

The main idea, Ninik said, is to get the community involved in green activities and become aware of the importance of maintaining the carbon balance.