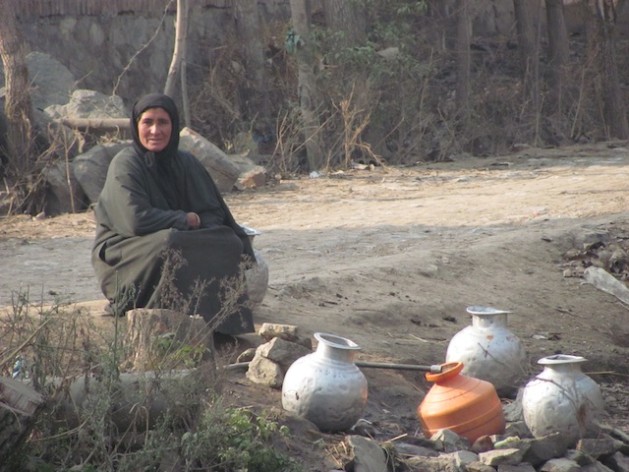 Maryam Akhtar, a farmer in Kashmir, worries the taps will not yield enough water for her family's daily needs. Credit: Athar Parvaiz/IPS

SRINAGAR, India, Aug 16 2013 (IPS) - Zareena Bano has had to skip school 17 times this year to help out on her family’s farm in Tangchekh village in the northern Indian state of Kashmir.

Her teachers say she has the potential to be a brilliant student, but warn that if she keeps missing school she will not go far.

Never before has the 15-year-old had to sacrifice her education in order to support her family, but an acute water crisis in this Himalayan state has made irrigation a constant worry and severely disrupted the way of life for thousands of farming families like her own.

Troubled though they are by the toll the extra labour is taking on their daughter’s schoolwork, Zareena’s parents are in no position to order her to stay away from the fields.

Her father, Gaffar Rathar, says the family is entirely dependent on the yields from his 2.5-acre paddy field and half a dozen walnut trees. Frequent droughts mean a lot of additional hard work for him and his family.

“Sometimes, when water is in extremely short supply, we have to store water in small ponds that we dug ourselves, and plastic containers,” he told IPS.

Most residents of this lush valley, nestled between the Great Himalayas and the Pir Panjal mountain range, are unaccustomed to drought. For generations subsistence agriculturalists have relied on steady rainfall and glacial rivers to irrigate their farmland, but now this scenic alpine region is feeling the pinch of climate change.

The most recent State of the Environment Report (SOER), released by the Directorate of Ecology, Environment and Remote Sensing in the capital, Srinagar, says that all its monitoring stations across Kashmir – except Jammu, which is located 290 km away from the capital – recorded a decreasing trend in total annual rainy days.

A number of other studies carried out in recent years corroborate these findings, adding that glaciers in the Kashmir Himalayas are receding, while snowfall and precipitation are both showing decreasing trends.

A study by Norwegian scientist Andreas Kaab and his French colleagues, which was published by Nature Magazine in August last year, found that increasing temperatures in the region posed no immediate threat to glaciers in the Hindu-Kush Karakoram Himalayas (HKKH) except to those in the Kashmir Himalayas.

Kaab’s findings suggest that Kashmir’s glaciers may be receding by “as much as half a metre annually,” presenting an immediate threat to the rivers that feed the Indus basin.

Jhelum, the largest river in the region, originates in South Kashmir and is fed by glaciers in the upper reaches of the town of Pahalgam. One of the river Jhelum’s primary tributaries, the Lidder, is fed by the Kolhai glacier, which is receding fast.

Quoting a study conducted by Kashmir University’s geography department, Department Head Mohammad Sultan Bhat informed IPS that, since 1975, precipitation in the lower parts of Kashmir has declined by 1.2 centimetres in lower altitudes and eight cm in higher altitudes.

These trends, say experts, bode badly for the future of Kashmir’s agricultural industry: according to figures in the most recent Kashmir Economic Survey, only 42 percent of agricultural land in Kashmir is covered by irrigation facilities like canals and lift stations, while the remaining 58 percent is entirely dependent on rainfall.

Following the enforcement of the Big Landed Estates Abolition Act in 1959, over 9,000 landowners were stripped of over 100,000 hectares of land, which was transferred to peasants, thereby creating an agrarian-based economy in Kashmir.

Over 80 percent of the population is now dependent on agriculture for a livelihood, cultivating such crops as rice, maize, pulses, saffron and potatoes.

Official statistics indicate that 75 percent of agricultural land – roughly 46,943 hectares – is under paddy cultivation in Kashmir, indicating that rice farmers comprise the bulk of agriculturalists here.

Early this year, scientists from the earth sciences department at the Kashmir University revealed that increases in temperature and a considerable reduction in precipitation would result in a sharp decrease in paddy yields across the region.

Earlier this year, renowned scientists Shakil A. Romshoo and M. Muslim presented a paper at the Indian Science Congress in New Delhi, predicting that rice production would decrease by 6.6 percent (over 4,000 kg per hectare) by 2040.

According to Romshoo, these projected declines are based on predictions that maximum and minimum temperature will increase by 5.39degrees Celsius and 5.08degrees Celsius respectively by 2090.  Precipitation levels are likely to decrease by about 16.67 percent by 2090.

Most farmers in Kashmir earn roughly 1,900 dollars a year and produce an annual average of 40 quintals (4,000 kgs) of paddy per hectare. Experts say these farmers will struggle to withstand the decrease in yields that will undoubtedly accompany the predicted weather changes.

Already countless families are feeling the pinch of decreasing water supplies. Nasreena Begum, a mother of three children living in the village of Surigam in the northern Kupwara district, spends several hours every morning walking over a kilometre to fetch water from a stagnant pond, since the stream that once bordered her village has completely dried up.

She told IPS she makes the trek several times a day in order to collect enough water to meet her family’s daily needs.

In addition to drinking and washing water, she must also ensure that the family cow is properly watered, since her children rely heavily on the cow’s milk for nourishment and she herself sells five litres a day to the local milkman in order to supplement her husband’s meagre earnings as a daily labourer.

As the rains become thinner, and the glacier-fed rivers slow to a trickle, she and many other farming families will be forced to hunker down to weather a hotter and drier Kashmir.