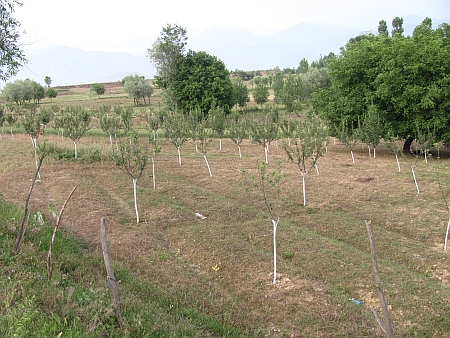 SRINAGAR, Nov 30 2011 (IPS) - Sammad Sheikh of Tangchekh village in north Kashmir cannot understand why the rice fields that his family cultivated for generations are drying up.

“It is a mystery as to why water is getting scarcer in summers,” he says. “This has been happening for the past few years though there have been one or two good summers in between.”

With no assurance of water availability, Sheikh, like his fellow farmers in the region, is looking for alternatives to paddy cultivation.

“I have heard that most of the farmers in central and south Kashmir have switched from agriculture to horticulture. I am now seriously thinking of putting a portion of my seven acres under crops that are not water-intensive,” he told IPS.

Farmers in this Himalayan region have heard of climate change. They wonder why the government is yet to step in with improved irrigation facilities to help them tide over the summer months.

“The government has constructed water ponds in some areas for water harvesting, but much more has to be done to cover the entire area,” says Mukhtar Naikoo. “Anyone can see that the droughts have become frequent and rainfall scarcer and more erratic.”

According to the study, ‘Recent Trends in Meteorological Parameters over Jammu & Kashmir (1976 to 2007)’, by A. K. Jaswal and G. S. Prakasa Rao of the Indian Meteorological Department, temperatures are increasing over this state – often likened to Switzerland for its alpine charms and snow-capped mountains.

“Annual rainfall and rainy days are decreasing in both the regions of the state except at Jammu where rainfall trend is significantly increasing (12.05 mm per year),” says the study.

Naikoo has vivid memories of the farmer-friendly weather in Kashmir: “It would rain for days together. And, at times, we would perform a ‘bandar’ (an oblation) seeking God’s pleasure for cessation of rains.”

Like Sheikh, Naikoo is baffled at the creeping dryness. “Maybe God is not happy with our deeds. We are a sinful lot.” Naikoo is not yet ready to switch to horticulture. “I am still hopeful that God will not let us down. Things will get better.”

Scientists in Kashmir are worried at the rapid conversion of paddy lands for horticultural use and the mushrooming of commercial establishments and residential colonies in the areas which were farming lands.

According to official figures, 80 percent of Kashmir’s seven million people are directly or indirectly engaged in agriculture and allied sectors. Much Kashmir’s total area of 2.4 million hectares is mountainous or forested.

Official statistics indicate the 151,352 hectares of land that used to be under cultivation in the state, a few decades ago, has now shrunk to 46,943 hectares.

“This is a dangerous trend,” warns Zaffar Ahmad Reshi, a professor in Kashmir University’s Botany department. “The government in Kashmir has no land-use policy and has failed to provide proper irrigation facilities to the farmers.”

Reshi told IPS that necessary adaptation to climate change in Kashmir includes augmentation of the irrigation network for farming.

According to the Kashmir government’s Economic Survey report for 2010-11, only 41 percent of agricultural land is covered by irrigation facilities with the rest dependent on rain.

Reshi stresses that Kashmir cannot afford to lose all its agricultural land to horticulture and built-up areas. “Rice is the staple food of Kashmiris and it is a primary commodity here. We are already importing more than 50 percent of our rice,” he said.

Naikoo has a similar perception, though from a personal point of view. “For generations our family never bought rice in the market. We grow what we need and more in our rice fields. We can’t think of any other way,” he told IPS.

But, other farmers are more adventurous and have been shifting away from paddy to cash crops like apple, almond and walnuts.

“The trend could be a consequence of climate change as farmers find it increasingly difficult to irrigate their rice fields,” says Shafiq Ahmad Wani, director of research at Kashmir’s Agriculture University.

“In the Brang area of south Kashmir, we have observed an almost total conversion from agriculture to horticulture with farmers attributing it to lack of irrigation facilities and the absence of a marketing system.”

According to Akhtar Hussain Malik, a botanist at Kashmir University, the drop in rice and maize cultivation has resulted in a lack of fodder for cattle. “Our animals are already suffering from insufficient fodder with the degradation and shrinking of pastures in Kashmir.”

Farooq Ahmad Lone, director at Kashmir’s agriculture department says the state government has plans to providing bore wells to farmers whose lands are dependent on rains.

“We suffered a 25 percent loss in maize production this year. We intend to mitigate these losses by providing bore well facilities to farmers in the hilly areas,” Lone told IPS.