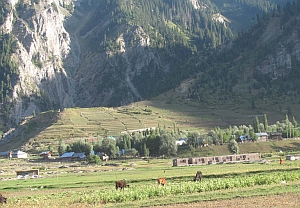 Cattle from Gurez's villages often stray across the LoC into Pakistani territory and are lost forever. Credit: Athar Parvaiz/IPS

“I can cope with the snow that covers my land for five months of the year and the rising costs of farm inputs like seeds and fertiliser, but that fence has seriously reduced my income,” Bhat tells IPS, pointing to the ‘separation barrier’ set up by the Indian army to deter infiltration across the Line of Control (LoC).

At places the fence is several km from the LoC – the ceasefire line drawn up where the Indian and Pakistani armies stood facing each other at the end of the 1971 war – leaving a wide ‘no-man’s land’ dotted with farms and hamlets.

For the villagers the fence represents a ‘small divide’ running along the ‘big divide’ of the LoC that separates families torn apart by the 65-year-old dispute between India and Pakistan over ownership of the former princely state of Jammu and Kashmir.

“The fence is creating serious difficulties for us,” says Bhat. “Sometimes we have to walk several km to a crossing point just to visit a neighbour who may only be a shouting distance away on the other side of the fence.”

“When the fence was completed in 2004 we were told that it would help stop the infiltration of militants,” recalls Bhat. “We agree that erecting of the fence is a requirement, but it should have been located closer to the LoC.”

Col. J.S. Brar, the Indian army spokesman in Jammu and Kashmir, told IPS that the fence has proved extremely effective in deterring infiltration. “The fencing is actually part of a surveillance grid which makes use of detection sensors as well.”

In August, the army deployed unmanned aerial vehicles along the LoC in Gurez and other frontier areas of north Kashmir to augment the surveillance grid. “Such electronic equipment helps prevent infiltration from across the LoC,” Brar said.

The barrier consists of a double-row of wire fencing and razor-edged concertina wire 2.4 -3.7 m in height with the narrow space in between mined. At places the 550 km-long fence features thermal imaging devices and motion sensors.

In spite of the gadgets and fortification, the Gurez valley continues to be a favoured point for infiltration from Pakistan-controlled territory. On Aug. 20, the Indian army shot dead 12 militants attempting to cross over, losing an officer in the process.

Such incidents add to the worries of the 35,000 people of Gurez who already have to cope with a lack of basic facilities such as good roads and medical care.

“We fear that these incidents could lead to exchanges of gunfire and escalate into artillery shelling across the LoC, making life here hell,” Rasheed Lone, a Gurez villager, told IPS.

“I vividly remember a mortar shell fired by Pakistani troops falling on the bus terminal and killing two persons on spot during the 1999 (undeclared) war between India and Pakistan on the LoC at Kargil,” Lone said.

Bomb shelters built near schools and other institutions in Gurez testify to a time when artillery exchanges, sometimes lasting days, were a regular feature of life along the LoC.

Since November 2003, a ceasefire agreement between the two countries has held, though sporadic infiltration through the Gurez valley threatens to revive the shelling.

Fears of a revival of the murderous exchanges of artillery starting up again are shared by people on the Pakistan side of the LoC in the Neelum valley, across from Gurez.

On Sep.16, the British Broadcasting Corporation (BBC) reported people in the Neelum valley, an international tourist detination, staging protests against renewed militant activity in the area, fearing that it could jeopardise the ceasefire.

“Locals say that Pakistan-based militants are flocking to the area and crossing into Indian-administered Kashmir to launch attacks there. They fear that retaliatory fire from the Indian side may threaten the 2003 ceasefire and life in the valley,” the BBC report said.

For now the main worry on the Indian side is over the sustainability of farming and livestock breeding. “There may be no firing but cattle put out to graze in the area between the fence and the LoC wander off to the Pakistani side and are lost forever,” said Lone.

“In July this year, 85 heads of cattle, belonging to my village of Budap, vanished and they were worth at least 50,000 dollars,” Bhat said. “We cannot afford to bear such losses and have asked the authorities to help us recover the animals or compensate us. ”

The deputy commissioner of Bandipora district, Manzoor Ahmad Lone, confirmed that cattle do stray to the Pakistani side. “I have brought this matter to the notice of the higher administration and also army officials. But we have not devised any mechanism to cope with the situation so far.”