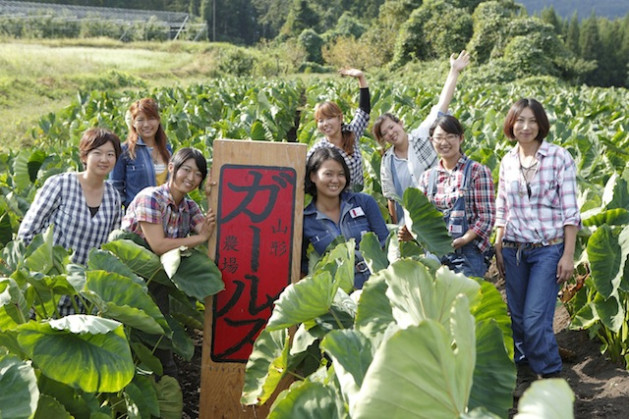 Members of Girls Farm, based in Japan’s Yamagata Prefecture, are changing the image of agriculture. Credit: Girls Farm

TOKYO, Jun 26 2013 (IPS) - Yukako Harada, an energetic 29-year-old, is part of a small but determined band of women farmers working hard to revitalise Japan’s moribund agricultural sector, which is feeling the crunch of an ageing population and a flood of cheap imports.

From accounting for half the country’s economic output just after World War II, agricultural production has shrunk down to just 1.2 percent of the world’s second largest economy, generating only 39 percent of Japan’s food needs.

“It’s time for a makeover, to save Japanese farms,” Harada told IPS. “And the only way to do this is to get youth and more women involved in agriculture.”

In 2010, Harada, who was born in Tokyo, joined the Girls Farm, a project launched in Yamagata Prefecture, located in the Tohoku region of Honshu Island, by a local female farmer keen to change the stodgy image of Japanese agriculture.

Here, 400 km west of Tokyo, fertile land produces rice, watermelons and grapes. Thanks to Girls Farm, the region is quickly becoming the poster child of a new and improved agricultural system, as images of smiling young women working happily in the fields dispel the stereotype of farming as a gender-biased and backbreaking activity.

According to Professor Masao Fukunaga, an economist specialising in rural development, there is a renewed interest in farming not so much as a profit-generating activity but as a mental release from the stresses of city life, as well as growing awareness of the need to boost the country’s food security.

The process of agricultural transformation underway in Japan offers crucial lessons for African farmers, according to Connie Magomu Masaba, an agricultural expert from Uganda who participated in a recent international conference in Japan on economic development in Africa.

As Japan sets its sights on the African continent as a crucial market for exports and a vital source of natural resources, closer ties between the two regions are inevitable.

As these links are forged, rural communities are keen to have their voices heard, so they can inform the trade and development agenda. This is particularly crucial in African countries, where more than 85 percent of rural farming populations live at the subsistence level.

The recent summit provided a forum for women farmers to share ideas and strategies for boosting the agricultural sector while also securing a better deal for women.

“The way…to reduce poverty is by fostering value-added agribusiness in Africa, which means protecting the rights of rural farm owners including women,” Masaba told IPS.

Masaba is the manager of the Kalangala Oil Palm Growers Trust (KOPGT), an initiative designed to produce vegetable oil that now employs 600 women and is managed by Uganda’s ministry of agriculture, animal industry and fisheries, located close to Lake Victoria.

Euralia Nabbosa is one of the project’s beneficiaries. Since joining in 2006, she has acquired 10 acres of land plus an extra three acres for her children, and is no longer forced to make do with simply eking out a living.

She is also one of only very few women to have entered the male-dominated palm oil sector.

Supported by a grant from the International Fund for Agricultural Development (IFAD), the project incorporates 1,600 farmers registered with the KOPGT, who supply their yields to Oil Palm Uganda Limited that supplies edible oil for national demand and export.

All the farmers (1600 FARMERS, 600 ARE WOMEN percent of whom are women) earn around 390 dollars per month and work in a system where the selling price is based on negotiations between them and the purchasing company.
To capitalise on this trend, experts say that the government must not only implement policies to support domestic farmers, but also carve out a special place for women agricultural workers to help revive the industry.

Rice production, heavily subsidised by the government, is the only crop that can feed Japan’s population of 127 million without relying on imports of staples like wheat, meat and vegetables.

In 1999, 2.8 million households were involved in commercial farming enterprises; today that number has fallen by 200,000 families, who are now heavily dependent on non-farming income.

In total, the agricultural industry comprises just over one percent of the country’s gross domestic product (GDP), which touched six trillion dollars in 2011.

This situation, experts say, is the result of a national policy that ignored agriculture in favour of industrial development – through the auto manufacturing and electronics sectors – to turn Japan’s devastated post-war economy into a high-tech exporter nation, and the third largest economy in the world after the United States and China.

The downside of that march into material prosperity, according to Yoshie Oguno at the ministry of agriculture, fisheries and forestry, was that it bulldozed a huge part of the agricultural sector.

Urbanisation spread rapidly, vast areas of rural farmlands were converted into factories, and family farms – averaging one to 1.5 hectares – were left in the care of ageing parents as their children moved to the cities in search of better paying jobs in more lucrative fields.

Data from the ministry of agriculture suggest that in the 1960s, an average of seven million people per month migrated from rural to urban areas.

But now, the prospect of footing huge bills for food imports to feed a massive ageing population is pushing the government to invest heavily in solutions to reverse this trend.

It recently poured 50 billion dollars into efforts to promote awareness on women farmers’ right to land ownership and income, cutting against the grain of traditional farming culture where farm titles are held by the husband or father in a family.

“This is the only way to go if we are going to attract the younger generation who expect gender equality,” Oguno told IPS.

Professor Tomoko Ichida, an expert on farming populations, told IPS that simply improving women’s income could have a positive impact on the limping sector.

“My research has shown that women farmers are good at innovation. They are bringing new value-added products – jams and pickles made from fruit and vegetables, or small restaurants, for example – into the market, which have become popular with Japanese consumers,” she said.

Government data released in 2011 showed that more than three-quarters of new agribusiness ventures – the ministry recorded 10,000 start-ups in 2010 – were headed by women, highlighting the shifting gender dynamics in an industry that was, until a few years ago, controlled by men, with women only entitled to a meagre share of joint family income.

Yoshiko Kaido, 61, hailing from the Tokyo suburb of Ibaraki, won a Mayor’s award for her jam-making business in 2003. “I now have my own income that is separate from the family farm,” she told IPS. “It makes farming far more worthwhile.”

While farm workers are keen to see results right away, experts caution that the change will not take place overnight.

Seminars on business management have become a popular means of creating self-sufficiency among women business owners, but experts say a lot more needs to be done to encourage the youth, who accounted for six percent of the agricultural workforce in 2011.

Despite some shortfalls, the tides seem to be turning, and if the government lays its plans carefully, it could usher in a new era in which women buoy up a productive and lucrative agricultural sector.