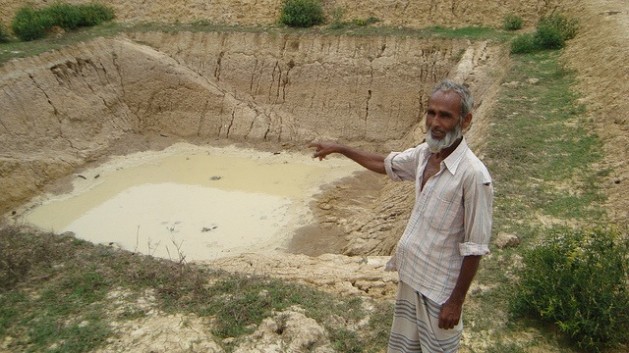 A farmer in northwestern Bangladesh points to one of the newly dug ponds that are helping to boost food production. Credit: Naimul Haq/IPS

CHAPAINAWABGANJ, Bangladesh, Jun 16 2013 (IPS) - “I would never have believed it possible to get a bumper rice harvest during the drought season,” 43-year-old Mohammad Shajahan Ali, a farmer hailing from the village of Magtapur in Bangladesh’s northern Chapainawabganj district, told IPS.

Yet this is exactly what he has got. Leading a proud tour of his small holding, Ali stops beside a pond, dug close to his modest, thatched-roof home. Without this, he says, the dry season that runs from June to October would have brought with it the usual hardships and hunger that most farmers in this district, 330 km from the capital, Dhaka, are accustomed to.

“We usually only cultivate aman rice (a deepwater crop) during the summer monsoon. But since we began digging these mini ponds for storing water, we’ve had extra production, almost year-round,” he said.

This year Ali harvested 12 tonnes of aman rice from his three-acre plot, making a 450-dollar profit, in addition to earning 542 dollars from growing and selling other varieties of rice, all grown using rainwater harvested in his 12 square-metre pond.

To the small farmer, whose income last year barely touched 200 dollars, this was a small fortune.

He attributes this windfall to a project sponsored by the United Nations Food and Agriculture Organisation (FAO) to tackle a chronic water shortage here by digging 100 ponds in villages around the region free of charge.

Rashid Miah, a veteran farmer in the Nachole division of Chapainawabganj, showed IPS the small diesel-powered motor pump that channels water from the small pond into his four-acre paddy field.

Just 200 metres away, his neighbour Jashimuddin’s field lies barren, but Miah believes it is only a matter of time before he, too, reaps the benefits of harvested rainwater.

Chapainawabganj is one of seven districts comprising the 8,000-kilometre Barind Tract, an arid drought-prone region in northwestern Bangladesh that accounts for 60 percent of the nation’s rice production.

Paddy farmers here have recently been struggling to secure a harvest in the face of changing climate patterns, with experts warning that output in the world’s third largest rice producing country is under severe strain.

Studies show that the groundwater table in the Barind is gradually sinking, while annual average rainfall has dropped to less than 1,200 millimetres, against the national average of 2,350 mm.

With about 2.7 million hectares of paddy fields – out of a total of 5.8 million hectares of arable land in the Barind Tract – affected by drought during both dry and wet seasons every year, researchers predict a 7.4-percent annual drop in rice production.

In a country with a population density of 900 people per square-kilometre and an annual food deficit of 1.8 million tonnes, a decline in food production in the Barind region is a major concern for government, civil society and farmers alike.

Already, demand for rice is rising along with the population, which is expected to increase from the current 150 million to a staggering 192 million by 2025.

Over one-third of Bangladeshis live on less than a dollar a day, while 35 percent of the population is malnourished and 45 percent of children under five are underweight and stunted.

Anxious to take action against an impending crisis, the government, with support from the FAO, launched a comprehensive disaster management programme in 2005 aimed at enhancing the capacities of the agriculture department to cope with climate change and possible disasters in the agriculture sector.

“We found frustrated farmers, barren farmland, abandoned deep tube wells and declining production,” he told IPS. Quickly realising that water, or the lack of it, was at the root of all the problems, the food agency began to dig 12-square-metre mini ponds to store summer monsoon rainwater for use during the dry season.

Part of the reason for the project’s success was that it built on indigenous knowledge that has been present in this region for generations.

According to 56-year-old Ashutosh Podder, a local farmer from the neighbouring Hamidpur village, “Mini-ponds are not new – they are simply a modern version of dug wells, known locally as ‘kua’, which our ancestors have used for centuries.”

He told IPS this traditional wisdom had initially been put into practice at higher levels of elevation, since over 47 percent of the Barind Tract is classified as highland (between 18 and 22 metres above sea-level), compared to other agricultural regions located primarily in low-lying floodplains.

But as temperatures got hotter, and rainfall thinner, these dug wells, along with the gigantic rivers that once watered this region – the Jamuna, Mahananda and Korotoa – dried up, seriously affecting farmers’ access to surface water.

Attempting to overcome the looming water crisis in the region in the late 1970s, the Barind Multipurpose Development Authority (BMDA) installed over 8,000 electric water pumps to facilitate continued irrigation, while hundreds of kilometres of narrow canals were dug to allow water to meander through roughly 600,000 hectares of rice fields.

But BMDA Project Director Dr. Abul Kashem told IPS that a receding groundwater table made this task much harder, resulting in over 30 percent of the pumps lying idle during periods of drought.

In desperation, farmers began to flee the drought-ravaged region. A 2008 survey of several villages revealed that 41 percent of farmers and agricultural labourers left to seek work in other regions of the country during the dry season, when temperatures reach as high as 40 degrees Celsius.

But now the ancient way of life in this region has come full circle, with experts hoping that the pond system will ease farmers’ burdens once and for all. The same local NGO that carried out the 2008 survey recently reported that fewer agricultural labourers are leaving their small-holdings, relying instead on mini ponds to reap a harvest at unexpected times.

An agricultural officer in Nachole told IPS that roughly 4,500 farmers in his district are benefiting from the project, while over 15,000 farmers throughout Chapainawabganj have experienced higher yields as a result of improved irrigation.

Hoping to multiply the success of the project, major agencies like the World Bank and the FAO have awarded the government a 22.8-million-dollar grant to try out the scheme in other parts of the region, and throughout Bangladesh.