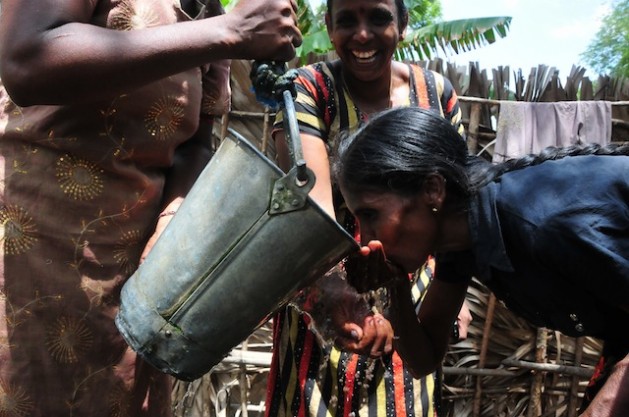 COLOMBO, May 30 2014 (IPS) - Stuck in mid-day rush hour traffic, commuters packed tight into a tin-roofed bus in Sri Lanka’s capital, Colombo, peer expectantly up at the sky that is beating a savage heat down on the city.

No one speaks, but it is clear they are all waiting for the same thing: for the heavens to open up and provide some relief from the scorching weather that is slowly cooking this island nation.

Over 200 km east, in the agricultural district of Ampara, farmers and rural folk wait equally expectantly for the elusive monsoon, already a few weeks late in coming.

Water levels at the Senanayake Samudraya tank, which holds the bulk of the district’s water needs, are dangerously low, having dropped below 30 percent of the reservoir’s capacity at the end of May, according to the department of irrigation.

All over the country, low-level anxiety over the water shortage is slowly giving way to panic. With each day that the rains do not fall, food shortages increase, poverty worsens and the economy lurches in uncertainty.

Strangely, the government is yet to officially declare a drought situation, even though water levels in most major reservoirs – which supply close to 46 percent of the country’s electricity needs – are alarmingly low.

No rain, no rice

“The problem is that this is not a one-off drought, this is the third big drought in three years." -- Rajith Punyawardena, chief climatologist at the department of agriculture
Given that over 75 percent of Sri Lanka’s population lives in rural areas, with a large percentage engaged in rice farming, a drought threatens the country to its very core.

Harvest losses mounted in the first half of this year, leaving farmers and officials fearful that a predicted weaker-than-average southwest monsoon season will exacerbate the situation.

“It is not looking very good,” warned Rajith Punyawardena, chief climatologist at the department of agriculture, pointing out that the main rice harvesting season, which concluded in April, recorded a loss of 17 percent compared to last year.

According to a recent update from the Food and Agriculture Organisation of the United Nations (FAO), Sri Lanka only produced 2.4 million metric tons of paddy during the main harvest in 2014, compared to around 2.8 million last year.

The FAO predicted that overall paddy output on the island in 2014 was likely to record a 19 percent loss from the previous year, with an expected production of 3.8 million metric tons – eight percent less than the five-year average yield since 2014.

Weerakkodiarchchilage Premadasa, a farmer from Thanamalvila in Sri Lanka’s southeastern Uva province, told IPS he had already lost half of his two acres of paddy to the drought. “If the rains don’t come, or are too weak, I will have to mortgage the house,” he said.

High demand and predictions of further losses pushed rice prices up by 23 percent this past April.

In affected regions across the northern, eastern and northwestern provinces, over 768,000 persons out of a total population of 8.3 million have been identified as food insecure, double the 2013 figure. In addition, 18 percent of all households in over 15 districts in those same regions were consuming low-calorie diets.

Over 67 percent of the affected population are farmers who rely heavily on irrigated water for their livelihoods and daily subsistence. An unbroken string of extreme weather events since 2011 has heightened food insecurity and severely impacted rural populations’ resilience to natural disasters like droughts and floods, the report added.

Experts say the northern province, which accounts for 10 percent of the national paddy harvest, is particularly vulnerable. It lost over 60 percent of an estimated 300,000-metric-ton harvest in April, according to Sivapathan Sivakumar, the provincial director for agriculture.

Having borne the brunt of the island’s protracted civil conflict, which finally closed its bloody 30-year chapter in 2009, the people here have shouldered about as much hardship as they can take. A possible debt-trap, caused by repeated losses in harvest, has them on the edge, Sivakumar added.

“We have to come up with a major assistance plan to help them,” the official told IPS.

According to the joint WFP-governmental report, the northern districts of Mullaitivu and Kilinochchi have been hardest hit, with 49 percent and 31 percent of their respective populations identified as food insecure as a result of drought.

Those who are monitoring the situation say the drought will bring more than just hunger. Already food shortages are taking a disproportionate toll on low-income households, who have no safety net against harvest losses and rising prices.

In the districts surveyed by the WFP, a full 50 percent of households were spending over 65 percent of their monthly income, about 20 dollars, on food.

Poverty levels in these areas are also rising, with families reporting damage to agricultural land, limited employment opportunities as a result of scarce yields and significant reductions to their income.

“The average income in these areas is reported to be 37 percent lower than the national poverty line [of 29 dollars] for the month of March,” the report found.

In the northern Vavuniya district, actual income for the month of April was 67 percent below expected income.

The WFP has recommended the immediate commencements of six months of emergency assistance to the worst affected populations, but officials say this is easier said than done.

“The problem is that this is not a one-off drought, this is the third big drought in three years,” Punyawardena told IPS. “We need a national plan to assess and deal with the impact of extreme weather events.”

A drought between December 2011 and October 2012 affected 1.8 million people in the same regions currently enduring the dry spell, according to assessments by the International Federation of Red Cross and Red Crescent Societies. During that time, total harvest losses were feared to be between 15 and 20 percent.

So far, the only drought-related move has come from the ministry of agriculture, which has recommended that 35 percent of the 779,000 hectares of land under paddy cultivation be used for crops that require less water.

But Punyawardena believes that paddy farmers steeped in traditional farming practices are unlikely to change their methods or crops quickly. Such a move, he said, “needs time and a bit more work.”

As Premadasa, the farmer from the Uva province, pointed out, “Farmers like me need advice at the start of the planting season so we can plan accordingly. We get some information, but we need more detailed updates.”

Similar long-term planning will also be required to cushion the blow a weak monsoon could deliver to the country’s energy sector.

The Ceylon Electricity Board reported that as of the last week of May, hydro power was only meeting 11.8 percent of the country’s energy needs, compared to 46 percent during previous monsoon seasons.

Water experts told IPS there is an urgent need for an integrated national water management policy that takes note of fluctuating rain patterns.

Such a policy, she said, would allow for the kind of countrywide planning that is woefully lacking right now.

Until the government puts its best foot forward, the people of Sri Lanka can do little more than look to the skies and pray for the rain to fall.