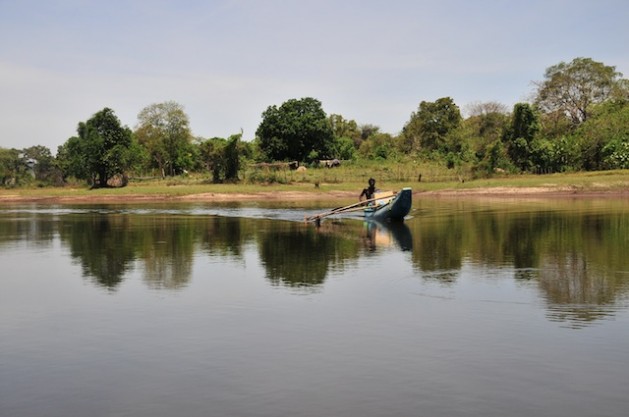 COLOMBO, Jul 22 2012 (IPS) - For many Sri Lankans, the effects of climate change can be summed up in one word: rainfall.

“The biggest impact (of climate change) is rainfall or the lack of it,” W L Sumathipala, one of Sri Lanka’s foremost experts in changing climate patterns, told IPS on a scorching hot and humid day in Colombo.

“The availability of water can effect multiple things in Sri Lanka from crops to power generation to the currency,” Sumathipala, who formerly headed the climate change unit at the Ministry of Environment, added.

The last six months, with their merciless combination of scarce rainfall and blazing temperatures, have proved his statement to be true. The failure of the seasonal monsoon to deliver adequate amounts of rain have had a serious impact on lives, livelihoods and the economy.

In the north central districts, a vital region for the country’s staple rice harvest, smaller irrigation reservoirs have run dry, while their larger cousins, fed by rivers, have stopped issuing water to farmers because their water levels are too low.

The Parakrama Samudraya, a 20 square-kilometre tank in the Polonnaruwa District, was only eight percent full by the first week of July due to lack of rain.

“This is probably the worst (drought) we have had in recent years,” irrigation engineer R M Karunarathna told IPS.

The drought will almost certainly have a serious effect on the rice harvest. Farmers who depend on the Parakrama Samudraya and connected reservoirs have held public protests warning that as many as 40,000 acres of paddy fields may have been lost.

Further north, in areas that have recently emerged from three decades of civil unrest, the lack of water is threatening to undo some of the gains made since the war ended in May 2009, according to the latest United Nations updates for the country.

“The delay of the north west monsoon rains has caused severe drought condition in the country affecting the country’s agricultural sector (and) threatening to destroy the majority of expected yields from paddy, vegetables and other food crops. According to the Ministry of Agriculture, nearly 150,000 acres of cultivation lands are in danger of getting destroyed,” the updated warned.

In an average year, around 42 percent of the country’s power supply can be met through hydropower, Thilak Siyambalapitiya, an energy consultant and a former engineer with the Sri Lanka Electricity Board, told IPS.

During years where the rains have been exceptionally high, between late 2010 and early 2011 for instance, the contribution of hydropower has been as high as 50 percent.

In fact in 2011 the Ceylon Electricity Board (CEB) recorded a rare profitable year, largely due to the high hydro generation component, Siyambalapitiya said.

“This year if CEB can meet something like 25 percent (of power needs) from hydro, we will be lucky,” he predicted. But even that may be optimistic: by early July less than 15 percent of the required power was met through hydro generation.

It costs about 13 rupees (about one U.S. cent) to generate a unit of electricity using hydropower, while thermal costs increase the unit production price to seven cents for coal, 11 cents for furnace fuel and 18 cents for diesel. “The cost differences are exorbitant,” Siyambalapitiya said.

To add to the woes, the Sri Lankan rupee has fallen steadily against the dollar since late last year.

In mid November 2011, the Central Bank stopped intervening to strengthen the currency and in the ensuing eight months, the rupee has weakened by about 17 percent.

“When the rains stay away and the hot weather patterns evaporate surface water, this is what we get,” Sumathipala said.

The phenomenon will likely continue; experts predict that water scarcity will play a crucial role in the coming years.

The latest Central Bank annual report said that temperatures have recorded an increase of around 0.45 degrees Celsius in the last two decades. A 0.5-degree rise can reduce the rice harvest yield by about 5.9 percent.

The Bank added this would be disastrous for the country’s 1.8 million people – close to 10 percent of the country’s population – who depend on agriculture for survival.

“Sri Lanka is vulnerable to the impact of climate change largely due to its critical dependence on water resources for biodiversity, food security, livelihood and power generation,” the report said.

The Second National Communication on Climate Change 2012, a report by the Ministry of Environment, also confirmed that the pattern of rising temperatures and falling rains would have a big impact on rice harvests and yields.

The same report revealed that while the dry zone will continue to get drier due to less rain and increasing temperatures, the wet zone is likely to get more rain than needed. It even suggested transporting excess water between the two zones.

The high concentration of rain in the wet zone increases the risk of flood-related damages as well as the spread of vector diseases like dengue.

In the last five years Sri Lanka has been logging an increased number of dengue victims during and after monsoon rains, especially in flat urban areas like the capital Colombo.

“The city of Colombo is vulnerable to (flash flooding) where the low-lying parts of the city go under water whenever there is high intense rain falling even for a few hours,” the report said.

Experts say that to meet the evolving nature of water availability, better coordination between public and private enterprises and experts is vital.

“Some the changes and patterns can be predicted, but we need better communication to be ready for them,” Malika Wimalasuriya, head of the Climate Change Unit at the Meteorological Department, told IPS.