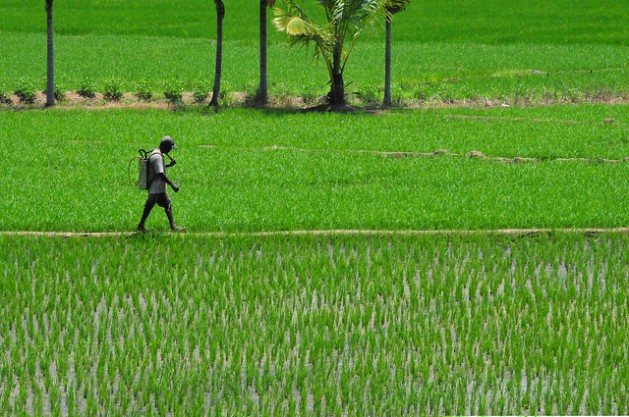 Lying on the island’s Northeastern coast, Verugal began the year with incessant rainfall. Between January and February of 2011, the East coast received a year’s worth of rain, which destroyed over 7,000 hectares of rice crops in Verugal and about 17 percent of the country’s annual rice harvest.

Some villages were cut off for weeks on end.

“I was working in a life jacket for over two weeks,” said Ponnabalam Thanesvaran, head of the Verugal divisional secretariat and the highest-ranking government official for the region.

Just as the rains abated around September, Verugal fell foul of nature’s wrath once more, only this time weathering the flip side of the coin: drought.

Thanesvaran told IPS that between September and October his main task was providing drinking water to remote villages, some of which had been cut off by floods just nine months ago. “It was incredible how, within less than a year, we had a flood and a drought,” he observed.

With next month’s United Nations Conference on Sustainable Development, Rio+20, just around the corner, local experts are pushing for increased efforts to get the message on changing climate patterns out to the most affected and least informed populations – like rice farmers in rural Sri Lanka.

The bulk of harvest losses has been attributed to the floods, but Dissanayake said that the drought was also responsible for low yields.

From heavy losses in 2011, the country is slated to experience a record high harvest this year as extreme weather events ease, the Food and Agriculture Organisation (FAO) said early this month in a harvest forecast.

“The world rice harvest for 2012 is expected to surpass the strong showing of 2011 as the erratic climate conditions caused by La Niña dissipate and farmers increase their plantings,” the forecast said.

Thanesvaran told IPS that many of the farmers in Verugal were expecting better crops this year, a sentiment similar to that expressed by others in the adjoining Polonnaruwa District, which also suffered grave losses during the floods.

“This time, all seems well,” predicted Karunaratne Gamage, a farmer from the rice-producing Madirigiriya area in Polonnaruwa, mainly because weather patterns have been stable.

But experts like Dissanayake feel there is adequate research to indicate that changing weather patterns have severely impacted rice production in Sri Lanka and should be dealt with very seriously.

Any change in rice production has, and will continue to have, an impact across the country. According to the Census and Statistics Department, a typical Sri Lankan household consumes 36 kilogrammes of rice per month, making it the single post popular food item by a wide margin. For rural families, rice is a staple for all three meals of the day.

Research by the Sri Lanka Foundation for Environment, Climate and Technology, which carries out extensive research and analysis on climate change and its impact on local crops, says that the influence of changing rain patterns on annual rice yields over the last two decades has been “significant”. Research shows that during the El Niño/La Niña Southern Oscillation (ENSO) periods, rice harvests were seen to fluctuate.

This pattern shifted during the cooler La Niña phase, resulting in cyclones and floods, not only in Sri Lanka but in other parts of Asia as well.

Dissanayake believes this is because farmers in Sri Lanka use rain water for rice and rely on a weak water management system. “Last year’s secondary harvest was better, because the flood waters (helped) the planting,” he said.

“The problem is that farmers don’t understand the gravity of the situation. They are still used to waiting for the rains, and for the government to release water from the reservoirs,” he said.

Gamage admitted that, on the ground, there is limited knowledge of changing climate patterns and adaptation strategies.

“People know that there is something strange (going on) with recent weather patterns, but beyond that, there is not much knowledge or planning (around) possible changes.”

The RRDI has developed rice varieties that can withstand severe weather changes, but Dissanayake said they are currently being used only in areas that have been deprived of water for up to three months. He lamented that farmers have little or no interest in using new, weather-resistant strands of rice.

Regardless of rainfall, farmers continue to use seeds that take up to five months to mature during the main harvesting season, or three months during the secondary season.

Dissanayake told IPS that rice was considered a “poor man’s crop”, one that brings in meagre profits and fails to attract big business. As a result, “there is not much money invested in new technologies or (adaptation methods),” he said.