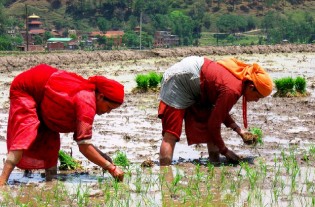 By François Djékombé
Chad has more than 400,000 square kilometres of arable land, but poor rainfall and a reliance on basic agricultural techniques have left the country with a grain deficit in the past two years. The government is turning to mechanisation in a bid to improve harvests.

By Baudry Aluma
Just two years ago, rice farmers on the Ruzizi plain in the eastern part of the Democratic Republic of Congo were content to harvest 2.5 tonnes of rice per hectare. The adoption of new techniques has seen their output rise to between six and eight tonnes, with smallholder farmers also increasing their local market share.

By Amantha Perera
For many Sri Lankans, the effects of climate change can be summed up in one word: rainfall.

By Amantha Perera
The year 2011 was one of extremes for the small Sri Lankan village of Verugal.
ADVERTISEMENT ADVERTISEMENT