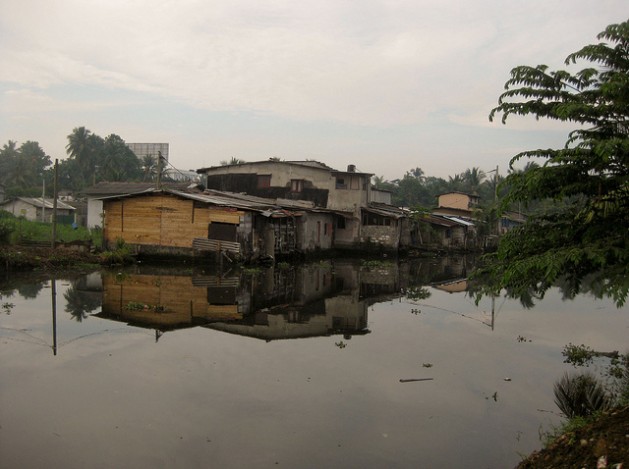 Water, too much and too little of it, will be the biggest climate-induced factor determining Sri Lanka’s future in an era of extreme weather. Credit: Amantha Perera

UDAWALAWE, Sri Lanka, Dec 30 2012 (IPS) - Wild elephants are usually the primary attraction in the remote shrub jungles of Udawalawe, about 180 kilometres southeast of Sri Lanka’s capital Colombo. But this Christmas season, the massive Udawalawe dam stole the limelight from the lumbering beasts.

By the end of December, heavy rains had brought water levels in the Udawalawe reservoir close to spilling point, forcing irrigation engineers to open the sluice gates.

Despite these efforts, the massive tank continued to spill over, creating a gigantic flood downstream.

People drove in cars, vans, motorcycles, lorries and even bullock carts to witness the spectacle, which was but a minor footnote compared to the impact of the rains elsewhere in this South Asian island nation.

But someone should have expected the rains, based on the extreme weather events that ripped through the country in 2012, forcing Sri Lankans to come face to face with the disastrous impact of changing climate patterns. The end-of-year torrential rains were not the first time the country experienced unexpected floods, nor will it be the last, experts say.

In the first week of November, sudden rains brought on by Cyclone Nisha left over 200,000 people stranded, 15,000 displaced and nine dead. Over 5,000 homes were also destroyed.

Just prior to the November rains, much of the country had been hit by a 10-month-long drought. Close to a million people were affected, according to the International Federation of Red Cross Societies (IFRC), which recently launched a million-dollar international appeal to assist over 125,000 drought-affected people in Sri Lanka.

The drought destroyed 23 percent of the secondary rice harvest, the Ministry of Agriculture said, putting thousands of farmers at risk of starvation.

“More and more people are being forced to think about climate change and evaluate the impact,” Bob McKerrow, head of the IFRC delegation in Sri Lanka, told IPS.

The Northwestern Puttalam District provides a salient example of the extent of weather fluctuations within a matter of months.

During the December floods, parts of the district were submerged under eight feet of water, forcing 36,000 displaced persons to take shelter in over 60 government camps.

Yet just three months prior to the floods, people in the district were walking miles to dig holes in dried-out tank beds and wait overnight to collect the water.

“Water, the lack of it and too much of it, will be the biggest climate induced (factor) determining the way Sri Lankans live in the future,” W L Sumathipala, former head of the climate change unit of the ministry of environment, told IPS.

And though the signs are evident for all to see, hardly any action is being taken to mitigate the likelihood of future intense weather events.

The Meteorological Department still lacks the capacity to provide detailed forecasts, leaving the public to decipher cryptic notices, like the one that appeared on Dec. 20 stating, “There will be showers or thundershowers at times in the Northern, Eastern, North Central and Uva provinces and in the eastern slopes of the central hills and in the Hambantota district. Fairly heavy falls are also expected in some places.

“Showers or thundershowers will develop (in) several places elsewhere, particularly during the afternoon or evening,” the bulletin concluded.

Even officials at the DMC bemoaned the fact that they were not given detailed accounts of how much rain to expect, which would have enabled them to issue more precise warnings.

S H Kariyawasam, director general of the Meteorological Department, told IPS that the department lacked the technical and personnel capacity to give out such forecasts.

Erratic weather also continues to plague the vital paddy sector. In 2011, the country lost close to 17 percent of the total harvest to floods, followed by a bumper harvest the year after. The 2012 drought ignited fears of another lost crop, but heavy rains this month are forcing experts to rethink their forecasts yet again.

Farmers have yet to change their practices to accommodate the volatile weather, and paddy cultivation continues to follow the traditional cycle of planting and harvesting according to the two monsoons.

“Maybe if this trend continues we will have to think of adjusting the crop cycles,” said L Rupasena, additional secretary at the government-run Hector Kobbekaduwa Agrarian Training Research Institute.

According to McKerrow, the nature of incremental climate change over decades, and sometimes generations, means people pay less attention to the patterns that they should. “Slow moving disasters are the hardest for people to understand,” he said.

But for those who gathered in close proximity to the gushing torrents under the Udawalawe dam, there was no doubt about the need for urgent action.