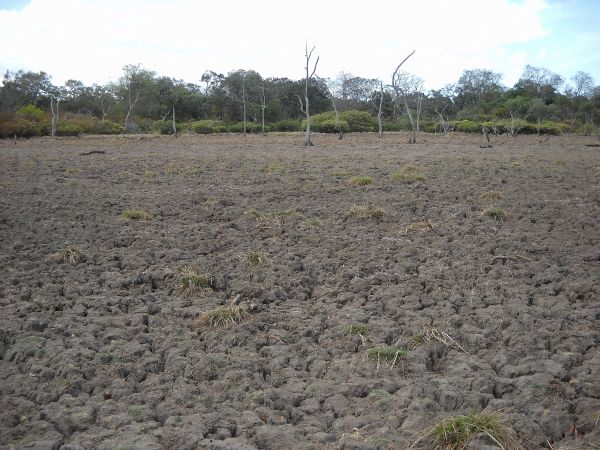 PUTTALAM, Sri Lanka , Aug 29 2012 (IPS) - It is a time of extreme heat and anxiety in Sri Lanka. Even the rains last week felt like a sudden burst of cold water on the smouldering asbestos sheets on most Sri Lankan household roofs, creating a blast of cold air before the heat returns once the rains end.

In some regions, like the north-central Pollonaruwa District, temperatures have been hitting highs in the region of 35 Celsius at uncomfortably regular intervals between July and mid-August.

“Temperatures have been rising for some time now, and will continue to do so,” warned Malika Wimalasooriya, the head of the Climate Change Unit at the Meteorological Department. The expert said that the rise is not spectacular or rapid, but that people have been noticing the effect of late because of the lack of rain.

The traditional southwest monsoon has been delayed by at least a month, and the first rains have begun only in the last fortnight. According to the Climate Change Unit at the Ministry of Environment, temperatures have risen by around 0.45 degrees Celsius in the last two decades.

Already this year’s dry spell is creating havoc. Seventy-two areas in the country, including almost all of the capital Colombo, with high levels of electricity usage have been slapped with a daily three-hour power cut. The interruption is due to the breakdown of a coal power plant, but the national grid has been under tremendous stress due to the depletion of hydropower production capacity.

Usually hydropower meets around 40 percent of Sri Lanka’s annual electricity demand. This has gone up to even 55 percent in years with exceptionally high rains, such as 2011. But the drought has left the water reserves in the reservoirs painfully low. Hydropower generation capacity was at 17 percent during the third week of August, according to the Ministry of Power and Energy.

Sri Lanka’s power generation capacity just about meets national demand and does not have any readily available source to supplement it if there are breakdowns or large capacity losses, said Thilak Siyambalapitiya, a former engineer with the Ceylon Electricity Board who now works as an independent energy consultant.

“When there are large losses to the generation capacity, you have to cut down usage somehow, the power cuts are doing that,” Siyambalapitiya said.

The blackouts may be an inconvenience in urban areas, but in the agro-rich dry zone, the fear is that the lack of rain will devastate crops. There are already signs that it has. The United Nations reported that over 150,000 acres of rice paddy and other vegetable land in the country’s north are under threat. Tens of thousands of acres of paddy land are also at risk in the Pollonaruwa and Anuradhapura Districts, two of the main production regions.

The burden on the national economy is also rising. While more and more foreign exchange is spent on oil for thermal power generation, this does not augur well for a currency that has been under pressure. So far this year, the Sri Lankan currency has lost 17 percent against the dollar.

“If hydropower generation was up, then the sums spent on thermal could have been saved, at least partially; now there is no option but to spend,” Siyambalapitiya said. Sri Lanka subsidises thermal power by around 20 percent even though it is at least four times more expensive than hydropower.

The government has also set aside around 27 million dollars to assist affected farmers. The assistance will come in the form of drought relief, cash for work programmes, fertiliser and seeds.

For farmers who are at a quandary as to what to do, the announcement of relief is a godsend. “I really have no idea what to do, whether to plant or not to,” said G Somadasa, a vegetable farmer from Sri Lanka’s southeastern Tanamallvilla region.

He is among the tens of thousands of Sri Lankan farmers who depend on irrigation water, released by government officials for their crops. “We have to wait till the water is released or at least a date is announced for the release, to start the planting,” Somadasa told IPS. One big fear he has is that if he waits too long, he will miss the normal planting dates and crop cycle, and will not have a good harvest.

There are thousands of farmers like Somadasa in Sri Lanka who are critically dependent on water but have virtually no knowledge of weather patterns or water conservation.

The Central Bank’s last annual report warned that the livelihoods of 1.8 million people depend on agriculture, which means that between eight and nine percent of the population of 20 million stand to be affected by extreme weather events.

“This is the reality of climate change: heavy rains followed by drought. We have to plan for such extremes in the future,” said Kusum Athukorala who heads the non-governmental bodies the Network of Women Water Professionals, Sri Lanka (NetWwater) and the Women for Water Partnership that advocate water conservation and efficient use.

Her words were echoed by W L Sumpthipala, the former head of the Environment Ministry’s climate change unit. “Water or lack of it will be the biggest manifestation of changing climate patterns,” he said.