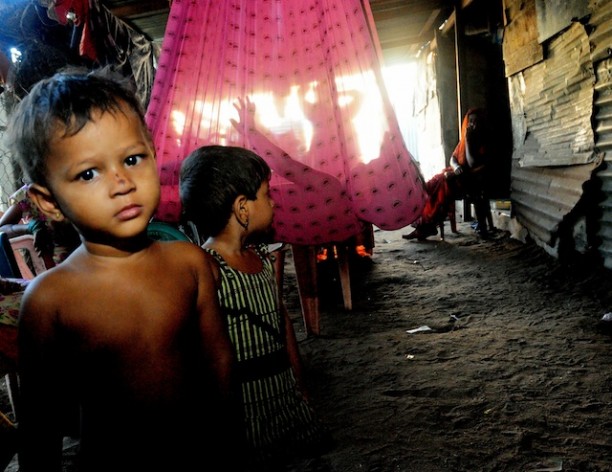 According to the World Bank, the urban poor in Sri Lanka are most vulnerable to the impacts of climate change. Credit: Amantha Perera/IPS

PANSALGOLLA, Sri Lanka, Oct 28 2012 (IPS) - The old adage ‘nature is the great equaliser’ no longer holds true in countries like Sri Lanka, where the poor bear the brunt of extreme weather events.

Gamhevage Dayananda, a farmer from the remote village of Pansalgolla in Sri Lanka’s north-central Polonnaruwa district, can attest to this reality, as he and his fellow farmers struggle to survive alternating periods of drought and flooding.

Unexpectedly heavy rains in February 2011 forced engineers to open the sluice gates of large irrigation tanks in the area, flooding hectare upon hectare of farmland, including Dayananda’s modest plot.

He lost his entire rice harvest, no small setback for his family of four who depend on this crop for their very survival.

This year, Dayananda found himself facing another crisis when drought destroyed his crop and put him at risk of falling deeper into debt.

“One season it’s all rain, next it’s all sun,” Dayananda told IPS. “There is nothing in moderation, it is all in extremes.”

The trend of extreme weather events alternating year after year is unlikely to change, according to W L Sumathipala, former head of the climate change unit at the Ministry of Environment, adding that Sri Lanka is at the receiving end of changing climate patterns.

Last year’s annual report for the United Nations Central Emergency Response Fund (CERF) noted, “Climate-related emergencies, such as those linked to drought, floods, and storms, expose the poor and most vulnerable to hazards that have lasting consequences for the health, livelihoods, and well-being of people who have the least capacity to cope with and mitigate the effects of natural disasters.”

Currently about 8.9 percent of this South Asian island nation’s 21 million people live below the poverty line.

Of these, according to Abha Joshi-Ghani, head of the World Bank’s Urban Development and Local Government Unit, “the poor in urban areas are likely to be affected more by the changing climate patterns. They are the most vulnerable because they live in sensitive areas, on precarious land where no one else will settle.”

The British-based charity Homeless International estimates that 12 percent of Sri Lanka’s urban population of about three million can be found in slums.

Defence and Urban Development Secretary Gotabaya Rajapaksa was recently quoted as saying that shanty dwellers in the capital Colombo can be found “mostly on government lands”.

“Many of them are on the reservations set aside around the lakes, canals, roadways, and railway tracks,” he added.

The biggest threat to this population is the flash flood. Since 2007, the nation’s capital – along with other parts of the western region – has already been submerged more than two dozen times.

Some areas end up under water after just 30 minutes of heavy rain, as was experienced during the third week of October.

This situation can be traced in part to the capital’s compromised drainage capacity. But increasingly heavy downpours over the years have made matters worse, particularly since there are no signs this trend will let up anytime soon.

In its Second National Communication on Climate Change 2012, the environment ministry says that Colombo and the rest of the western plains can only expect more wet days ahead, with “intense” periods of rain.

By contrast, rice farmers are probably going to have to deal with long dry spells for some time to come. According to the environment ministry, the agrarian areas in parts of the east and northern provinces, including Polonnaruwa, will not only get less rain than they need, they will also experience higher temperatures.

The Central Bank estimates that a 0.5-degree Celsius rise in temperatures could reduce rice yields by around five percent.

Thus it should come as no surprise that an Asian Development Bank report last year identified climate change as the “greatest threat to food security”.

“The combined effects of this triumvirate – water, food, and energy insecurity – will render poorer sections of society extremely vulnerable unless social security for this sector is beefed up as part of the climate change mitigation programme.”

Last April, farmers in Polonnaruwa took to the streets after irrigation engineers stopped providing water because of the drought. At the time, the farmers said more than 16,000 hectares of paddy fields feeding off the Parakarama Samudarya irrigation tank were already in danger of going completely dry.

After being hit by floods in the early part of 2011, which destroyed over 16,000 hectares of paddy fields and roughly ten percent of the early harvest, rice farmers in the north and north-central regions are now facing the opposite end of that spectrum.

Experts have estimated that close to 29 percent of an estimated harvest of 1.1 million metric tones will be lost, while 76,000 hectares, or 19 percent of the planted crop has already been destroyed.

“Preliminary findings indicate substantial livelihood impact on a broad spectrum of the population and a deterioration of food security,” according to the WFP Global Food Security Update for October.

Muttukrishna Sarvananthan, a prominent economist, believes that unemployment could be as high as 20 percent in some parts of the Northern Province, though no government data exists to support this view.

*This story was produced as part of IPS Asia-Pacific’s ‘Climate Change: A Reporting Lens from Asia’ series.