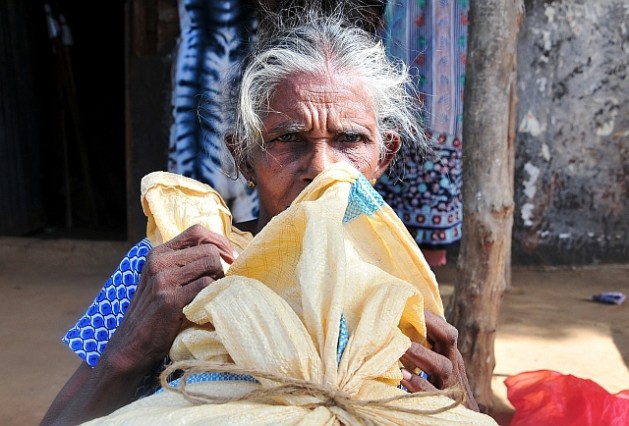 The poor in Sri Lanka are not equipped to meet price shocks.

COLOMBO, Feb 23 2012 (IPS) - First the government devalued the Sri Lankan rupee by three percent in November. Then interest rates were hiked. And to cap that U.S. sanctions hit Iran, which meets 90 percent of this country’s oil needs.

Earlier this month, the government limited its intervention in the foreign exchange market where it had been selling billions of dollars to prop up the local currency. February began with the rupee trading at 109 per dollar, but two weeks into the month and it had slipped to 120 a dollar.

A cascading effect followed. On Feb. 10, the price of petrol went up by 8.7 percent, diesel by 36 percent and kerosene by 49 percent. Soon electricity became 40 percent more expensive as the list of upward price revisions grew longer.

Prices of bread and other bakery products are likely to go up unless producers are given subsidies. Gas price hikes are almost inevitable. Even doctors working in government hospitals have sought an increase in fuel allowance, threatening to go on strike.

There are other signs that the price hikes are not going down well. Opposition political parties and affiliated trade unions have begun to stage protests and had to be dealt with by police using teargas and batons.

One protester, a fisher from the north-western town of Chilaw, was killed on Feb. 15 when police opened fire on a demonstration demanding fuel subsidies for fishers.

The protests will continue and become a daily routine, vowed the People’s Liberation Front opposition party and its affiliated union.

A total of 11 trade unions, represented on the National Labor Advisory Council, have requested the labour ministry to order an increase in salaries of workers, especially those in the private sector.

So far, the government has taken the plea that the price hikes were inevitable given rising world prices of crude oil, but it has promised subsidies for those directly affected such as fishers, taxi operators and those in the transport sector.

“It is a combination of factors working together,” Srimal Abeyratne, an academic attached to the department of economics at the Colombo University, told IPS. “Prices will go up more and living standards will drop accordingly.”

Abeyratne said people will try to cut down on spending wherever they can, in order to meet vital expenses.

Chanuka Wattegama, an independent policy researcher, told IPS that the manner in which price revisions are being ordered suggests an intention on the part of the government to bring down consumption.

“The fact that the price of kerosene, a commodity used largely by the poor, was raised by nearly 50 percent indicates that the government expects a fall in demand across all sections, not just among the rich or middle class,” he said.

Wattegama warns that the poorest will be worst hit. “The poor will definitely suffer. Those who are just above the poverty line now will fall below it. While the richer sections can absorb the shock to some extent, the poorer cannot.”

Ramasamy Ramakrishnan, 47, who works on a tea estate in the Nuwera Eliya district expects to face the shocks that Wattegama predicts.

This father of five makes do with less than 130 dollars a month, the combined income that he and his wife earn on the estate, plus the odd jobs that come his way.

“I don’t know what to do, where to cut from. Already we were finding it hard to make ends meet. There have been no savings for over two years,” Ramakrishnan said.

Around five percent of Sri Lanka’s population of little over 20 million is from the estate sector, considered among the poorest. At least 11 percent from that population live below the official poverty line, according to the government’s census and statistics department.

The urban poor are only too aware of the tough times ahead. “What to do? The choice is between starving or cutting down on other expenses,” Manel Darmalatha, a widow with three children, said.

Darmalatha makes less than Ramakrishanan, around 90 dollars. “I am not sure what I am going to do, maybe ask my eldest (daughter) to work, it will be hard,” she said.

As Wattegama pointed out, the country’s richest are unlikely to suffer as badly.

A recent study by the Colombo-based research body, the Centre for Poverty Analysis (CEPA), said that the richest 10 percent in the country were spending on average close to 1,200 dollars per household per month, while the poorest 10 percent’s monthly expense were less than 55 dollars.

CEPA also said that the top 20 percent earns 54 percent of the country’s income while the bottom 20 percent accounts for less than five percent of earnings.

Wattegama told IPS that because of a combination of factors, the price hikes were felt sharply and warned that the country’s economic woes called for drastic action.

“The gap (in incomes) I see as the (result of) lack of initiatives to take the masses out of poverty and giving them livelihood options, rather than providing social welfare,” he said.

Abeyratne sees mismanagement of public enterprises that drain precious funds as another cause for the developing crisis.

“There is large mismanagement and waste. But the losses have to be borne either by the taxpayers or the consumers,” he said.

The economist told IPS that some economic shocks like those caused by the rise in international prices are hard to avoid. “But what the policy makers can do is to adhere to better fiscal management and target relief measures more diligently.”