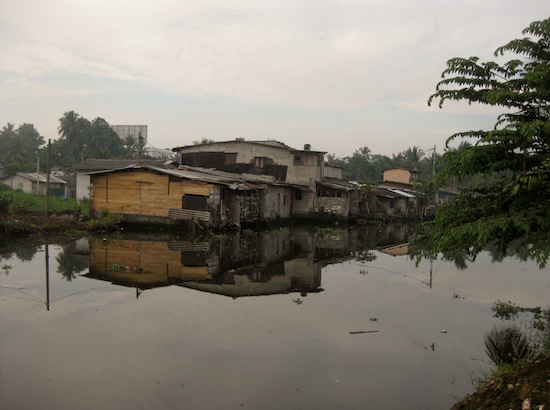 In some parts of Colombo, informal housing structures, or slums, are built right on waterways. Credit: Amantha Perera/IPS

COLOMBO, Apr 4 2012 (IPS) - Sri Lanka’s capital city Colombo, the vibrant economic and administrative heart of the bustling island nation, is rapidly turning into a city of slums. Home to over 30 percent of the country’s population, one in every two people living in the Greater Colombo Area is a slum dweller.

Sadly, Colombo’s bulging urban population is not a rarity in South Asia, where most of the region’s major metropolises are scrambling to stitch up their bursting seams.

Dhaka, the Bangladeshi capital, is home to 34 percent of the country’s population and is the fastest growing city in Asia – around 40 percent of those living in Dhaka are slum dwellers. A quarter of Nepal’s population lives in cities, while 36 percent of Pakistan’s population is now concentrated in urban centres. In India 93 million people are estimated to be living in slums; fully half the population of the capital, New Delhi, lives in slums, while the figure could be as high as 60 percent in glittering Mumbai.

Ming Zhang, the World Bank sector manager for Urban Water and Disaster Management for South Asia, predicted that the urban population in South Asia would double in the next 25 years. Already one in every four persons is categorised under ‘informal population’ or living in shanties or slums in the urban areas of the region, Zhang warned.

The expansions are so rapid that in Dhaka, according to Nazrul Islam, chairman of the Centre for Urban Studies in Dhaka, one of the most profitable businesses nowadays is developing and renting out ‘slums’ that stand on stilts near waterways.

And when unannounced floods come, like they did in Colombo in November 2010 and May last year, it is the low-lying areas where most of the slums are located that go under first. A similar situation was experienced in Bangladesh in July last year.

Regional experts and those from the World Bank agree that most of the problems faced by the cities are man-made, primarily due to lack of proper planning.

“If we thought about proper urban planning, institutional coherence and community participation, we would be able to address a big chunk of this (problem),” Abha Joshi-Ghani, the World Bank’s Sector Manager for Finance Economics and Urban Planning, told IPS.

Colombo, particularly, knows the ramifications of haphazard expansion. When the rains come down in buckets, even for short periods, parts of Colombo go under in double-quick time.

Gotabaya Rajapaksa, secretary to the Ministry of Urban Development and Defense, told the World Bank workshop that the flooding is mainly due to informal housing structures coming up on or near water retention areas, canals and other climate-sensitive spots.

In some parts of Colombo, like along the sections of the Hamilton Canal and connecting waterways north of the city, the structures are not near but actually on the water. Weerasooriya said that rain patterns affected by climate change – resulting in shorter rainy days with intense downpours – have exacerbated the problem.

Joshi-Ghani told IPS that cities like Colombo sitting near the coast now face the added risk of coastal erosion.

“In South Asia we have a large number of coastal cities threatened with inundation,” she said.

Drinking water is also becoming a major issue in other regional cities like Dhaka. Islam told IPS that overuse has already made the water supply from two of the four rivers that feed the city unreliable, because “they are running dry,” he said.

“Most of these places have seen unplanned development take place for decades, they need to change that,” Rutu Dave, a climate change expert at the Washington-based World Bank Institute, told IPS.

Her colleague Joshi-Ghani added urban centres have to fix the problem of overuse of limited resources. “We are depleting our resources by inefficient and indiscriminate use of resources.”

Secretary Rajapaksa told the World Bank workshop that authorities have launched a massive programme to relocate 70,000 families living under poor conditions in Colombo and to clear blocked waterways. “Providing proper housing for the under-served settlements is a significant problem for town planners and architects,” Rajapaksa said.

With space at a premium, the project envisions resettling slum dwellers in high-rise buildings.

Joshi-Ghani told IPS that any relocation has to take into consideration the incomes and lifestyles of those affected, which, if disrupted, could turn the solution itself turns into a problem. “Many think that cities make people poor, when in fact cities attract the poor who think they can make a better living (there),” she said.

Dave told IPS that awareness was growing among authorities as well as ordinary people on the dangers faced by unplanned urban development. “Some of the best awareness campaigns have been at schools. Children can be drivers of change,” she said.

But as long as city planners lack the political will, at national and local levels, to go head with strong decisions, cities like Colombo, Dhaka and others in the region will have to deal with more chaos as nature’s fury increasingly joins hands with man’s ignorance.

“The scary thing is that natural disasters don’t honour geographical boundaries, they hurt the poor most,” said Jesse Robredo, secretary of the Department of Interior and Local Governments in the Philippines, who travelled to Colombo to advise his South Asian colleagues on the issue.