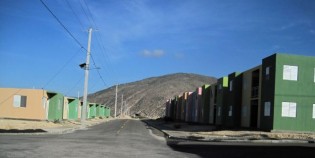 By Correspondents
Reforestation and soil conservation programmes costing many thousands of dollars in this rural community have resulted in hundreds of small ledges built of straw or sacks of earth. In certain areas, the earthworks seem to be lasting, but in others, they are disintegrating.

By Correspondents
A World Bank-funded community development project in Haiti appears to have inadvertantly harmed or even dissolved some of the grassroots organisations it was designed to strengthen.

By Correspondents
Even though a restrictive government decree that blocked reconstruction of downtown Port-au-Prince for almost two years was finally annulled, questions, frustrations and doubts abound about the eventual recovery of Haiti’s economic, cultural and political capital.

By Correspondents
Just months after the Jan. 12, 2010, earthquake killed over 200,000 Haitians and drove another 1.3 million into squalid camps, the Building Back Better Communities (BBBC) project got the green light from the Interim Haiti Reconstruction Commission (IHRC), headed by former U.S. president Bill Clinton and then-Haitian prime minister Jean Max Bellerive.

By Correspondents
The smells and scenes that greet a visitor to this eerily empty collection of over 60 brightly painted homes and buildings verge on the obscene.

Haiti’s “Gold Rush” Promises El Dorado – But for Whom?

By Correspondents
Twenty billion dollars worth of gold, copper and silver hidden in the hills of the hemisphere's poorest country. Investors in North America so convinced of the buried treasure, they have already spent 30 million dollars collecting samples, digging, building mining roads and doing aerial surveys.

By Correspondents
With heads of state from more than 120 nations and tens of thousands of civil society and international development experts gathering for the U.N. Summit on Sustainable Development next week, it is accepted wisdom that rethinking agriculture is one of most critical issues facing this and future generations.

By Correspondents
With a court order to close one of Tajikistan's most popular mosques, President Imomali Rahmon's administration is stepping up its campaign to neutralise both Islam and the last vestiges of any political opposition.

By Correspondents
More than 100 Haitian families now have new housing, thanks to the support of two non-governmental organisations working on reconstruction following the country's devastating 2010 earthquake.
Next Page »
ADVERTISEMENT ADVERTISEMENT