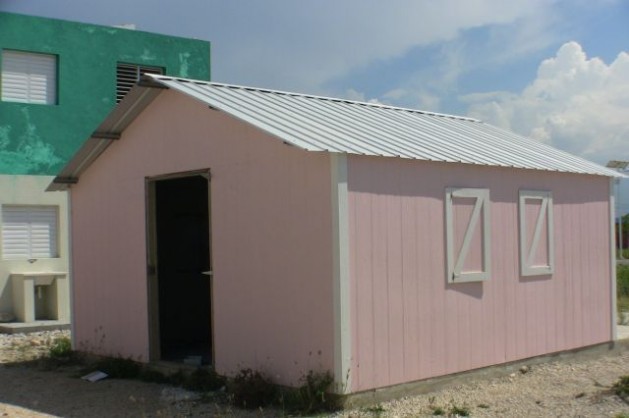 This model home from Perma Shelter, above, has been turned into a communal latrine. Photo: HGW/Milo Milfort

[Read Part One of this story]

The project consisted of an exposition of some 60 model homes for post-earthquake reconstruction, and the building of an “Exemplar Community” for 150 families, planned for former farmland outside the capital Port-au-Prince.

Altogether, the BBBC cost over two million dollars in “reconstruction” funding. Most went for the Expo that was barely visited and whose models homes today sit empty, as well as for the Exemplar Community – a community that was never built.

Another two million was spent by the architectural and construction firms hoping to win valuable housing contracts with the government and NGOs, and also betting their house would be chosen for the Exemplar Community.

Today, a long list of BBBC organisers – including Arcindo Santos of the Inter-American Development Bank, which spent 1.2 million preparing the “expo” site, and former tourism minister Patrick Delatour who coordinated the exposition – call the project “significant”, “a good idea” and “a success”.

And for each of them, it was. Each person and agency accomplished his or her piece of the project, attending conferences, writing reports, inaugurating events. And most of them, and their employees, got paid.

But nobody carried the projects forward, nor does anyone seem to be bothered with them today. Rather than housing earthquake victim families as the government had promised, 14 months later, the 67 model homes are empty.

In his interview with Haiti Grassroots Watch (HGW), even one of the project’s originators – architect and former Haitian government official Leslie Voltaire – admitted the Expo was “a farce”. While calling the Harvard/MIT report produced for the Exemplar Community an “excellent” document, he pointed out that perhaps the plan – his plan – was flawed from the beginning.

Today, Voltaire noted, nobody seems to be in charge. Not the state housing agency, not the housing reconstruction office, not the Ministry of Tourism.

But Voltaire is implicated also, according to a ministry of tourism document. As of March 2011, he was put in charge of “the management and follow-up of the Exemplar Community”.

HGW did its own follow up, getting in touch with seven of the firms, based in Haiti and the United States. Only one was building houses, and it had obtained that contract before the Expo started. All were dismayed with how the project turned out.

“It was a waste of money with no respect for the builders,” Gabriel Rosenberg of GR Construction, a Haitian firm, said in a telephone interview. “We invested about 25,000 dollars. We expected to sell those houses.”

Jim Dooley of New Hampshire, U.S., said he got involved because he “wanted to help”. He and his partners formed the “Ti Kaye” (“Little House”) consortium and invested about 68,000 dollars, he told HGW. “At this point we have not sold one building,” Dooley said.

“We were told that the model would eventually become a protective shelter and home for a caring and needy family,” he added. “We can only hope that that is the future for this little building. We certainly designed it and built it with that foremost in mind.”

Today the Ti Kaye is locked up tight, and empty, while an estimated 369,000 victims still live in squalid camps.

Haitian entrepreneur Winifred Jean Galvan said she and her Mexican partners at Pamacon S.A. spent 27,000 dollars, part of that on customs fees. “We paid something like 30 percent,” she said, even though the 20,000-dollar house was a gift to the government.

Galvan and Pamacon got involved because they wanted to “to provide people with a decent house” and “to make a living doing that”, she said.

Today the little orange home sits empty. The paint is peeling and one wall is cracked.

“They took our money, they took our houses… with no respect for us,” the 58-year-old businesswoman said. “We thought they would call, at least to say if they chose our house or not (for the Exemplar Community). Not even a thank you. Not a goodbye. Nothing.”

HGW asked the Haitian government what was planned for the Expo houses.

“We’re going to sell some and rent some,” Clement Belizaire of the state’s housing reconstruction office told HGW recently. “Some of them will have state services in them. All of those houses will be used.”

But today, just one is occupied by a state agency. The model built by Haitian firm SECOSA now houses a police station.

*Note: Most interviews for this article were conducted in early 2012.