PORT AU PRINCE, May 24 2012 (IPS) - More than 100 Haitian families now have new housing, thanks to the support of two non-governmental organisations working on reconstruction following the country’s devastating 2010 earthquake. 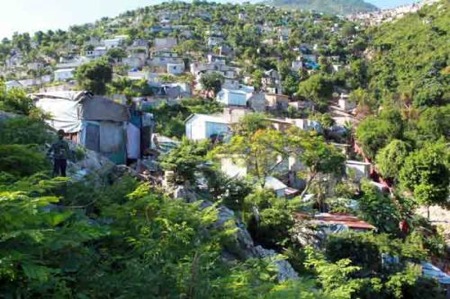 But the circumstances in which the temporary shelters were provided, and the area where they were constructed, raise serious concerns about the role such organisations play in sustainable development.

On a mountainside slope overlooking the capital, 12 by 18-square- metre wooden homes, referred to as transitional shelters (T- shelters), dot land that used to be filled with vegetation, which is significant for a country where less than two percent of the land is forested.

Known locally as Morne l’Hôpital, the area is covered by a 1963 law and a 1986 decree which stipulate that the zone is specially protected. The Organism for the Oversight and Planning for Morne l’Hôpital (OSAMH) was set up by the government for just this purpose.

The American Red Cross and the United States government funded two of the international agencies which built homes on Morne L’Hôpital, respectively, the French-based ACTED and Irish-based GOAL. These humanitarian non-governmental agencies (NGOs) claim that they did everything by the book.

Others implicated claim differently, including the local authority for the specific area, Raoul Pierre-Louis and OSAMH director Montes Michel. In the end, it is an irresolvable he-said, she-said battle.

What is indisputable is the law which, published in the official government journal on Nov. 6, 1986, states: “Residential construction is not permitted unless permission is obtained from the relevant agencies……It is not permitted to graze cows or goats; to cut wood or bush, to undertake any kind of planting that involves hoeing…or do any kind of burning for whatever reason.”

But plots were cleared, trees cut, and foundations prepared for at least 100 of the shelters, if not more.

ACTED director Marianna Franco said that when the idea for T-shelters came along, there was no urban development plan for Port-au-Prince or the surrounding metropolitan area. “There still isn’t, so we built T- shelters where we could find space,” she said, explaining that every home was built on land where the recipient held a land title.

Pierre-Louis said that the NGOs signed papers that said “shelter”, not house. “In any case,” he explained, “they are temporary. They need to be moved.”

But that seems unlikely. All over the country, T-shelter recipients are busy converting their tiny wooden boxes into permanent homes with concrete walls, extra rooms and other additions.

“When you build a temporary shelter for someone, it is very likely that it will become permanent. We have seen people doing the transformation,” a GOAL agent admitted to Pierre-Louis during a telephone call made in the presence of a member of Haiti Grassroots Watch’s (HGW) investigative team. “Therefore, we said to ourselves, ‘Let’s see how we can help these people turn their temporary shelters into permanent homes.'”

OSAMH director Michel said good intentions to control the situation can’t compete with a lack of authority or human and financial resources.

“The state can’t really intervene (at Morne l’Hôpital) without the accompaniment of the police and representatives of the justice system,” Michel said. “It’s written in the law,”

But GOAL, which built about 1,000 T-Shelters in the Turgeau area, and at least 100 in the protected area of Morne l’Hôpital, claims it worked with Pierre-Louis as well as with an OSAMH agent, Canez Dellande, who oversaw the NGO’s work.

Michel said this was a “total lie”.

“We never delegated anyone to work with them,” he said. “We could never send an engineer out to set the limits if the NGO didn’t first give us a plan that outlined their activity.”

Plan or no plan, there’s no disputing the fragility of the area, and even one of the funders recognised this. Immediately after the earthquake, the U.S. Agency for International Development (USAID) published a document announcing that the catastrophe had created an opportunity to protect the zone.

“The steeply sloped Morne l’Hôpital benefits, at least theoretically, from its special legal status as a ‘public utility,’ a protected area off limits to construction,” notes the document, which also says USAID partners with OSAMH. “The post-earthquake period provides an unprecedented opportunity to assert control over Morne l’Hôpital as a legally protected zone and prevent new housing construction on fragile slopes.”

HGW requested, without success, an interview with USAID’s Haiti office to understand why one US agency financed the deforestation of Morne l’Hôpital while another advocated for its protection. No one from USAID, including the director of the region in El Salvador, responded to HGW’s request.

Michel admits the government’s culpability in failing to protect Morne l’Hôpital, including the ongoing construction by the well-to- do, but says some NGOs have acted irresponsibly.

“We can’t stop the NGOs from doing work inside the 2,000 hectares,” he said. “But they should follow the law. If we let NGOs come, independent of OSAMH, and help increase the slums on Morne l’Hôpital, well, that is very bad for the country.”

Pierre-Louis was even more cynical, saying: “The ‘slumification’ of Port-au-Prince has just begun.”

This report was made possible with the support of the Fund for Investigative Journalism in Haiti.