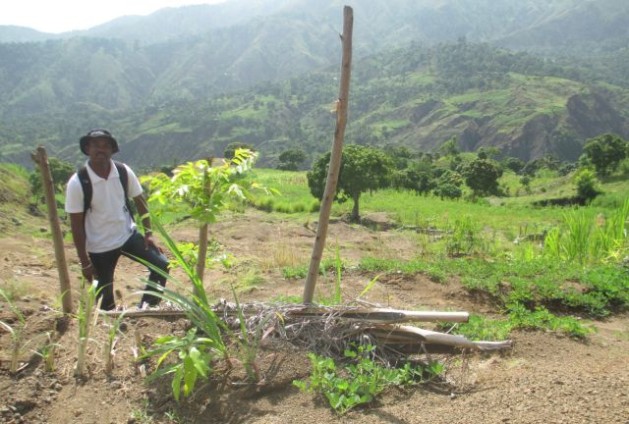 Agronomist Ludson Lafontant looking at one of the recently constructed ledges during a visit to Doucet in August 2013. It contains a young mango tree plant, a grass plant, and peanut plants. Photo: HGW/Milo Milfort

Doucet, Petit-Goâve, HAITI, Nov 29 2013 - Reforestation and soil conservation programmes costing many thousands of dollars in this rural community have resulted in hundreds of small ledges built of straw or sacks of earth. In certain areas, the earthworks seem to be lasting, but in others, they are disintegrating.

The construction and destruction of the anti-erosion ledges – all made with foreign development and humanitarian money – offer an example of how at least some of Haiti’s reforestation projects turn out.

No matter what promises were made, a farmer will always be concerned with the immediate need of feeding and clothing his or her family first.

In the years since the 2010 earthquake, the 11th and 12th communal sections of Petit-Goâve, located 60 kilometres southwest of the capital, have hosted several soil conservation and agricultural programmes with budgets in the tens and even hundreds of thousands.

The steep slopes around the river “are very vulnerable to water erosion and mudslides,” MKOZE explained in a report on one project that had a budget of 91,534 dollars. “During rainy season, the waters from the Ladigue River dump a lot of sediment and rocks at the river’s mouth, destroying fields and causing homes to flood. Sometimes harvests, homes, animals and even human lives are lost.”

In the Petit-Goâve region, deforestation started about a half-century ago, according to many residents. It began with the devastating 1963 Hurricane Flora, which caused great damage and over 5,000 deaths in Haiti’s western and southern regions.

Molière Jean Félix, 62, remembers. “There were a lot of mango trees at the top of this mountain. We grew corn and rice. Now you can’t even plant Congo beans there,” recalled the farmer.

Haiti has less than three percent tree cover, down from about 60 percent a century ago, and perhaps 80 percent when Christopher Columbus first disembarked. In Haiti, trees are cut down primarily for fuel.

Most energy consumed in the country for cooking, industrial bakeries and dry cleaning – in fact, 75 percent of all energy used comes from wood and charcoal, according to government figures.

Missteps to Learn From

A few observers noted some bad choices made in the projects. For example, although Louis Calixte worked for AAA as a technician, he thinks the structures will not last.

“Some of the structures are good, but others are not good because of the kind of tree they planted. You can’t just plant a mango any old place. You have to plant it in a certain environment, where it will flourish. The same goes for eucalyptus. You can’t put it in a place meant to produce food,” Calixte explained.

After visiting many of the hillsides, agronomist Ludson Lafontant noted that some of the the techniques used offer advantages. For example, the dried grass used for some of the ledges will eventually decompose and serve as compost for weeds. However, the agronomist agreed that eucalyptus is not the best choice for reforestation.

“All plants use water,” he said. “But these kinds of plants – eucalyptus and also neem – I would not put them near rivers or wells or farmers’ fields. They suck up all the water around them.”

Félix sees tree-cutting almost every day. “Today, young people don’t have any way to make a living. They don’t produce coffee, they don’t raise pigs. So, they cut down trees in order to send their children to school,” he said.

In Doucet, as well as other parts of Haiti, foreign organisations often fund projects where local residents overseen by technicians are paid 200 to 300 gourdes a day (4.65-6.98 dollars) to build ledges made of sacks of dirt, dried reeds and wattle. The ledges are then planted with tree seedlings.

In addition to assisting with reforestation, development organisations also see the projects – known as “Cash for Work” (CFW) in English – as a kind of post-disaster emergency income programme.

“[CFW] helps us hire a lot of families and assures that they get a minimal revenue. This provides immediate assistance and is therefore a real advantage,” AAA’s Beate Maas told Haiti Grassroots Watch (HGW).

All around Doucet, many hills are decorated with hundreds of the new little ledges holding seedlings of fruit or eucalyptus trees. But there are many others where the ledges are disintegrating: mud is spilling out, and the saplings are dead or dying.

Farmers have planted peanuts, peas and other crops around the structures. In a few months, the hillsides will be as naked as they were before the reforestation project.

Ilomène Tataille is a mother, a landowner and a member of one of the voluntary committees set up to keep an eye on the ledges and the new plants, to assure that animals don’t eat them and to make sure the ledges are drained after each rainfall. Another task, she explained, is to make sure farmers don’t plant anything on the eroding slopes, and especially not peanuts, a popular crop in the region.

According to Tataille, even though the CFW workers and landowners all agreed at first not to disturb the hillsides, it is almost impossible to stop people from farming. Even she breaks her promise.

“Yes, I plant there also. We live in a very dry region. We can only farm peanuts. That is our profession. Sorry, but we don’t have any other job,” she said.

Tataille noted that another problem is the fact that landowners lease out their land, so even if they have made promises to AAA and MKOZE, they can’t force their tenants to follow suit.

Staff who work on the projects are aware of the vicious-circle element.

Agronomist Esther Paynis was a consultant to AAA for a project carried out with MKOZE between September 2012 and August 2013.

“We told people not to plant peanuts and other crops that involve digging into the earth, like yam and sweet potato. In the training sessions we held, everyone promised to respect those principles,” Paynis told HGW in a Sep. 30 email.

“If we give them advice that they later ignore, that’s not our fault. We told them the disadvantages of planting peanuts and how that could lead to the total degradation of the zone.”

During a visit in August 2013, journalists saw many young peanut plants on a number of hillsides near the ledges. Two months later, in October, many recently made structures on those same hillsides were in various states of disintegration. Many had been destroyed and tree saplings and other plants were dead, either drowned or buried by earth, both the result of the lack of maintenance.

One reason might be because the committees are voluntary.

“The committees don’t have any support. Some people agree to work for free, but others do not,” Junior Joseph, a member of a local peasant association, explained. “That’s when the structures deteriorate.”

In order to get an independent opinion, HGW consulted an agronomist who had not worked on the project. Agronomist Ludson Lafontant agreed with some of the criticism voiced by local farmers.

Reforestation is necessary but failure to implicate local farmers is a big problem, he said. No matter what promises were made, a farmer will always be concerned with the immediate need of feeding and clothing his or her family first.

During a visit in August 2013, Lafontant said he feared the reforestation project would be another example of wasted money, of the Haitian proverb “Lave men siyè a tè,” which means “wash your hands, dry them on the ground.”

But Lafontant also criticised the population and the government.

“I always say we ought to love ourselves more than others love us. In other words, the non-governmental organisations come here, they write projects, they look for the money and they do the project,” he said.

“The money has to be justified so they can be proud to say they have worked on a X number of hectares, built contours on a Y square metres of land and given Z number of people jobs. That’s how they justify their money. But whose problem is it? Whose country is it? It’s ours, here in our home. We need to become conscious of that.”