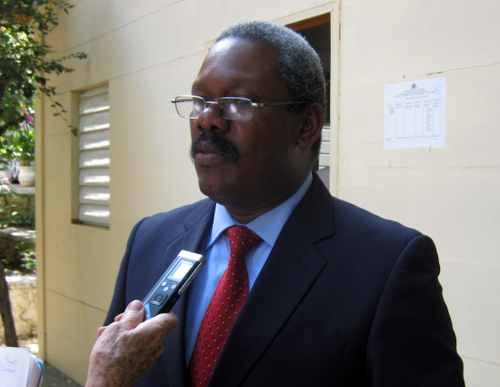 The country launched a master plan for reforestation and land management in January to begin to tackle these vulnerabilities, Haitian Environment Minister Jean François Thomas explained to IPS.

“Because of its morphogeological characteristics, our country is subject to abrupt changes that make it very fragile. The fact that it is an island makes it even weaker,” said Thomas, who was named to his post in January.

“The most serious problem is the massive deforestation, which creates a situation in which any storm causes severe flooding,” he said before describing the extent of the plan, which has been strengthened by the declaration of 2013 as the Year of the Environment in Haiti.

Thomas spoke with IPS in the Haitian capital. Excerpts of the interview follow:

Q: What does Haiti’s new strategy to confront the climate crisis consist of?

A: The first line of action is environmental education, in which we will work together with the education ministry. We want to take this issue to all of the primary and secondary schools in the country, so that young people feel that they are involved in the process.

We believe that with a good awareness-raising and educational programme we could bring about a change, so that people behave in a less environmentally aggressive manner.

The second line of action is reforestation. Sadly, we have less than two percent forest cover. If we continue on like this, within a short time it will take just an hour of rain to cause a catastrophe.

We must turn this situation around, and with the plans that we are putting into practice, we hope to increase forest cover to 4.5 or 5 percent in the next three years.

We are going to carry out this massive reforestation project with the help of countries like the Dominican Republic, Cuba, Mexico and many others that feel involved in this. Binational accords are in place for implementing it and making a difference.

Q: Do those plans include the design of alternatives in order for families to have access to fuel other than charcoal and firewood?

A: Exactly. The third line of action is the search for alternatives. We can’t punish people and we can’t say we are going to change things without offering them other possibilities.

Many studies have already been carried out on new techniques and energy sources, including improved cookstoves, the development of dry forests and numerous technologies that could help ease the pressure on our forest resources.

Q: And what is the fourth line of action?

So we have to move forward with the legislation that we already have, and with all of the country’s strength, in the environmental monitoring process.

With these four lines of action, we can make a difference.

Q: In terms of renewable energy, what specific sources are you thinking of?

A: For example, establishing solar energy production centres…Solar stoves are also being manufactured. All of this is part of an effort to support local communities and ease pressure on our natural resources.

Q: Is Haiti in a position to include climate change adaptation in its economic development plans?

A: We recognise that Haiti is in an emergency situation, but it still has the inescapable obligation to develop adaptation mechanisms. (Climate change) is no longer science fiction; it is a reality that we are experiencing. There is great concern about this phenomenon and the need for adaptation in our country.

Strategies to teach communities to adapt to these changes are already being carried out.

Q: How will the creation of the La Selle biosphere reserve, declared in February by UNESCO (the United Nations Educational, Scientific and Cultural Organisation), contribute to conservation?

A: The biosphere reserve, Haiti’s first, will permit improved integration of people and the environment. The idea is not just to protect natural resources, but also to teach people to coexist with the environment, seeking ways to improve their living conditions without hurting their surroundings. It will provide many sources of jobs as well.

It is also an interesting scientific process. But the most important thing is that people there will be taught to live in, respect and judiciously make use of the environment in which they live and on which they depend.