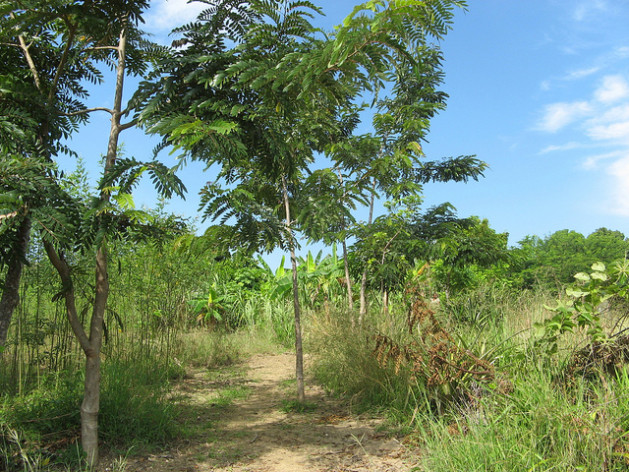 With a population of 10 million and Gross Domestic Product (GDP) of 7.8 billion dollars, Haiti, the Western Hemisphere’s poorest country, has been crippled by environmental degradation for several years.

“There is already a firm foundation to build on in some areas where present and past forestry and agroforestry projects had been implemented." -- Tony Rinaudo

But there is a flicker of hope for the country and its neighbour, Dominican Republic (DR), with which it shares the island of Hispaniola.

Inspired by the success of its Humbo forestry project in Ethiopia, developed under the Kyoto Protocol’s Clean Development Mechanism (CDM), World Vision Australia has just completed a scoping mission to both countries, to examine the potential for natural regeneration of forests through “Farmer Managed Natural Regeneration” (FMNR).

“Healthy lives for children and their families are underpinned by a healthy environment and so more and more we’ve been looking at how we can help communities to build sustainable environments, and particularly in the face of climate change this is becoming increasingly important,” Timothy Morris, World Vision’s business unit manager, food security and climate change, told IPS on the sidelines of the United Nations climate change conference underway here at the national stadium of Poland.

The CDM allows for reforestation projects to earn carbon credits (Certified Emission Reductions – CER’s) for each tonne of carbon dioxide equivalent “sequestered” or absorbed by the forest. In the case of World Vision’s Humbo project, revenue continues to be generated for the communities who manage the forest assets under seven cooperatives, representing almost 50,000 people.

“We understood that Haiti is an area that is being heavily degraded through deforestation, a high population and the need for fuels,” Morris said.

Devastating floods and landslides have also left bare many areas previously covered with forests, he noted.

World Vision’s point person on reforestation, Tony Rinaudo, recently visited Haiti and the Dominican Republic to examine the degraded landscape in the area.

“There is already a firm foundation to build on in some areas where present and past forestry and agroforestry projects had been implemented,” Rinaudo told IPS.
“I met individuals who valued and cared for trees – fruit, timber, charcoal – successfully.”

Rinaudo stressed that FMNR is certainly not a new concept since he “saw cases of it on some farm borders, in some cases within cropland”. But he said this understanding can be built on – to improve technique, scale up activities – and create greater awareness and practice.

“There is enormous potential for FMNR – for example, with prosopis which is a very aggressive thorny species. With systematic management a sustainable charcoal, pole, timber, honey, fodder industry could be established,” he told IPS.

Indi McLymont-Lafayette, regional coordinator for Panos Caribbean, which works to give voice to poor and marginalised communities, told IPS that some grassroots groups in Haiti were already actively involved in this issue.

“We have been working over the past two and a half years implementing a project looking at the rehabilitation after the earthquake,” she said.

“We include climate change and biodiversity issues with policy making. Part of that has entailed working with areas that have reforestation initiatives and one of the organisations in Haiti, Fondation Seguin, is very crucial, I think, for collaboration because they are already doing tremendous work in reforestation so I think World Vision could bring value to what is already being done.”

World Vision has had tremendous success with a community-managed forestry project in the Humbo region of Ethiopia, 342 kilometres south of the capital Addis Ababa. Over a 30-year crediting period, it is estimated that more than 880,000 tonnes of carbon dioxide equivalent will be removed from the atmosphere, making a significant contribution to mitigating climate change.

Prior to the project, Humbo’s mountainous terrain was highly degraded and chronically drought prone. Poverty, hunger and increasing demand for agricultural land had driven local communities to overexploit forest resources.

Another report released here shows that Haiti led the list of the three countries most affected by weather-related catastrophes in 2012.

A continuously growing urban population and an increasing demand for charcoal and fuel wood have all contributed to depleting Haiti’s natural environment. But Morris said the two Caribbean nations stand to reap many benefits from a forestry regeneration project.

“When we do this kind of work there are multiple benefits that can come from it, particularly in a coastal environment and environments that are exposed to storm activity,” Morris told IPS.

“The sorts of things that we would like to do by regenerating and planting trees are to enhance soil integrity; prevent erosion; build coastal land integrity for resilience to storm surge and coastal inundation; and to re-establish the natural asset base of the area for more sustainable usage over the long term.”

He said there could also be benefits in the form of increased food production, since “often we find that once we get into this technique – particularly around the water catchment areas and steep slopes – it can improve the soil integrity” for agricultural purposes.