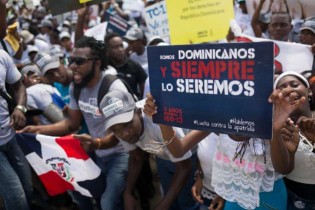 By Ivet González
“Sometimes we have too much water, which washes everything away,” Cecilia Joseph, originally from Haiti, said in heavily accented Spanish while pulling up a ñame root (a kind of yam) on her farm in the municipality of Santo Domingo Norte in the Dominican Republic.

By Patricia Grogg
One of the major difficulties to overcome in climate change adaptation policies in the Dominican Republic is society’s low awareness of the risks, even though this Caribbean island nation is seriously exposed to the impacts of the phenomenon.

Climate Change and Poverty, a Deadly Cocktail for Dominicans

By Patricia Grogg
"Nobody mourns the poor, you know." That is the grim conclusion of a resident of La Ciénaga, one of the many poverty-stricken settlements clustered along the banks of the Ozama River in the Dominican capital, and which are at the mercy of the weather.
ADVERTISEMENT ADVERTISEMENT