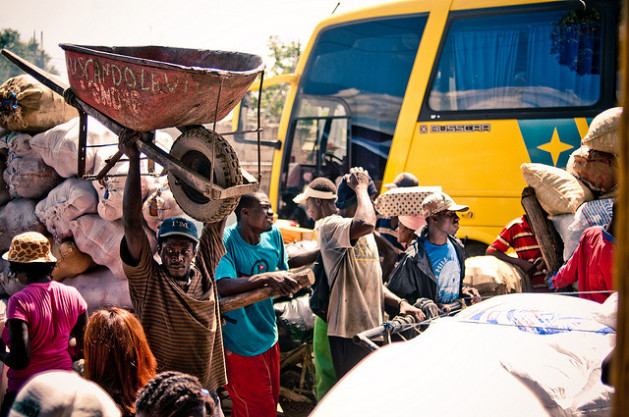 At the bustling border of the Dominican Republic and Haiti. Credit: Dan Boarder/cc by 2.0

PORT OF SPAIN, Nov 27 2013 (IPS) - Outraged at a court ruling that would potentially render stateless thousands of Dominican people of Haitian descent, the Caribbean Community on Tuesday suspended the Dominican Republic’s bid to join the 15-member regional grouping.

Dominican President Danilo Medina had reportedly promised that his government would not actually deport any of the persons affected by the Sep. 23 ruling.

“It renders an already marginalised section of the Dominican population even more vulnerable to acts of daily discrimination and abuse." -- Prof. Norman Girvan

However, Michel Martelly, Haiti’s president, said that soon after returning from Venezuela last weekend where he held talks with Dominican officials to resolve the issue, the authorities in Santo Domingo deported 300 people “who do not know the country, who do not have family in Haiti and who do not even speak the language.”

Martelly is threatening to stay away from future talks – the next round is scheduled for next week – if the Dominican Republic does not show some form of goodwill.

“We don’t have to keep meeting without them showing some action,” he told IPS, adding that the deportees included children, some “as old as one day”.

Trinidadian Prime Minister and CARICOM chair Kamla Persad-Bissessar vowed to raise the matter with the Association of Caribbean States (ACS) and the Community of Latin American and Caribbean States (CELAC). A delegation from the Inter-American Commission on Human Rights (IACHR) is also visiting the Dominican Republic early next month.

“It is especially repugnant that the ruling ignores the 2005 recommendations made by the IACHR that the Dominican Republic adapts its immigration laws and practices in accordance with the provisions of the American Convention on Human Rights,” she said. “The ruling also violates the Dominican Republic’s international human rights obligations.”

St. Vincent and the Grenadines Prime Minister Dr. Ralph Gonsalves, who had written two letters to President Medina on the issue, said he was also prepared to push for the suspension of the Dominican Republic from the Bolivarian Alliance for the Americas and the Caribbean Forum (CARIFORUM).

He told IPS that “quiet diplomacy” has led nowhere and “clearly we have to up the ante for the government and the relevant authority to act”.

At the heart of the controversy is the stripping of citizenship from children of Haitian migrants. The decision applies to those born after 1929 — a category that overwhelmingly includes descendants of Haitians brought in to work on farms.

CARICOM had come under increasing pressure from civil society groups in the region to respond strongly. Caribbean organisations that met in Colombia last week condemned the ruling as “immoral, unjust and totally unacceptable”.

“It renders an already marginalised section of the Dominican population even more vulnerable to acts of daily discrimination and abuse based on the colour of their skin and/or the sound of their names,” former ACS secretary general Professor Norman Girvan told IPS.

Caricom has an opportunity to “prevent a humanitarian catastrophe,” he said.

But efforts to pressure the Dominican Republic to soften the ruling – only the latest salvo in decades of cultural and economic tensions between the two nations – will likely prove an uphill task.

Earlier this month, Anibal De Castro, the Dominican Republic’s ambassador to the United Sates, responding to an article published in a Trinidad and Tobago newspaper, made it clear that his country “does not grant citizenship to all those born within its jurisdiction.”

“In fact, the United States is one of the few nations that maintain this practice. In most countries, it is the norm that citizenship be obtained by origin or conferred under certain conditions. Since 1929, the Constitution of the Dominican Republic has established that the children of people in transit, a temporary legal status, are not eligible for Dominican citizenship,” he wrote.

On Nov. 6, hundreds of people rallied in Santo Domingo in support of the ruling, even suggesting the erection of a wall to ensure the division of Hispaniola that is shared by Haiti and the Dominican Republic.

Emilo Santana of the group Night Watch of San Juan claimed that many Dominicans were unable to receive health services because the resources were being used to assist Haitians and urged President Medina to prevent a “silent and massive Haitian take-over of the territory.”

“I feel humiliated and angry, but not by my president, I feel humiliated by those NGOs that negotiate with the poverty of Haitians and it is they who are destroying our country,” Santana said at the rally.

Another speaker, jurist Juan Manuel Castillo Pantaleon, said the Constitutional Court “has aroused all Dominicans to defend as one man our national sovereignty”.

He described the ruling as a landmark “because it clearly defines who we Dominicans are and reaffirms the laws and institutions, as provided in the Constitution.

“The hypocritical international community which offered aid to Haiti never kept their promises and in some cases committed robbery, and intends that we Dominicans should assume responsibility for a failed state,” said Castillo Pantaleon.

A United Nations-supported study released this year estimated that there were around 210,000 Dominican-born people of Haitian descent and another 34,000 born to parents of other nationalities.

In a statement, CARICOM said it was calling on the global community to pressure the Dominican Republic to “adopt urgent measures to ensure that the jaundiced decision of the Constitutional Court does not stand”.

“The government must show good faith by immediate credible steps as part of an overall plan to resolve the nationality and attendant issues in the shortest possible time.”