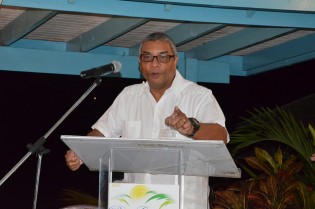 By Peter Richards
Trinidad's Orange Grove Savannah sits at the foothills of the Northern Range, whose watersheds provide copious volumes of fresh water into the aquifers - natural underground water storage areas - lying below these green spaces.

By Peter Richards
Trinidad’s Orange Grove Savannah sits at the foothills of the Northern Range, whose watersheds provide copious volumes of fresh water into the aquifers – natural underground water storage areas – lying below these green spaces.

By Peter Richards
Four decades after they signed the treaty establishing the Caribbean Community (CARICOM), government leaders are gathering in Trinidad and Tobago, the birthplace of the integration process, as they seek to give greater meaning to the CARICOM Single Market and Economy (CSME) that encourages the free movement of nationals across the 15-member grouping.

By Peter Richards
First it was U.S. Vice President Joe Biden, who travelled to Trinidad and Tobago Tuesday to speak with "our friends” in the Caribbean.

By Peter Richards
Whether by accident or coincidence, recent days have seen a variety of Caribbean leaders and journalists question whether the region is failing to pursue leadership roles within international organisations - and thus losing its voice in global issues like trade, climate change, and peace and security.

By Peter Richards
Ricardo Bharath-Hernandez, like most citizens of Trinidad and Tobago, has probably lost count of the millions of dollars being spent to renovate the Greek revival style “Red House” that serves as the parliament building in the oil-rich twin island republic.

By Peter Richards
Ruth Dreifuss, the former Swiss president and chancellor of the University for Peace, may never have heard of Dennis Ramjattan, and vice versa, although they occupy opposite sides of a longstanding debate in this twin-island state.
Next Page »
ADVERTISEMENT ADVERTISEMENT