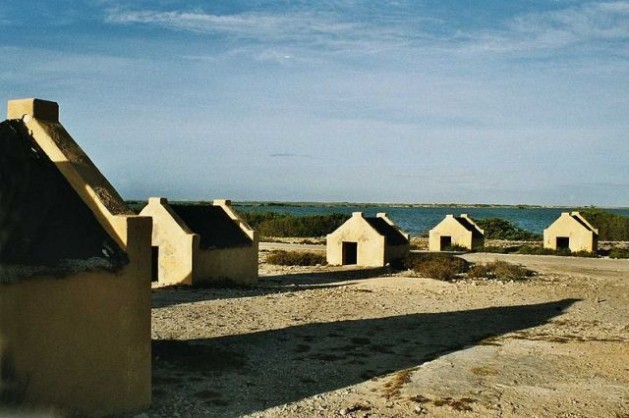 The slaves brought to the Caribbean lived in inhumane conditions. Above are examples of slave huts in Bonaire provided by Dutch colonialists. About five feet tall and six feet wide, two to three slaves slept in these after working in near by salt mines. Credit: V.C.Vulto/GNU license

PORT OF SPAIN, Trinidad, Jul 29 2013 (IPS) - As Caribbean countries prepare to observe Emancipation Day on Aug. 1, they are also caught up in an ongoing debate over reparations for slavery.

St. Vincent and the Grenadines Prime Minister Dr. Ralph Gonsalves, who has stated publicly that he will “take no quarter on those issues”, told IPS, “We have in my view a very strong case to put to an appropriate tribunal.”

Last week, as he addressed an audience in Cuba marking the 60th anniversary of the attack on the Moncada Barracks that launched the 1953 Revolution, Gonsalves said the Caribbean is demanding reparations from Europe for native genocide and African slavery.

“The principal reason for underdevelopment in the Caribbean and Latin America is the legacy of native genocide and African slavery, and we do so with the spirit and with the examples, in this new period, of the combatants of Moncada,” he said.

At the Caribbean Community (CARICOM) summit here earlier this month, Gonsalves presented his fellow leaders with three position papers, including one by Professor Hilary Beckles, the pro-vice Chancellor of the University of the West Indies, who recently published the book “Britain’s Black Debt: Reparations owed the Caribbean for Slavery and Indigenous Genocide”.

Gonsalves is pushing for a common position on reparations and has welcomed the decision to establish a committee under the chairmanship of the Barbados Prime Minister Freundel Stuart to drive the issue.

The committee, which will oversee the work of a CARICOM Reparations Commission, will include Trinidad and Tobago, Guyana, Haiti, St. Vincent and the Grenadines and Suriname, the chairs of national reparations committees, and a representative of the University of the West Indies.

Kafra Kambon, chair of the Emancipation Support Committee in Trinidad and Tobago, told IPS it is important for non-governmental organisations and the Caribbean population in general to support the initiatives of regional governments.

Kambon, whose grouping organises the annual Emancipation Day activities here, said that the support is necessary since he believes “European governments are going to try to corral them [Caribbean leaders] or even pressure them to abandon the idea.

”We have to give the strength to that call for reparations as a principle,” Kambon told IPS, calling the slave trade “massive crimes that go beyond the human imagination”.

“People have been damaged psychologically, we came out of slavery suffering extreme trauma,” he said.

“We were not behind Europe at the time of the contact and some people think of slavery as a rescue mission. It was not,” he said, adding that “slavery represents a generation of people that have been wiped out”.

In the Dutch country of Suriname, the National Reparations Committee said it would seek consensus and awareness for the correct version of history.

“We’re going to bring this dead information about reparations for slavery and about the genocide of our country’s first inhabitants to life,” said the committee’s chair, Armand Zunder, who has applauded the move by CARICOM.

“We thought we would be fighting this fight on our own, but we know now we have full support. We have made big strides,” said Zunder, an economist, who earlier this month filed the first ever petition to The Netherlands for reparations to the descendants of slaves in Suriname.

Zunder said that previously published research results that showed that the Netherlands earned some 125 billion euros from Suriname during slavery.

Meanwhile, the Pan-Afrikan Reparations Coalition in Europe (PARCOE) has written a lengthy letter to Caribbean leaders warning that their “top down approach” will “end up not achieving the reparations aspirations of the masses of Afrikan descendants and indigenous citizens in the Caribbean.”

PARCOE co-vice chairs Esther Stanford-Xosei and Kofi Mawuli Klu wrote that the Caribbean should seek to avoid “the same errors that were made with the former Organisation of African Unity’s (OAU) Group of Eminent Persons (GEP) in failing to effectively consult on reparations strategies, be informed by and act in the best interests of the various Afrikan countries respective citizenries”.

They cited the work of the U.S. activist and law professor, Mari Matsuda, who argues that approaches to reparations incorporate a more grassroots, “bottom-up” approach.

“By ‘bottom’, Matsuda refers to the lived experience of those individuals and groups who are alleging the violation of rights rather than those who have traditionally defined the scope of legal redress such as judges, lawyers associations and other groups who are part of upholding the existing social, legal and economic status quo,” they wrote.

PARCOE is also urging Caribbean countries not to be taken in by the recent “historic victory for the Mau Mau survivors of British colonial era torture and abuses in detention committed between 1952 and 1963 during Britain’s suppression of the Mau Mau war of liberation”.

PARCOE said the “the financial compensation aspect of the settlement represents a paltry sum and is not commensurate with the torture and suffering of Mau Mau patriots considering that the British Government paid out £20 million, the modern equivalent of around £16.5 billion, to compensate some 3,000 slaveholding families for the loss of their ‘property’ when slavery was purportedly abolished in Britain’s colonies in 1833.”