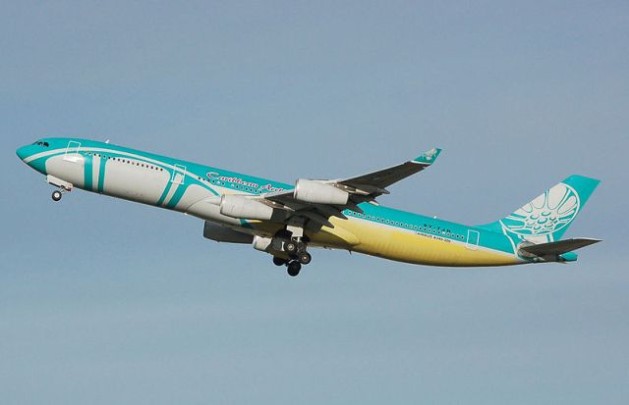 A Caribbean Airlines Airbus A340-300 takes off from London Heathrow Airport, England. The airline has come under fire from other regional carriers for its fuel subsidies. Credit: Adrian Pingstone/public domain

PORT OF SPAIN, Trinidad, Jul 1 2013 (IPS) - Four decades after they signed the treaty establishing the Caribbean Community (CARICOM), government leaders are gathering in Trinidad and Tobago, the birthplace of the integration process, as they seek to give greater meaning to the CARICOM Single Market and Economy (CSME) that encourages the free movement of nationals across the 15-member grouping.

“There is no doubt that efficient transportation within the region, especially in the context of fulfilling the dream of unfettered movement of people and goods within the CARICOM Single Market, and facilitating the growth of tourism that is so germane to the development of the Caribbean, is of critical importance,” the Guyana-based CARICOM Secretariat said in a statement.

"Everywhere in the world you have airline alliances...in our region we don’t have it. These things defy logic." -- CARICOM Secretary General Irwin La Rocque

The special session of the 34th summit slated for Jul. 3-6 in Trinidad and Tobago will be largely devoted to transportation, particularly what it called “the vagaries of air and sea transport and border control policies”.

The Inter-American Development Bank (IDB) is now assisting in the development of a comprehensive regional transportation plan.

However, for as long as the regional integration grouping has been around, Caribbean governments have found it extremely difficult to establish a single airline to facilitate trade and the movement of people, even though there are at least six national airlines traversing the region.

“We are trying to find solutions and in my own personal view it defies logic why is it we have all these airlines, all of them struggling, and they can’t cooperate,” CARICOM Secretary General Irwin La Rocque told IPS.

“There ought to be cooperation between the airlines. For whatever reasons, perhaps the business models, and there is a notion of airlines just like currency being a symbol of nationhood, which is a lingering thing from the past,” he added.

St. Vincent and the Grenadines, Barbados, Antigua and Barbuda and Dominica, the owners of the island-hopping airline LIAT, have long been unhappy with oil-rich Trinidad and Tobago, which provides a subsidy to its own national airline, Caribbean Airlines (CAL).

While he insists that he does not want a public squabble with Port of Spain, St. Vincent and the Grenadines Prime Minister Dr. Ralph Gonsalves, the chair of the LIAT shareholder governments, said he intends to raise the matter during the summit here with Prime Minister Kamla Persad Bissessar, who will also assume the chair of the regional grouping for the next six months.

“That is on the fuel subsidy side. It is estimated by the management that during that five-year period we lost 78,000 passengers to CAL because of their subsidy, and the revenues which we would have lost as a result of that unfair competition would have been 10.2 million dollars,” he added.

Earlier this year, Trinidad and Tobago Finance Minister Larry Howai said CAL received a subsidy of 40 million dollars in 2012, a situation Gonsalves said is a violation of the CARICOM treaty and Common Air Services Agreement among member countries.

La Rocque told IPS that the summit will consider recommendations from a special Council for Trade and Economic Development (COTED), comprising transport ministers from the region who met last month to discuss the issue.

“Everywhere in the world you have airline alliances…in our region we don’t have it. These things defy logic and I don’t think we are going to get a solution at the heads (regional governments) but at least a process for bringing it forward.

“One of the recommendations is that the shareholders of the respective airlines be encouraged to sit and have a discussion,” he said. “Rather than working at odds with each other, they ought to sit down and have a discussion and come up with a model. The bigger airlines are doing it, so why can’t we do it in our Caribbean?”

Transportation woes aside, the regional integration process also faces an uphill task to convince the Caribbean population of its relevance in a changing global environment.

“I simply say, just think about it – if there wasn’t a CARICOM. We do not have a perfect situation, but if we did not have a CARICOM for us to cooperate and do all the many things that we put in place to do. This year is 40 years since the Caribbean Examination Council has been around, it is the same heads of government that created CXC,” La Rocque said.

“We have had some successes. We tend to forget that because obviously there is an impatience given the pace of integration, one recognises that…CARICOM is here to stay.”

In an editorial critiquing CARICOM’s record, the Jamaica Observer newspaper noted that despite being the world’s second oldest integration movement after the European Union, the bloc has been unable to advance significant trading opportunities among the 15 countries.

“The facts show that intra-regional trade has grown in every trade bloc except CARICOM,” the paper said, asking the question “will CARICOM remain the bloc that the builders reject?”

La Rocque disagrees. He said the movement has always “recognised that because of the nature of our economies that trade would be limited and it could never be as high as what obtains in the European Union”.

He told IPS there are many factors for that, such as small economies, small productive bases and, in most cases, economies that are similar “in terms of what we produce”. Despite that, intra-regional trade has grown by 16 percent, “but there is still room to grow and now we have to focus on what are these elements that would allow it to grow,” he said.

The agenda for the four-day summit will for the first time pay special attention to the differently-abled community in the region, as well as discuss possible reparations for slavery.