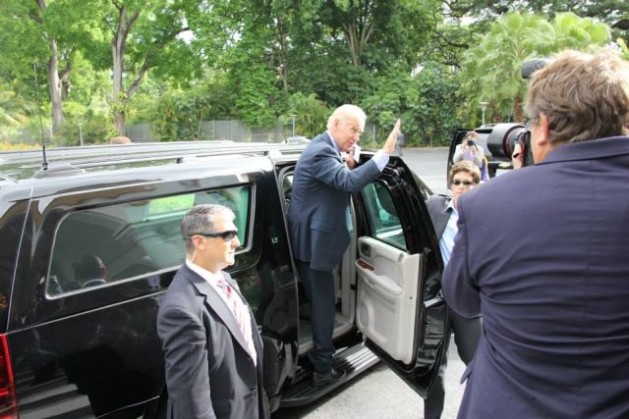 PORT OF SPAIN, Trinidad, May 30 2013 (IPS) - First it was U.S. Vice President Joe Biden, who travelled to Trinidad and Tobago Tuesday to speak with “our friends” in the Caribbean.

And on Friday, China’s newly elected president, Xi Jingping, will arrive in Port of Spain for talks with eight Caribbean Community (CARICOM) leaders that Beijing says will “further increase political trust and consolidate friendship and cooperation with the entire region”.

Biden left here on Tuesday after a 21-hour visit during which time he held “frank and cordial” discussions with leaders of the 15-member CARICOM grouping, a precursor to a meeting with U.S. President Barack Obama.

“I am hoping that the meeting with President Obama will take place this year,” St. Kitts and Nevis Prime Minister Dr. Denzil Douglas told IPS.

“The Caribbean has never downplayed the importance of the United States to its growth and development and I think direct conversations with President Obama will also signal our importance to our big neighbour up north,” said Douglas.

He will not be among those attending the meeting with the Chinese leader as his twin-island federation, despite China’s insistence on a “One China” policy, maintains diplomatic relations with Taiwan, which Beijing regards as a renegade province.

Newly re-elected Grenadian Prime Minister Dr. Keith Mitchell said that in talks with both Biden and Obama, officials will bring up the issue of deporting Caribbean-born criminals back to the region.

“Clearly this is an issue we have to deal with but we have accepted the fact the U.S. government made that decision and we are not going to get that changed,” he told IPS, adding that “Mr Biden wants a serious story to go home with.”

Biden has made it clear that Washington wants to “able to play a part in the overall development of the region” and that the trade investment framework agreement (TIFA) which he signed before his departure should be viewed “as a vehicle that would overcome special specific practical barriers to trade and investment and accommodate those changes as rapidly as possible.

“Our goals are not simply growth but it is growth that reaches everybody, and we spoke today from poverty measures to support for small businesses to greater opportunities for all citizens regardless of their gender and their sexual orientation,” Biden said.

Washington has promised the region assistance in a wide range of areas including security, immigration and renewable energy, as well as dealing with the impacts of climate change.

“There is probably no group of nations better situated to take advantage of renewable energy possibilities than here in the Caribbean,” Biden said.

On the issue of security, Biden said he made it clear to the regional leaders that Washington approaches “this as a shared responsibility” even while acknowledging that the “successful” policies of the past may now be forcing those involved in the illegal drug trade to target the Caribbean.

The United States has spent more than 200 million dollars through the Caribbean Basin Security Initiative (CBSI) launched in 2009 and 30 billion dollars on reducing drug demand.

“We were so successful collectively in the decades of the 80’s and 90’s that the preferred route to get to the United States from South America of cocaine, and some heroin and other products was no longer through the Caribbean but through the Isthmus and Central America,” he said.

“Now because of the significant initiatives we have with our Central American friends, the concern legitimately served by many is that it may move back into the Caribbean and on a greater scale than they exist now.”

The Chinese president, who will also travel to Washington for talks with President Obama on Jun. 7, is hoping that his discussions with the Caribbean leaders will further promote cooperation and inject new vitality into their bilateral ties.

“China always holds that all countries, no matter big or small, rich or poor, strong or weak, are equal members of the international community,” the Chinese Embassy said in a statement ahead of the visit, adding that Beijing would “like to expand our exchange and cooperation in politics, economic, culture, etc, so as to advance bilateral relations in a sound and healthy way”.

Beijing said that its “friendly relations with the Latin America and Caribbean (LAC) region have been growing significantly stronger in the past ten years” and President Xi’s visit comes at “an important time for both China and the LAC region, and even more so for the English-speaking Caribbean Community (CARICOM) region”.

“China-LAC ties are also flourishing multilaterally in the new global dispensation. LAC states can today access new forms of bilateral and multilateral China aid through the recently established Community of Latin American and Caribbean States (CELAC), as well as through wider regional economic and financial entities such as the Inter-American Development Bank (IDB) and the Caribbean Development Bank (CDB). China is a contributing and non-borrowing member of both institutions.”

Professor Andy Knight, director of the Institute of International Relations at the University of the West Indies (UWI), said that the visits of the two leaders send a strong signal.

“The U.S. better realise that if it ignores the Caribbean and Latin American region, China is prepared to fill the power vacuum right in America’s backyard,” he told a local newspaper.

“What is interesting about these visits is that they are occurring within days of each other. The U.S. can be accused sometimes of neglecting the Caribbean…China, in its quest for energy sources wherever it can find them, is paying attention to Trinidad specifically because of this country’s oil and gas deposits.”

Trinidad and Tobago’s Energy Minister Kevin Ramnarine said that while the United States and China are two of the largest consumers of energy in the world, Biden had indicated that the United States had shale gas reserves for 100 years and was on the way to becoming self-sufficient.

Ramnarine said with 63 percent of methanol, 85 percent of ammonia and 39 percent of outputs from the local refinery going to the U.S. last year, Port of Spain will now have to find new markets and that energy issues will feature prominently in the discussions with president Xi.