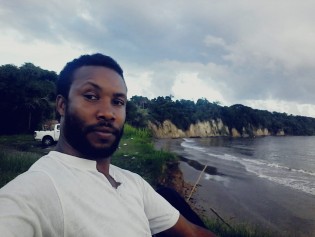 By Jewel Fraser
Trinity Hills in Trinidad and Tobago’s southeast region, also affectionately known as the Three Sisters, is home to a wildlife sanctuary that serves as a sort of incubator for fauna to reproduce and replenish the surrounding forest reserves of the Victoria-Mayaro region that includes the communities of Guayaguayare and Moruga. But a draft management plan for the Trinity Hills environment project and reports from surrounding communities suggest that urgent action is needed to prevent losses to the sanctuary and forest reserve.

From Brown to Green Again, Trinidadians Reclaim a Forest

By Desmond Brown
Thanks to committed involvement by the local community, the Fondes Amandes Community Reforestation Project has transformed this area of Trinidad from a bare, dusty hillside to one where tall trees flourish, fruit trees grow alongside flowering plants, and more wildlife returns each year.

By Desmond Brown
At 24 years old, Stefan Knights has never been on the side of those who are sceptical about the reality and severity of climate change.

By Jewel Fraser
An initiative to reduce the carbon footprint of Tobago’s tourism sector may be stymied by “bread-and-butter issues” and the failure of government authorities to vigorously pursue the initiative.

By Jewel Fraser
Trinidad and Tobago holds the dubious distinction of being among the top 10 emitters of carbon dioxide per capita in the world, much of it due to the petrochemical industry that is the main driver of its economy.

By Jewel Fraser
Industrial engineer Ancel Bhagwandeen thinks that growing your food indoors is a great way to protect crops from the stresses of climate change. So he developed a hydroponic system that “leverages the nanoclimates in houses so that the house effectively protects the produce the same way it protects us,” he says.

By Jewel Fraser
In the southwest peninsula of Cedros, one of Trinidad’s driest areas, Jenson Alexander grows the cocoa used for many years by the British chocolate giant Cadbury.
Next Page »
ADVERTISEMENT ADVERTISEMENT

Put People Before Profits for Progress

Q&A: On the Frontline, Islands Aim to Seize Climate Initiatives