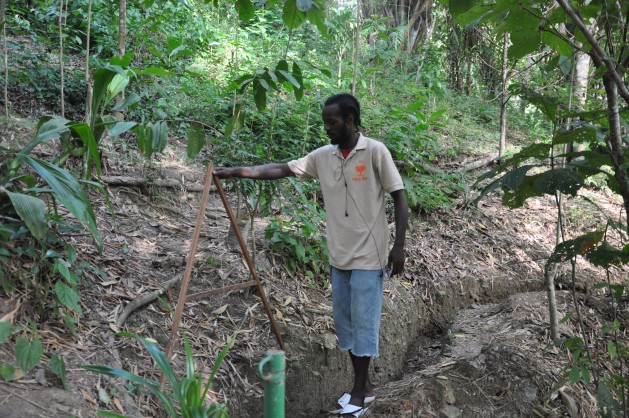 FONDES AMANDES, Trinidad, Feb 18 2015 (IPS) - Not far above Trinidad’s capital, Port-of-Spain, in a corner of the St. Ann’s valley in the Northern Range, the community of Fondes Amandes has come together since 1982 to respond to climate change.

Locals have also witnessed increased rainfall in the area, in which the rainy season has encroached on the dry.

Akilah Jaramogi, who started the Fondes Amandes Community Reforestation Project (FACRP) 32 years ago with her now deceased husband, told IPS they have managed to reclaim and revive the forest and river.

“Coming to Fondes Amandes in the early 1980’s I was really happy to be part of this watershed, but that was only in the rainy season. In the rainy season the place would be really green and nice, but come dry season it was a different story,” Jaramogi told IPS.

“The place would turn brown, then from brown it would turn grey, and then bright fires in the night; the hillsides burn up and that was the whole issue. The trend at Fondes Amandes here, forest fires during the dry season and floods around the watershed during the rainy season. So for me, coming from a rural community in south Trinidad it was something strange to me…it was heartbreaking.”

The Fondes Amandes Community Reforestation Project has transformed the area from a bare, dusty hillside to one where tall trees flourish, fruit trees grow alongside flowering plants, and more wildlife returns each year.

And not since 1997 has a bush fire broached the system of fire traces and quick community action developed to protect the watershed.

Jaramogi said climate change is a reality for the community, and the change has affected the quality and yield of fruit trees. She noted the impact on citrus, mangoes and avocados. She said it makes sense for individuals and communities to be prepared.

“Over the years I’ve noticed drastic changes in the weather pattern. We no longer have a dry season or a rainy season, so for the past years we have had extremely dry weather conditions. This year we had a really long dry season that resulted in tremendous forest fires around Trinidad and Tobago,” Jaramogi explained.

She said one of the reasons for the longevity and success of FACRP is the involvement of the community.

“In spite of all the challenges, we are able to keep on going because we are community-based. Most of the members are from right here, and there is a sense of ownership – pride in our natural environment. That is what also attracts our supporters to continue to keep up their relationship with Fondes Amandes. With or without funding, they come out to deal with what has to be done.”

Akilah’s daughter, Kemba Jaramogi, also gives support to the Project. She is a trained firefighter and dedicated protector of the forests.

She explained that although fires sometimes burn outside of FACRP’s reforestation project area, this does not deter its volunteers from fighting them, even if it means trekking two hours to the fire site.

She outlined some of the challenges facing FACRP and mentioned a few simple things that could help contain fires before they get out of hand.

“First, there needs to be better coordination between the firefighting units of the Forestry Division, National Reforestation groups and forestry NGOs. Second, these groups need access to better equipment,” she said.

“FACRP, for instance, lacks basic bushfire fighting equipment like Back Pack Fire Pumps. These are water tanks with a pump that can be strapped to a firefighter’s back. Thirdly, the National Security helicopters have been fighting fires from the air with Bambi Buckets (specialised buckets which carry water suspended by cable from the helicopter), but this is often done when the fires are already out of control.”

“A more effective use of this air power would be to equip the choppers so that firefighting crews can be dropped near remote fires while they are still manageable, much like the equipment afforded to smokejumpers.”

A smokejumper is a firefighter that parachutes into a remote area to combat wildfires. Smokejumpers are most often deployed to fires that are extremely remote.

“A fourth solution could involve training and employing the T&T Regiment to fight fires during fire season,” she added.

In Trinidad and Tobago, it is illegal to light fires outdoor during the dry season.

Kemba Jaramogi said that despite Trinidad and Tobago’s oil wealth, the country does not have a working national action plan for fighting forest fires, i.e. trained personnel with equipment and protective gear and a proper pay package with health insurance – due to the risky nature of the job.

She wants the authorities to explore options for a forest and bush fires action plan, noting that “we cannot wait until the hills are all degraded in the dry season and eroded in the rainy season to realise the importance of our forests.”

The FACRP is currently funded by the Trinidad and Tobago government though its Green Fund. Other partners include several state agencies: the Water and Sewerage Authority, the Forestry Division of the Ministry of Housing and the Environment, and the Office of Disaster Preparedness and Management.

Gabrielle Lee Look, Communications Officer for the GWP-C told IPS, “Since our partnership with them, not only have they been active, but we have been able to collaborate with them in different ways like the rainwater harvesting system that’s actually on the compound here that supports the project when they have very limited water is something that we take pride in and we’ll continue to support Fondes Amandes in terms of their activities.”

The Project has won several awards, including the Humming Bird Medal national award in 2007, recognising FACRP’s national service in the sphere of environmental conservation. FACRP has also won the Green Leaf Award, Trinidad and Tobago’s highest environmental honour, and was named by CANARI as a model for community forestry throughout the Caribbean.